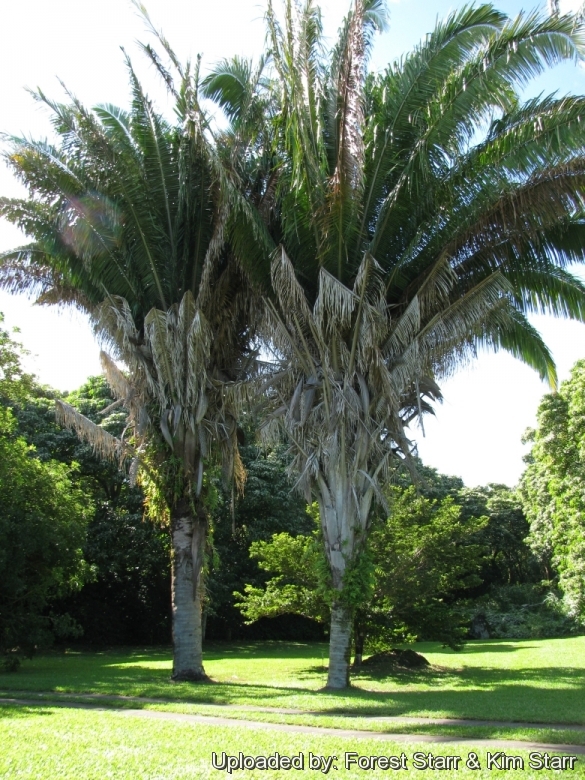 Description: Attalea butyracea (syn. Scheelea butyracea) is a huge solitary palm with large erect and gently arching leaves. It is completely spineless. It may be confused with the “Royal palm” (Roystonea regia).
Trunk: Tall, broad, single, 3 to 20 m tall (occasionally up to 45 m) of height and 35-50(-75) cm of diameter, grey with slight horizontal constrictions, often covered with persistent leaf bases.
Crown: with 15 to 40 leaves.
Leaves: Pinnate, very large, 3-12 m long often curved.. Leaflets (pinnae) 180 to 240 pairs, up to 1 m long evenly spaced, arranged vertically on one plane, sometime irregularly arranged and clustered in on young plants. Petiole very short or absent, sheats and petiole with stout, stiff fibres.
Flowers: Monoicous (having distinct male and female flowers on the same plant) Inflorescences many-branched racemes borne among the leaves with large persisting spathes, fist 2-4 all-male inflorescences are produced followed by a female, and then the pattern is repeated. Flowers are white to yellowish.
Fruit: 5 to 7 cm in length by 3 to 8 cm of diameter, exocarp green when immature and dark-yellow to wine-red when mature, mesocarp fleshy orange, and endocarp fibrous and very hard with one to three seeds. Fruit are very numerous and a single raceme may weight up to 50 kg or even more!
Seeds: About 3-4,5 cm long and 2,5-3 cm in diameter with up to 60% of oil content. 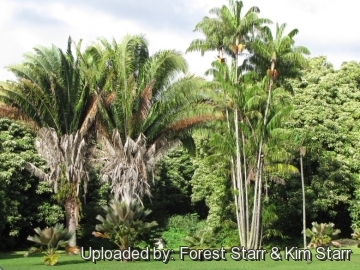 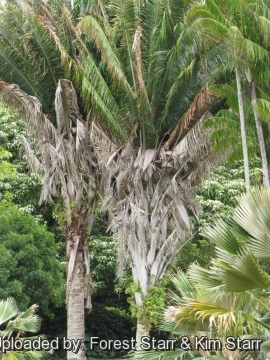 Cultivation and Propagation: It is a very large (massive) easy to grow palm that likes sandy soil, but is adaptable to clay and loam both slightly alkaline and acidic. It is a great palm in a boggy spot where the land has been raped, and drainage is not so good.
Fertilization: Need a perfect fertilizer diet including all micro nutrients and trace elements or slow release fertilizer. Micronutrient deficiencies are occasional problems. If it doesn't get enough Mn and Fe, the leaves take on a rather unhealthy yellow colour. Micronutrient deficiencies only show up on soil with a high pH.
Watering: It thrives in consistently moist soil and put on rapid growth with this ample water, and will also tolerate poor drainage, but it does not like to sit in continually wet, mucky soil.
Light: Prefers full sun but will tolerate half day sun.
Hardiness: Some cold tolerance. This palm has tolerated occasional temperatures down to –2ºC. However it can be difficult to get it to look its best without a great amount of heat and sun and so it is only really suited to the tropics in frost-free regions (USDA Zones 10-12)
Aerosol salt tolerance: It is moderately salt tolerant and does a lot better inland then it does on the coast.
Wind tolerance: It dislike hot dry winds.
Maintenance: Prune diseased, damaged or drying fronds, but do not prune if the frond still has some green colour. Palms recycle nutrients from dead or dying fronds and use them for healthier fronds. Palms only have a set number of new leaves that can sprout and grow per year and removing fronds will not increase that number. If you cut off more than what will grow annually, you could be left with a pretty bare and bald Palm.
Roots: Not a problem.
Gardening: Either as a single specimen or in groups, this is a strikingly beautiful species. Its very neat appearance and stature makes it perfect near highways and used to accent residential landscapes. A shade screen patio will provide an excellent environment for young specimens which can eventually be planted in a sunny location.
Food uses: The pulp of the fruit is used to prepare drinks and can be made into a fermented drink while the oil extracted from the kernel is edible. A wine-like beverage is obtained cutting down the palm and a cavity excavated in the trunk. This fills with a creamy or yellowish syrup which can be consumed fresh or fermented.
Traditional Uses: The fronds are widely used for thatch roofs, and different part of the palm has some particular uses.
Ritual uses: The young leaves have traditionally been used by Catholics in religious processions on Palm Sunday.
Remarks: Few people are aware of just how large this palm can get, and one often sees it planted in places where its going to cause real problems later on.
Propagation: Fresh seeds germinate quickly and the seedlings are attractive. Young palms are often found under palms that have been allowed to produce fruit. It is not unusual to see offspring growing in the old leaf boots of a mature tree.