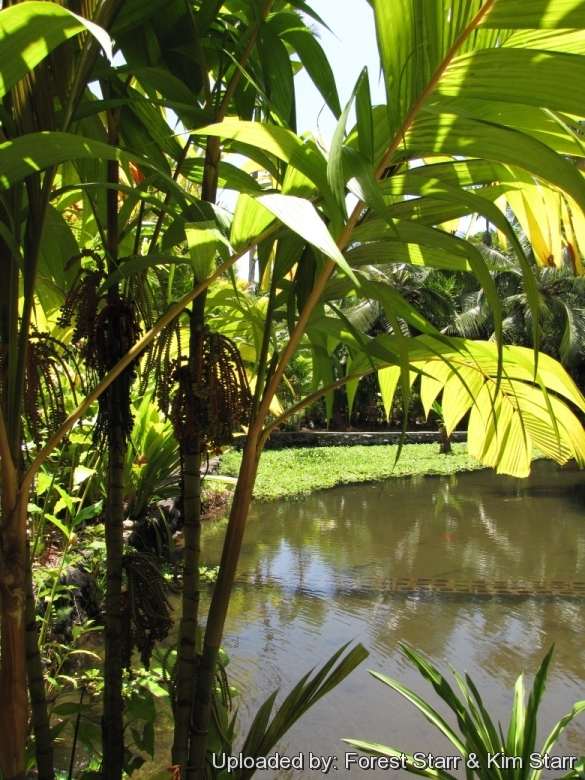 Origin and Habitat: Indonesian islands of Java and Sumatra, Andaman Islands and the Greater and Lesser Sunda Islands
Habitat: It grows in the understorey of humid in shaded rain forests at low altitudes.

Description: Pinanga kuhlii is one of the more common Pinanga's. It is a variable, suckering (multiple trunk) truly unique palm with the clumping characteristic of Areca palms, but doesn't get as tall in growth habit, and rarely reach the 6(-10?) metres of height (but usually less than 3-6 metres in cultivation). The flowers stalks and fruit are bright red to blackish and very attractive.
Remarks: Some taxonomist lump this species with Pinanga coronata.
Trunk: Thin, slender, bamboo-like, 3-5(-7) cm in diameter, smooth, pale green to ivory-coloured, from where stand out the rings marking the junction of the fallen-off leaves.
Crownshaft: Short yellowish.
Leaves (fronds): Irregularly pinnate (feather shaped), quite large, 1,2-1,5 m long and 70-80 cm wide, simple to partially divided in few dark green, pleated segments (leaflets) of varying length, with sharp, or blunt-ended and indented, extremity. Leaves are often pinkish coloured and lightly mottled especially when young.
Inflorescence: Ramified and hanging, coming from below the crownshaft, the flowers of both sexes are bowl-shaped, small and pinky white or greenish and turn reddish with age.
Fruit: Ovoid, about 12 mm long, red turning to black when ripe. Pinanga kuhlii is a rapid grower and reaches the fruiting stage in about four or five years. 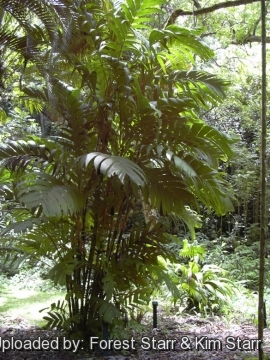 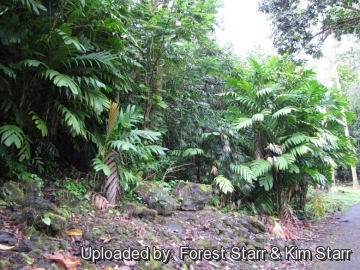 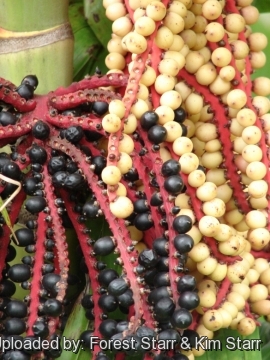 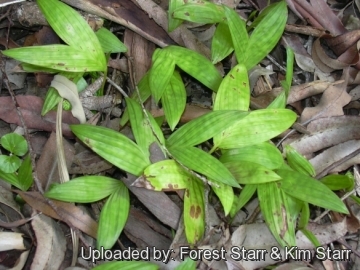 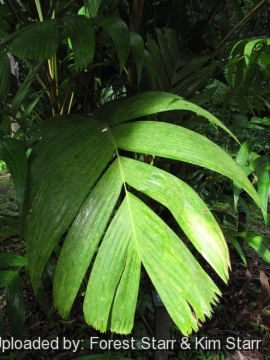 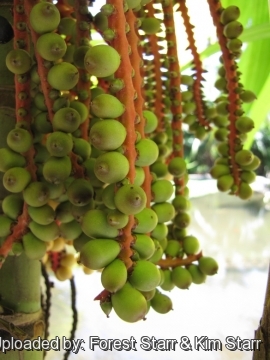 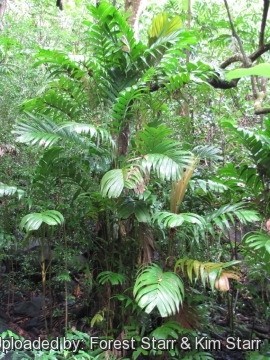 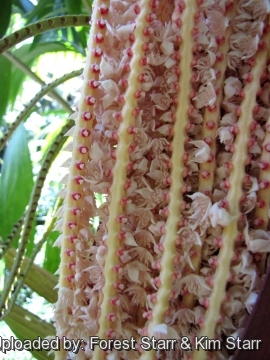 Cultivation and Propagation: Pinanga kuhlii is an excellent moderate to fast-growing palm popular among tropical palm collectors adapt to tropical and subtropical climates. It is also one of the most elegant and durable indoor palms. It is perfect, both for container planting or grown on the ground, and ideal too for indoors or outdoors.
Soil requirements: It prefers fertile, organic, moist, well drained soils except those that are constantly soggy. However it is widely adaptable including those that are neutral, acidic, clayey and slightly alkaline, provided they are free-draining.
Watering: Pinanga prefers very copious waterings (less if well mulched) and should be watered before the soil completely dries. Help soil conserving its humidity with heavy groundcover mulch, which affords a rich decaying organic base. Pinanga roots are shallow, and spreading, so it loves to explore and insinuate themselves into this rich mulch, which must be constantly wet. Don't let sit in water. Indoor, potted Pinanga should not be over-watered.
Light: Outside in dappled light to deep shade, it grows well also on an eastern exposure, featuring filtered morning sun, but can stand full sun in the tropics (high constant atmospheric humidity), though the leaves may sometimes get scorched by direct sunlight. Young specimens need protection from direct sunlight and grow best in shady to partly shady locations. If home-grown, they look their best in bright diffuse light but tolerate low light levels. When growing as a patio palm, it would be a good idea to remember that they should not be grown in direct sun.
Fertilization: Need a perfect low-release fertilizer (e.g., 18-18-18) diet including all micro nutrients and trace elements, for enhanced vigour of top growth (a deeper green), but any specific palm Fertiliser would be fine, along with occasional Mg & Mn Sulphate soil "drenches".
Aerosol salt tolerance: Not tolerant, so beachside planting would not be a good idea.
Hardiness: They grow well in tropical and subtropical climates (USDA hardiness zones 10-11), and mature, established specimens can tolerate temperatures ranging from 0° C to 40° C. Best above 10.C. It will burn with any frost so is best planted with plenty of protection over and around palm. (though some plants have tolerated a winter minimum temperature of -2 C for a very short time).
Wind hardiness: Protect it from air movement, and keep some air humidity around it. It cannot tolerate at all sweltering heat and windy conditions, remember, this is an understory rainforest tree!
Maintenance: It will rarely need pruning only removal of browned-out fronds or leaves. Remove spent flowering spikes to avoid harbouring pests such as mealy bugs.
Propagation: By fresh seeds that germinate in 3-4 months, but the seeds remain viable longer than those of most species in this genus.
Use: It is grown in open air, in the sub tropical and warm-temperate zones, for the decoration of parks and gardens, in a partly shaded to shaded location when young, and regularly watered. It is also used as indoor plant, for its elegance, since the very first years of age, the adaptability to conditions of scarce luminosity, and the absence of particular attentions, render it, still now, one of the most utilized palms, for the decoration of indoor spaces. When young it is well suited for table decoration.
Disease & Pests: Generally, it’s free of serious diseases and pests. Protect from frost.