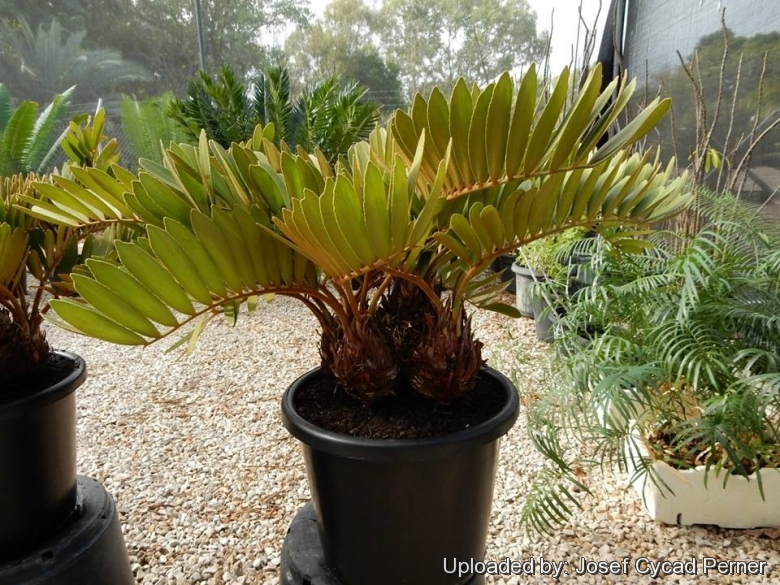 Origin and Habitat: Zamia furfuracea is restricted to just a single location in Veracruz state, south-eastern Mexico, but widely cultivated in tropical and sub-tropical areas all over the world. It is also a popular and easy to grow house plant.
Habitat: It grows in the warm sandy coastal plains mostly on the coastal dunes, close to beaches, on nutrient-poor soil, amongst arid thorny scrub or on limestone cliffs. Rainfall averages more than 2000 mm per annum, falling mainly in summer. Temperatures are 20-30° C in summer 10-20° C in winter.
Altitude: Sea level to 200 metres.

Description: Including the leaves, Zamia furfuracea typically grows 0,7 to 1,3 m tall, but occasionally in very favourable environments eventually reaching to 2,40 m tall. After Cycas revoluta it is without doubt the second most commonly grown cycad.
Stem (trunk): Short, solitary or branching dichotomously with age, thick, fleshy and more or less tuberous that serves as a water reservoir in times of drought, subterranean to shortly epigeous in older plants to decumbent in cliff dwelling plants globose to cylindrical, up to 20 cm broad and 20-50(-150) cm long, usually marked with scars from old leaf bases.
Crown: With 6-30(40) overlapping fronds spreading from the centre of the trunk forming a loose, symmetrical rosette with a width up to 1,8 m. When grown in bright sunlight the rosette becomes quite erect up to 90 cm high while fronds remain almost horizontal in shade. The crowns resemble fern or palm fronds.
Leaves (fronds): 1-pinnately divided, 30-150 cm long with a petiole 15-30 cm long, sparsely to densely prickled and dilated into a rounded concave form at the base, rachis with 6-12 pairs of leaflets (pinnae) 8-20 cm long and 2-5 cm, regularly widening toward the apex, wide oval, obovate or wedge-shaped, cuneate basally, rigid, leathery to almost woody, straight, medium-green, lower half leaflets broadly acute quite entire, upper half leaflets somewhat toothed at the extremity. They are smooth from the middle to the tip in the upper face, densely pubescent (scurfy) adaxially and feel a little like cardboard when rubbed; The pinnae are readily detached from the rachis by a well-marked line of articulation. Cataphylls broadly expanded basally, lanceolate and acuminate apically, 4-5 cm long and 2-3 cm wide. or acicular and 7-10 cm long and 2-3 cm wide.
Flower: Male cone (pollen-producing) and female cone (seed-producing) are produced on separate plants. Female cone tan to to rusty-brown in the centre of the female plant, cylindrical to ovoid-cylindrical, acute apically, 10-20(25) cm long, 5-7 cm in diameter; peduncle 15-20 cm long. Male cone smaller 1-6 per cluster, tan to brown, cylindrical to ovoid-cylindrical, acute apically, 8-12 (15) cm long, 1.5-2.5 cm in diameter; peduncle 2-6 cm long. When wounded a mucilaginous liquor ooze out hardening into a pellucid gum.
Blooming period: Even very young plants produce these interestingly shaped cones.
Seeds: When ripe, the female cone breaks to reveal an array of tightly packed seeds, 7-10 mm long, 3-5 mm, fleshy, brightly crimson-coloured.
Remarks: Zamia furfuracea is actually related to conifer and Ginko biloba trees and is one of the most primitive living seed plants (a living fossil) as its kind surviving on earth since the time of the dinosaurs. Cycads have changed very little in the last 200 million years. Fossils have been found on almost every continent on the planet. 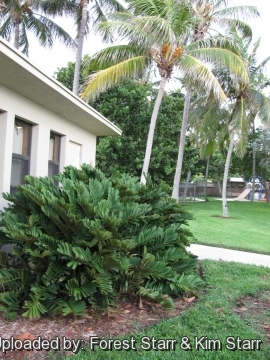 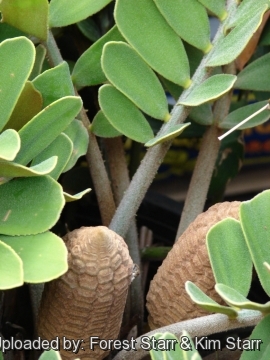 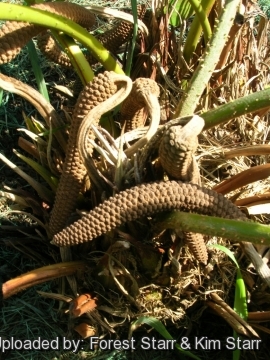 Cultivation and Propagation: Zamia furfuracea is easy to grow and a very popular plant in cultivation. Because of its ruggedness, low maintenance and drought tolerance t is the species which is most commonly grown in tropical and subtropical regions. Usually slow growing, however good conditions can speed it up considerably. Large numbers of this plant are cultivated as an indoor plant in temperate countries.
Exposition: It prefers bright light exposure but colour bleaches when in full sun; best with some protection from afternoon heat but not in constant deep shade.
Soil: Needs a neutral, well drained sandy soil spot, with deep soil, but will still thrive in less than ideal conditions. Mulch with organic materials (bark or leaf mould).
Moisture: Water when dry. Drought tolerant.
Fertilization. Because of its growth habit, fertilize only when terminal bud begins to swell, indicating the start of the annual growth cycle.
Hardiness: It should be protected from extreme cold. (USDA Zones 9-11) Sustains leaf damage at -2° C.
Salt aerosol tolerance: It is salt resistant and is even happy living out on seaside condominium balconies.
Maintenance: Minimal; removal of offsets if desired, removal of spent fronds
Use: Landscape as cultivated perennial in warm, coastal areas, it makes a great accent or specimen plant and can be used in beachside plantings. Several can be planted together for a lush, tropical effect. Plant on three to five-foot-centers to create a mass planting. Use near the patio, in mixed foundation plantings or in perennial beds. It is a spectacular house-plant or interior-scape specimen in cool areas tough enough to survive occasional neglect and harsh indoor environments. It is very well suited to bonsai culture.
Warning: All parts of the plant are poisonous to animals and humans. The toxicity causes liver and kidney failure, as well as eventual paralysis. Dehydration sets in very quickly. No treatment for the poisoning is currently known. Poisonous Parts: Fleshy seeds, leaves. Protect pets and instruct children to never eat or chew any plant material without permission.
Propagation: Seeds. The germination process is very slow and difficult to achieve in cultivation, after fertile seeds are collected, they usually need several months of storage before the inner embryo is ready to germinate. Therefore, it is best to clean the seeds of external fruit and set them aside before attempting to propagate the seeds. Seeds should be sown in shallow container, lightly covered with sand, and after germination, potted off in small pots of moderately rich, light soil. The growing plants do best in partial shade. The old plants frequently send up suckers around the base of the trunk. These may be taken off when in a dormant state and rooted, care being taken to remove the leaves to guard against excessive transpiration. The advantage of the "pups" is that you will know its sex, for seedlings you will have to wait several years until the plant flowers to find out.