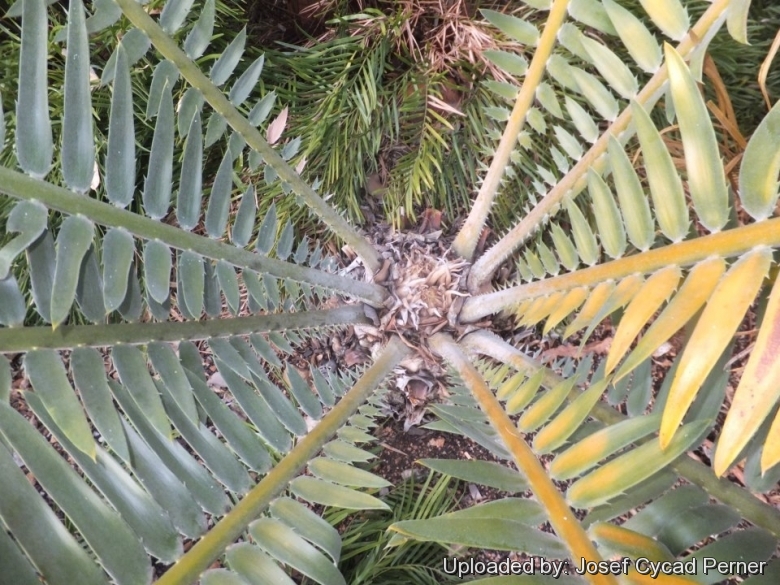 Origin and Habitat: Encephalartos septentrionalis (Nile Cycad) occurs in southern Sudan, northern Uganda, northern Democratic Republic of the Congo [previously Zaire], Mali and in the interior of the Central African Republic. Despite the fairly wide range, the population size is only estimated to be about 2,000 mature individuals.
Altitude range: This species is recorded from elevations ranging from 500 to 2,500 m asl.
Habitat and Ecology: Encephalartos septentrionalis grows in lowland and medium altitude rocky areas in sparse forests and in grassland and open bushland. The climate is hot and dry and the plants grow amongst granite boulders in full sun. Frequent fires in the area blackens the larger stems, but the trunk of this species is covered in old leaf bases that makes adult plants quite fire tolerant. The plant will immediately start to produce new fronds if the old ones are burned off or badly scorched. Sometimes the mature plants become deciduous for a time and rarely do they carry their leaves for a second season. Limited seedling regeneration takes place because of the hot dry conditions and the frequent grass fires. This species is relatively common in the area, and does not appear be endangered in any way and threats are not known, but agricultural activities, increased droughts and poaching by collectors are all potential threats.

Description: Encephalartos septentrionalis also known as the Nile Cycad is a medium sized cycad that grows to 2.4 metres of trunk height. It is the northernmost Encephalartos species and form clumps much less frequently than other African cycads, and is rare to find more than 3 stems in a clump. It has adapted to harsh growing conditions in habitat. In cultivation, this plant can develop a deep tap root, and may be semi-deciduous. The dead leaves hang down and form a skirt (if not removed).
Trunk: 30-200(-250) cm in height, branching at the base and 30-75 cm in diameter.
Leaves (fronds): The leaves are mid green narrow oblong, tapering gradually to the base1.5-2 m in length, rhachis distinctly grooved between the leaflets. Leaflets oblong to lanceolate, lore or less coriaceous, upper margin straight, lower upcurved to the forwardly directed spiny tip, margins with 2–7 spiny teeth often crowded to the base, basal attachment 5–9 mm. wide, lower surface striate with 26–43 parallel nerves. Lower leaflets ovate-lanceolate, spiny, passing to 3–2-furcate and simple spines, ceasing just above the swollen base.
Female cones: The mature female plant can produce up to 4 cone from centr. Yellow green becoming more brown as they mature, bulla of median scales deflexed, 4.5–5.0 cm wide, 2.0–2.7 cm deep, rhomboid, with the adaxial margin rounded, obscurely ridged, the sagittal crest of coarse, rounded warts, abaxial face receding, seminal ridges distinct, tuberculate dentate, terminal facet rhomboid to semi-elliptic, 14–17 mm wide, lateral lobes triangular to irregular, 3–6 mm long with lateral facets warty ridged and the angles tuberculate dentate.
Male cones: The male cones are of the same colour of female ones, narrow ellipsoid,cylindrical, or tapering in the upper half, can measure12–23 cm long, 3–4.5(-11) cm diameter, peduncle 10–15 cm long, 5–12 mm diameter. Median scales horizontal, triangular, 12–22 mm long, bulla deflexed, 15–25 mm. wide, 6–10 mm deep, rhomboid to plano-convex, puberulent, terminal facet lenticular to compressed-rhomboid, 1/3–2/3 as wide as the bulla. Up to fifteen male cones per mature plant are borne at the apex.

Subspecies, varieties, forms and cultivars of plants belonging to the Encephalartos septentrionalis group 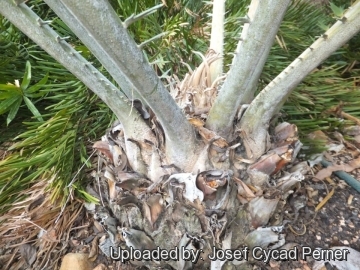 Encephalartos septentrionalis Photo by: Josef Cycad Perner
Send a photo of this plant.

Cultivation and Propagation: Encephalartos septentrionalis is an adaptable plant well suited to warm temperate and subtropical climates, butcan handle light frosts. Its beauty and ease of horticulture make it one of the finest cycads for use in the garden. As a garden plant, this cycad will usually hold one or two crowns of leaves, all in good condition.As a seedling, it often loses its previous year's leaves before the new leaves emerge. The seedlings need plenty of room for the tap root to develop and require very good drainage. It can be grown in full sun without its leaves burning.
Growth rate: It is a long lived slow growing plant taking 15 to 20 years for one of these to produce a cone, so patience is a must.
Soils: It prefer well drained, gritty soil.
Waterings: In cultivation prefers plenty of water, especially in dry weather for optimal growth. But it is eventually drought resistant. Keep rather dry in winter.
Fertilization: Naturally undemanding for nutrients, it responds very well to regular applications of fertilizer. Growth can be greatly improved through the application of fertilizers. Most growers find that a fertilizer having an even NPK (Nitrogen, Phosphorus, Potassium) balance, and supplemental trace elements, provides a good start for cycads.
Exposure: It will grow in partial shade, however best results are obtained growing the seedlings in full sun.
Hardiness: They do best in a tropical or sub-tropical climate and should be kept totally dry in winter at or around 10°C but demonstrate a remarkable degree of cold resistance and may tolerate light frost for short periods if dry, however heavy frosts would probably be fatal.
Propagation: It may be propagated by seeds. They are among the easiest plants to germinate.