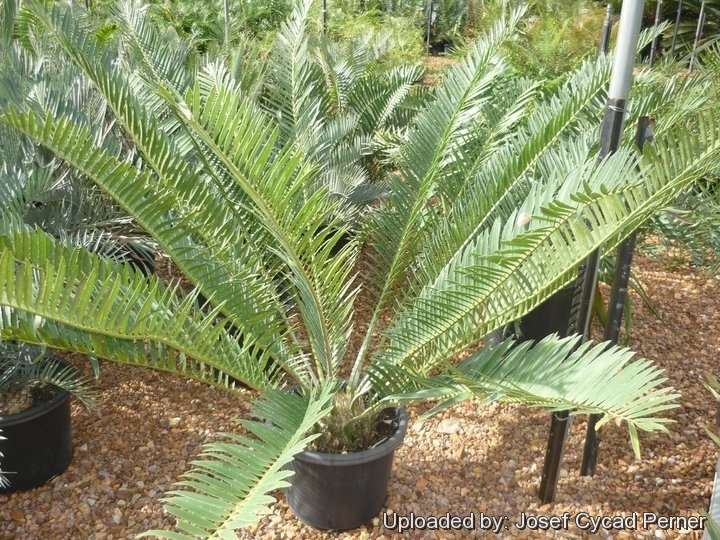 Origin and Habitat: Encephalartos pterogonus was known from one small population located on the huge granite outcrop called Mount Mruwere (Monte Urueri) in the Manica province in central Mozambique (extent of occurrence is 35 km² and area of occupancy is less than 10 km²) and possibly from other adjacent hills. Most of the plants have been plundered by wealthy collectors and the species was declared extinct in its habitat by 1975, but some reports refer that there are at least 246 mature plants, 112 smaller plants and 300-400 seedlings that survived out of the initial 1,000 seedlings that were re-introduced. Another population on a nearby inselberg may also belong to E. pterogonus. The colony was never large.
Altitude range: 700 up to 1,000 metres above sea level.
Habitat and Ecology: This species grows on mountains with granite outcrops and plants are found in or near forested areas. This species has been severely affected by over-collecting for ornamental purposes. The small range and low numbers of this species means it could be affected by reproductive failure.

Description: The “Winged Cycad” (Encephalartos pterogonus) is a medium size plant that may have 3-4 stout trunks rarely exceeding 1.5 m in height with some basal suckers and numerous woolly bracts at the apex. Leaves are attractive light green, highly glossy, with leaflets which are quite prominently teethed, fairly regularly overlapping and arranged in closed or nearly closed venetian-blind formation, and slightly pointed upwards in an open V-disposition.
Derivation of specific name: It derives its name from the Latin "pteron", meaning "wing", and "gonas", seed, from the unusual winglike structures or lobes which protrude from the lower edges of its pollen cone scales (microsporophylls) on male plants in habitat.
Stem: Robust, up to 1.5 m in height (rarely 2.1 metres) and 40cm in diameter
Leaves: The leaves are about 1-1.5m in length, shiny mid-green, flat (not keeled) in section with opposing leaflets inserted at 180°, arranged at an obtuse angle (45-80°) on the leaf, with basal leaflets reducing to spines and closely resemble the foliage of Encephalartos manikensis. Its leaflets are lanceolate, weakly discolorous, not lobed. Median leaflets 15-18 cm long, 20-25 mm wide. Rachis green, straight, stiff, not spirally twisted. A distinguishing characteristic of the leaflets of E. pterogonus is 1-3 prominent spines on the upper margin of most leaflets close to the base, the lower margin is also lightly toothed (1-3 teeth). Mature plants also tend to have wider leaflets than E. manikensis, and their leaflets often overlap and are directed upward from the rhachis towards apex in V position. Petioles short, straight, with 1-6 prickles.
Cones: Both the male and female cones are green and superficially resemble the cones of the Encephalartos manikensis form found in Zimbabwe. Male cones 2-3, narrowly ovoid, green, 30-38 cm long, 9-11 cm in diameter. Female cones 2-3, ovoid, green, 30-40 cm long, 16-18 cm in diameter.
Seeds: Oblong, 30-35 mm long, 20-23 mm wide, sarcotesta red or orange.
Taxonomy note: Encephalartos pterogonus is very rare. It was discovered in 1949, described in 1969 by South African botanists R. Allen Dyer and Inez Verdoon, who separated the previously broadly defined Encephalartos manikensis into a number of segregates, primarily on differences in pollen cone morphology (see also Encephalartos concinnus, Encephalartos munchii and Encephalartos chimanimaniensis). Characterised within the group by unique wings or lobes on the lower edges of the pollen cone scales that project beyond the terminal facets.

Cultivation and Propagation: As a garden subject, Encephalartos pterogonus is a spectacular cycad species. This cycad is a vigorous grower and does best in deep well drained sandy loam in full sun. It responds to regular watering and fertilization. It dislikes frost. It is very difficult to get to cone. Tends to sucker well and is very adaptable in cultivation. The seedlings grow rapidly, developing into an attractive garden plant with 1 m long leaves in four to five years. It is an adaptable plant well suited to subtropical climates. It can be grown in full sun without its leaves burning. When young they can be grown as a container plant and eventually transplanted into the garden. As a garden plant, this cycad will usually hold two or three crowns of leaves, all in good condition.
Growing rate: In cultivation this cycad is very easy to grow and grows quickly. Seedlings can be a little slow to get started for the first couple of years if they are grown in containers which do not allow room for the tap root to develop.
Soils: It grows in all sorts of soil type, but prefer well drained, gritty soil with plenty of water, especially in dry weather.
Transplanting: This species transplants easily as a mature plant, although it is recommended to remove all of the leaves before doing so. This makes for easier handling and the plant will recover sooner due to less moisture loss.
Exposure: It thrives and grows best in full sun or partial shade. When grown in full sun, the leaves are a little shorter and less likely to be damaged by wind. The leaves of those plants grown in the shade can become stretched out and damage the caudex if they break off close to their base.
Waterings: In cultivation prefers moist soil with good drainage for optimal growth. But it is eventually drought resistant. Irrigation systems can be detrimental to cycads, damaging the leaves and stems from the pressure of the water as well as over-watering.
Fertilization: Naturally undemanding for nutrients, it responds very well to regular applications of fertilizer. Growth can be greatly improved through the application of fertilizers. Most growers find that a fertilizer having an even NPK (Nitrogen, Phosphorus, Potassium) balance, and supplemental trace elements, provides a good start for cycads.
Wind tolerance: It prefers a sheltered position providing protection from the prevailing winds.
Hardiness: Frost sensitive (USDA zones 10-12) . It is well represented in botanical gardens and private collections worldwide where the tropical cycads can be grown. However it exhibits an unusual amount of cold tolerance by surviving in warm temperate areas as well, only suffering defoliation or leaf burn during extreme winters.
Propagation: It may be propagated by seeds. They are among the easiest plants to germinate, but appears to need shade for successful germination.