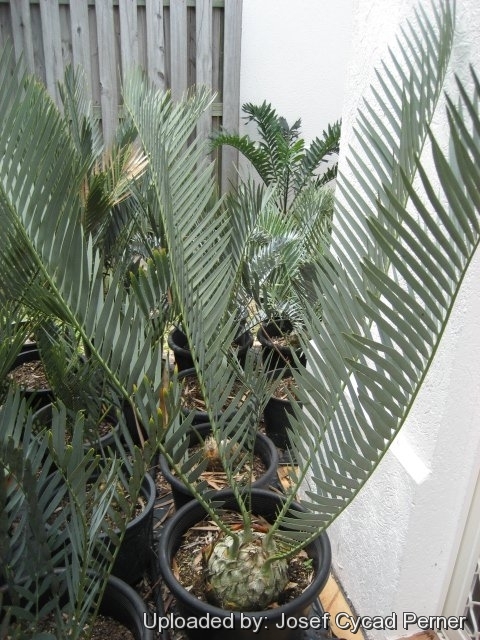 Origin and Habitat: Encephalartos middelburgensis is confined in the upper catchment area of the Olifants River,Witbank and Middelburg districts, which include the Wilge and Klein Olifants Rivers, in the provinces of Gauteng and Mpumalanga of South Africa (formerly Northern Transvaal). Estimated area of occupancy km2 20. The population is small and thought to number only 120 mature individuals occurring in the wild.
Altitude range: 1,100 to 1,400 metres above sea level.
Habitat and Ecology: This species occurs in open grassland and on steep rocky slopes in sheltered valleys on slightly acidic soils in full sunlight. The climate in the area is hot in summer and cold in winter, and the plants probably experiences winter frost. The rainfall in its distribution area is around 600 mm per annum and occurs predominantly in summer. At type locality it occurs close to Encephalarthos lanatus. Encephalartos species are pollinated by insects and wind in the wild. The fleshy outer covering layer of the seeds is desirable food to a range of animals such as monkeys, birds, rodents and bats. Therefore, with any luck, the seeds are discarded some distance away from the parent plant in a hospitable environment in which they are likely to germinate. E. middelburgensis has declined continuously over at least the past 40 years and populations are still declining due to illegal collector pressure. Subpopulations have continued to decline due to collecting and some subpopulations are also impacted by disease. The development of semi-intensive agricultural must have had a tremendous effect on the stability of the taxon, especially with the increased burning of the habitat and grazing practices. The taxon is extremely vulnerable to fire and not stimulated as is the case with Encephalartos lanatus. Generation Length 70 years. Surveys of seed set and pollinator abundance also indicate that several subpopulations are not producing viable seed. Overall population reduction in the past three generations (90 years) exceeds 80%, and is therefore facing an extremely high risk of extinction in the wild.

Description: Encephalartos middelburgensis is a tall and robust cycad with stems upright to about 6 metres, or occasionally procumbent (lying along the ground) when long, growing in clumps of up to twelve stems and producing suckers freely from the base. The fronds are bluish-green and covered with persistent powdery bloom. It is distinguished within the group of blue-leaved species of northern South Africa by its long, straight leaves with terminal part curving very slightly upwards, with entire leaflets and reddish brown cones with fine brown hairs. Encephalartos middelburgensis is among the rarest of the blue cycads from South Africa.
Derivation of the specific name: The epithet refers to Middelburg District in which the species mainly occurs.
Stem (trunks): Single stems 3-7 m tall, usually unbranched above, but branching and suckering from the base, usually with 3-6 stems (occasionally up to 12), each 200-450 mm wide. A female plant on the farm Bankfontein, standing along the Cycad Hiking Trail, was declared a national monument in 1994. It consists of five stems, the tallest being 7,8 m high, still standing upright. Two stems branch to form three crowns each , resulting in the stems being procumbent on account of the weight of the plant a feature that is characteristic of quite a few cycads. The age of the Bankfontein cycad has been estimated at 500 years.
Leaves (fronds): Straight, stiff, held upwards, 1-1.8 m long, with the apex tending to curve very slightly upwards. Leaflets directed towards apex of frond at angle of 45° and tendig to shield one another down-wards but only at the leaf apex. Central leaflets very narrowly elliptic, very slightly S-shaped and falcate, tapering to both ends, 16-23 cm long, 11-19 mm wide, usually entire, with apices oblique and pungent. Leaflets leathery and without nodules, bluish-grey with a powdery bloom and with the same colour on both upper and lower side, young leaves are often silvery due to a dense covering of powdery bloom. Margin unarmed or (rarely) with 1-2 spines in young plants, the margin of the lower leaflets tends to curve upwards while that of the upper ones tends to curve downwards. Lower leaflets reduced usually to one or two spines. The petiole (leaf stalk) is triangular and 100–200 mm long.
Cataphylls (scale leaves): The cataphylls (Modified leaf, much reduced and thickened, serving to protect the apical meristem in cycads produced in flushes preceding the emergence of cones or leaves.) are inconspicuous, long and slender.
Male cones: 3-5(-8) per season per stem, borne on a 50–17 cm long stalk, each (18-)40-70 cm long, (60-)85-130 mm in diameter, peduncled, green with short-reddish brown indumentum (hairs), but coarser than female cones.
Female cones: 4-5(-8) per season per stem, reddish brown with brown hairs, (30-)35-45(-50) long, 16-20 cm in diameter, borne on a 50–20 cm long peduncle which is usually obscured largely by the cataphylls of the stem. Cones of Encephalartos middelburgensis do not disintegrate spontaneously as those of the other encephalartos do, but dry out during September–October to yield 170–260 detached seeds.
Seeds: Yellow to light brown, 38–40 mm long and a 22–24 mm in diameter.
Related species: Encephalartos middelburgensis resembles Encephalartos graniticolus Vorster et al., Encephalartos eugene-rnaraisii Verdoorn, Encephalartos verrucosus Vorster et al., Encephalartos lehmannii Lehm., Encephalartos princeps R.A. Dyer, and to some extent Encephalartos cupidus R.A. Dyer by its stiff, pungent, glaucous fronds: but differs from them all by its combination of well-developed petioles and proximal leaflets reduced in size to entire prickles towards base of frond. Anatomically it shows an affinity to Encephalartos graniticolus, Encephalartos eugene-maraisii, and Encephalartos cupidus on account of its leaflets. 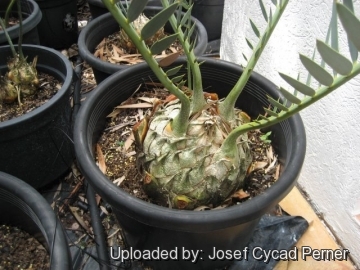 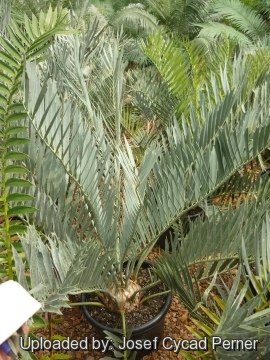 Cultivation and Propagation: Encephalartos middelburgensis is an adaptable plant well suited to warm temperate and subtropical climates, and can handle light frosts. With its bright foliage heightened by full sun is a commanding accent plant in the general landscape and makes an excellent tubbed specimen. It can be grown in full sun without its leaves burning. Its colour makes it a good subject for the nightscape. Its beauty and ease of horticulture make it one of the finest cycads for use in the garden. It is partially drought tolerant, salt tolerant, and completely wind tolerant. As a garden plant, this cycad will usually hold one or two crowns of leaves, all in good condition. As a seedling, it often loses its previous year's leaves before the new leaves emerge. The seedlings need plenty of room for the tap root to develop and require very good drainage.
Growth rate: It is a long lived slow growing plant taking 15 to 20 years for one of these to produce a cone, so patience is a must.
Soils: It responds well to deep, fertile, slightly acidic, well drained, soil enriched with compost.
Waterings: In cultivation prefers plenty of water, especially in dry weather for optimal growth. But it is eventually drought resistant.
Fertilization: Naturally undemanding for nutrients, it responds very well to regular applications of fertilizer. Growth can be greatly improved through the application of fertilizers. Most growers find that a fertilizer having an even NPK (Nitrogen, Phosphorus, Potassium) balance, and supplemental trace elements, provides a good start for cycads.
Exposure: It will grow in partial shade, however best results are obtained growing the seedlings in full sun.
Warning: Seeds are poisonous.
Hardiness: They do best in a tropical or sub-tropical climate and should be kept totally dry in winter at or around 10°C but demonstrate a remarkable degree of cold resistance and may tolerate light frost for short periods if dry, however heavy frosts would probably be fatal.
Propagation: It is easily propagated from seeds and suckers (the young plants that grow around the main stem). Seedlings at the one-leaf stage are susceptible to the fungal disease “damping off” which kills the seedling's single leaf at ground level.