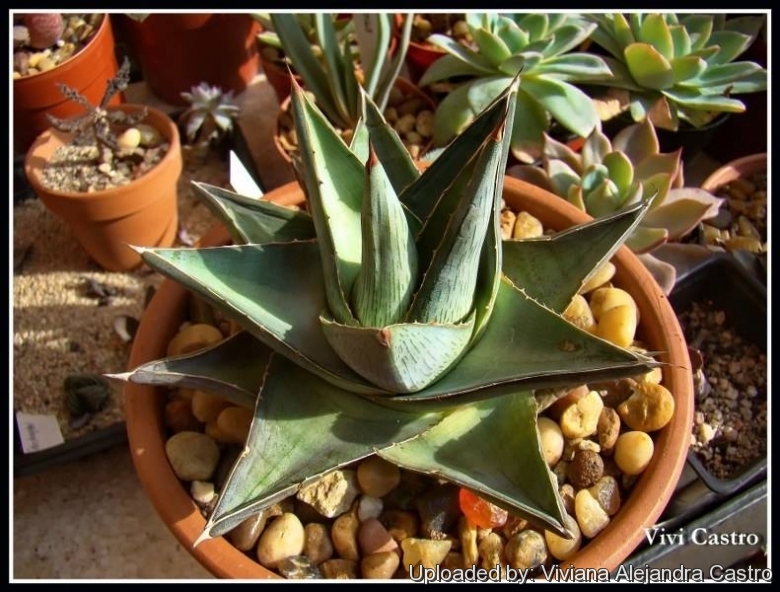 Origin and Habitat: This is a dwarf species is of unknown origin. It first came into the market under the trade name of Agave pumila, and there are no registered type locality, and no observed inflorescence (at the time of publishing) it was told that a collector of such plants seen it in the Andes of Colombia. Baker reported the Kew plant was obtained from the Dutch plant trader De Smet in 1879, who probably received it from Mexico. It could be a natural hybrid between Agave lechuguilla and Agave victoriae-regina from the area at east of Saltillo, Coahuila. "Yes, we have about 2 dozen or so plants of A. pumila in the ground and they are all growing out of the dwarf, juvenile form. I agree with your hypothesis that it is ... a hybrid of lechuguilla, possibly from the north edge of Laguna de la Viesca where we collected the compact or dwarfish form of Agave victoriae-regime (together with lechuguilla)" (Glass, letter, Jan. 23, 1979).

Description: Agave pumila is a beautiful very compact and small Agave (a.k.a. Dwarf Century Plant or Miniature Agave) with short fat leaves with dark striation. The species is described as highly dimorphic, with a compact surculose (producing suckers) juvenile form, before making an open rosette and a non suckering mature form, a seemingly contradictory situation. The juvenile form also known as "forma nana" (dwarf form) somewhat resembles a stubby-leaved Agave titanota, and according to the material, that form will persist under pot culture for up to 8-12 years. Agave pumila has long been known only in juvenile form as a pot cultivate plant, however plant planted into roomier garden soil greatly change form tending to look more like Agave lechuguilla. This well-marked dimorphism is not seen equalled in other agaves, so it has been suggested that A. pumila could be a hybrid from Agave victoria-reginae and Agave lechuguilla. The narrow detachable margin with weak teeth and the check-marked striping on the under side of young leaves indicate relation to Agave lechuguilla, but must be another cross breed. More certain relationship could appear with its eventual flowering.
Juvenile form: The juvenile form has small rosettes less than (3-)5-8 cm wide and 2-3 cm high, laterally branched at the base, 5-8-leaved. Leaves very thick, ovate-triangular to ovate-orbicular, erect spreading, broader than long, 2-4 long and 3-4 cm wide, upper side hollow, very convex on the back, somewhat keeled, blunt, suddenly contracted, the base broadly clasping, thickly succulent, lined beneath with dark green on a lighter background, the margin thin, white, friable with several weak small teeth. Terminal spine small, sharp, conical, flexuous decurrent on the margin in a dried line of the same texture as the little marginal prickles.
Mature form: After a variable period (usually 8-10 years depending on growing conditions) the the plant change look, and produces short, thick-stemmed, non suckering, open rosette, usually as small as less than 12-18 cm tall and wide as a container grown specimens, however if planted out, in appropriate climes it may get somewhat larger 40-50 cm tall, 60-70 cm wide.
Leaves: 30-38 cm long, 4-4.5 cm wide, deltoid-lanceolate, rigid, patulous, thickened at base, concavo-convex, grayish green, without check marks below; margin narrowly white corneous, detaching, with small weak teeth 1-2 mm long, 1-1.5 cm apart. Terminal spine 1.5 cm long, slender conical, slightly grooved above, decurrent along leaf edges and the keel decurrent in median.
Inflorescence: Unknown. 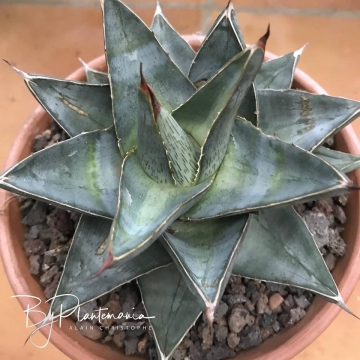 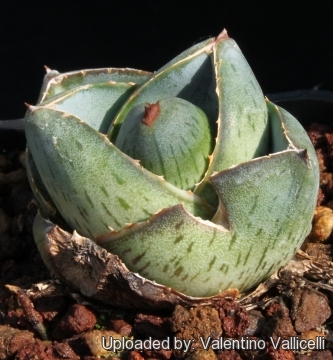 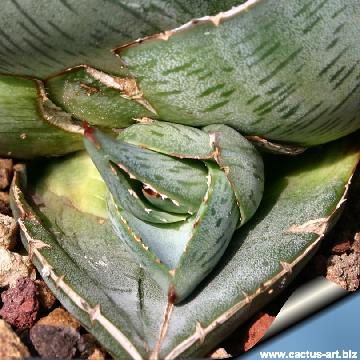 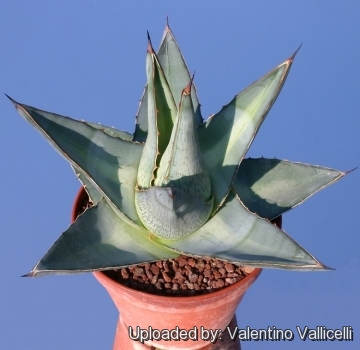 8 years old. The leaves are turning to the adult shape. Photo by: Valentino Vallicelli 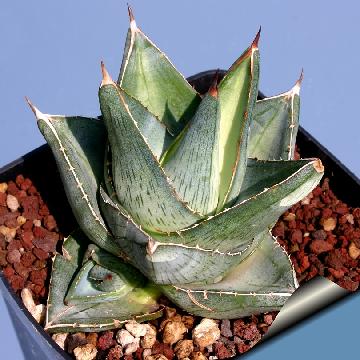 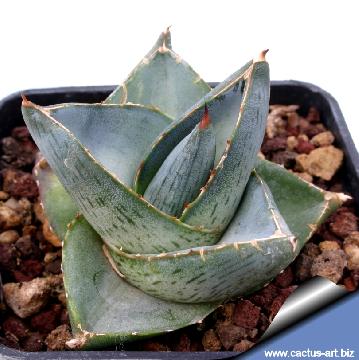 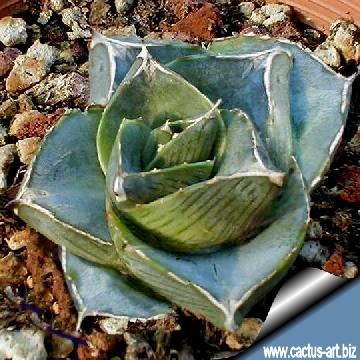 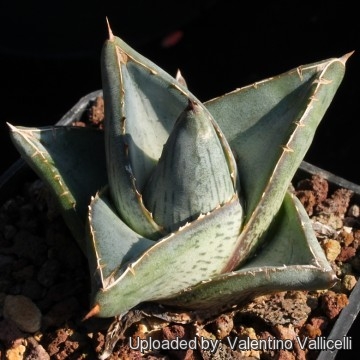 Cultivation and Propagation: The most famous miniature agave Agave pumila, still referred to as the smallest of all agaves by most authors, is a relatively easy-to-grow species but very slow growing. Like many other agaves, this produces offsets freely and is now rather extensively cultivated. This plant is most often sold as a collector curiosity in its juvenile form as a potted specimen but it is also an attractive agave as it matures and should be tried in the ground in Mediterranean-climates where it thrives in full sun in well-drained soils with little irrigation and is hardy to around – 5° C.
Soil: Need a very well-drained, soil.
Waterings: It must be provided with copious water in summer but allows to dry thoroughly before watering again. During the winter months, one should only water enough to keep the leaves from shrivelling. But heavy watering results in some leaf cracking.
Exposure: Suited for light shade to full sun, but better with some shade in summer.
Hardiness: It is best to avoid freezing temperatures.
Propagation: Exclusively by suckers (if available) which are found growing around the base of the plant. The growth and multiplication is very slow. Remove the basal suckers in spring or summer and let the cuttings dry for a few days before inserting in compost. It can be also vegetatively propagated by taking an adult plant and cutting longitudinally in quarters, preserving as many of the roots in each piece.