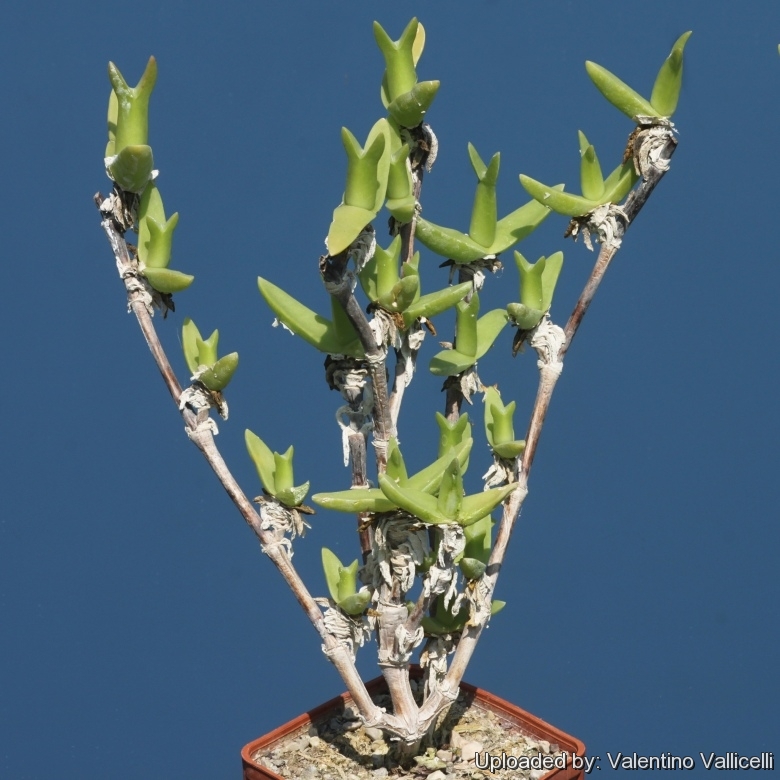 Origin and Habitat: Northern Cape, South Africa.
Altitude: 350-1200 metres above sea level.
Habit: It grows in quartz protected by a tangle of rocks and other succulent shrubs. These included meter-high specimens of Othonna arbuscula. In its local habitat, from May to August, when plants grow, the weather is cold, and temperatures sometimes dip below 0ºC.

Description: Mitrophyllum dissitum is a persistent and large succulent mesemb that develops into a well-branched subshrub 30-60 cm tall.
Stem: Vertical with long visible internodes. The nodes are often covered by dry leaf-remains.
Leaves: Pale grey to green. Summer leaves cylindric to conical connate 15-45 mm long, width 10 mm similar to and continuous with the stem or slightly thicker than the latter at their base. Winter leaves subcylindrical free approx 25 mm long, width 6 mm.
Flowers: Solitary and terminal (diameter: 30 mm). Anthers whitish. distinguished by the bracts on the flowering branch, these are sharply pointed and less than 15 mm long.
Blooming season: Late winter. This species flowers when young and is one the best species for horticulture. The plants are long-flowering and the flowers scented.

Notes: Mitrophyllums have a concentrated period of growth, from mid-autumn to mid-winter, and they will flower during this period as well. Mitrophyllums produce two very different leaf-pairs types per season: the "active season pair", only basally connate and free for most of their length, with the upper surface more or less flat, and the "resting season pair", mitre-like (inverted cone shaped), connate for most of heir length with only the tips free, this two types of leaves alternate and are replaced annually. The new leaves develop inside the old coalescent leaf pair. The old leaves redden and dry with proceeding growth of the young leaves until the old ones are reduced to a thin sheet of dry matter that protects next season's growth during the summer resting phase. Leaf growth ceases at this stage. 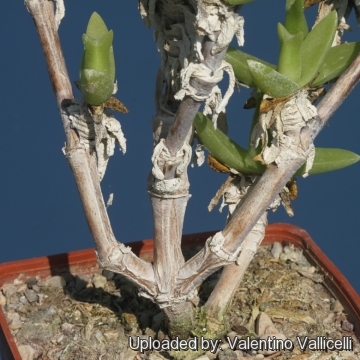 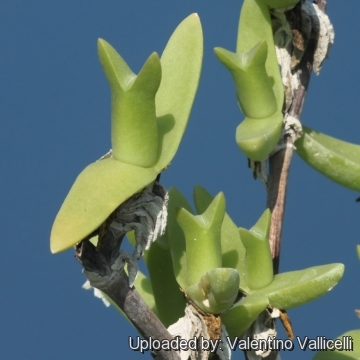 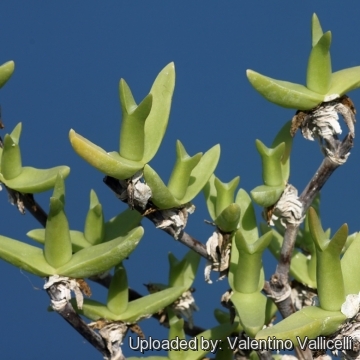 Mitrophyllum dissitum Photo by: Valentino Vallicelli
Send a photo of this plant.

Cultivation and Propagation: Mitrophyllum dissitum are relatively difficult to grow and take many years to mature, but less tricky than most. In cultivation the plants tend to be fall and winter active and head for summer dormancy. The growing season in northern hemisphere is from September to March, but the active growth is concentrated in a short period in early autumn.
Soil: They prefer sandy, mineral-rich soil and require a very good drainage and protection from excessive water.
Fertilizer: Be careful not to apply too much fertilizer.
Water: Water minimally in summer. Water regularly in winter after the new long green leaves appears at their extremities in autumn after the summer resting period, or alternatively (as for other difficult species) do not to water the plants themselves, but sink the pots in gravel which is kept moist.
Exposure: They enjoy some shade (avoid direct summer sun as they grow wild among rocks and under the shade of other plants) and in summer they need to be kept in a cool area.
Hardiness: Hardy to -2°C (or less).
Maintenance: Avoid to repot frequently. This plant may stay in the same pot for many years. Plants grown in larger containers have frequently relatively poor flowers. It might improve when the plants are given their own, small individual pots. Ensure a very good ventilation.
Propagation: They can be reproduced by seed and can be also propagated by cuttings with comparative ease. Take the cutting from a grown-up mother plant. Each cutting must contain one or more branches along with a fraction of root.