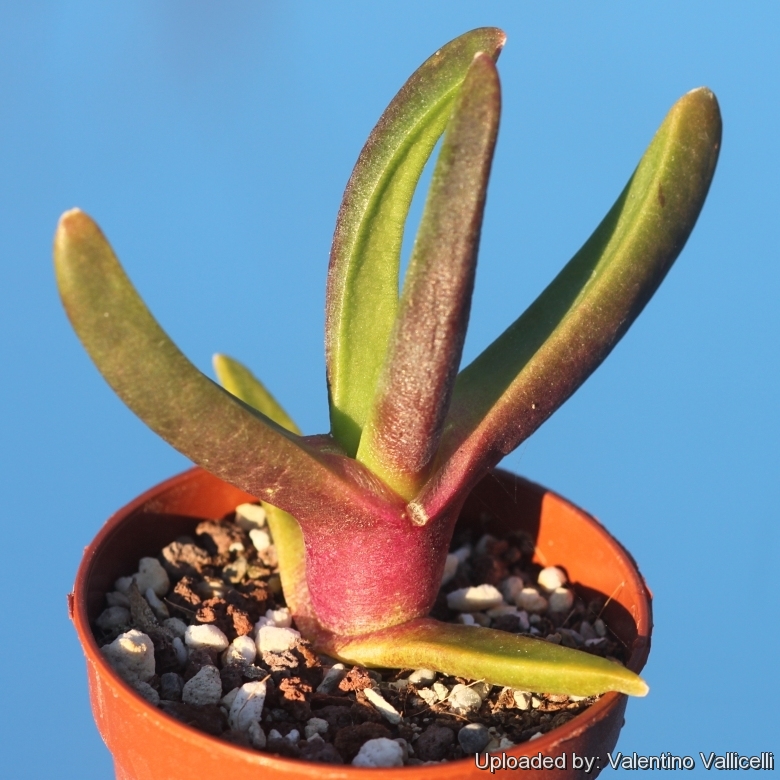 Origin and Habitat: Cape-Province: Calitzdorp, Oudtshoorn Distr., near theGamka River. South-Africa. Extent of occurrence 20 km², Area of occurrence less than 20 km².
Habitat and Ecology: Succulent Karoo. Glottiphyllum regium grows under particularly dry conditions in the winter rainfall area (<200 mm annua] rainfall) scattered in loamy, alkaline soil among quartzitic sandstone rocks or in sandy loam on some of the lower mountain slopes in the eastern Little Karoo, often in dominating monotypic stands. The accompainig vegetation also comprises Aloe striata. Mainly bees pollinate the flowers during the day. In the evening the pollinators are most likely to be moth species. This species is threatened by habitat loss and habitat degradation, the habitat quality at five known locations is declining due to grazing, trampling and soil erosion from ostrich farming. The population trend is decreasing.

Description: The curious "tongue-leaved mesemb" botanically known as Glottiphyllum regium is a nearly stemless, clump-forming, perennial succulent that grows to about 13 cm high with a spread of 15 or more cm and may live as long as 30 years in its natural habitat. The compact mats of Glottiphyllum regium are more robust than in all other species in the genus. The leaves, which usually point upwards, are triangular in cross-section and grey-green in colour. This autumn-flowering species has bright yellow flowers, which are borne on long stalks. The capsules remain on the plant after flowering. G. regium is the largest and possibly the most attractive of all the glottiphyllums.
Derivation of specific name: The specific epithet regium means of kings.
Stems: Branches are short, upright, later decumbent, each with 1-2 pairs of leaves. Longer branches are coated by remains of old leaves.
Roots: Semi-fibrous, shallow typical of succulents.
Leaves: They come upright, paired end decussate in youth, the larger blade of a pair 2.5-13 cm long, 10-15 mm wide and thick, almost equal, oblong and tongue-shaped, trigonous to terete, wax cover inconspicuous, bright green to grey-green occasionally with red and purple. The biggest leaves of the genus are found in this species.
Inflorescence: staked
Flowers: Iridescent yellow up to 35 mm in diameter
Blooming season: This species produces masses of showy, large, yellow flowers from mid-winter until early summer (from June to late December), its peak flowering time being September. The flowers tend to open fully from 11:00 am as do many other Aizoaceae species as they need sufficient sunlight and warmth.
Fruit (capsules): Fruit stalks more than 30 mm long, tops raised, rims very high, base an elongate cone tapering into the stalk, spongy, valve wings or awns absent, locules 8(-10). Capsules are hygrochastic, a mechanism whereby seeds are dispersed by raindrops. When it rains, the keels of the wet seed capsules push open valves. Raindrops hitting the open seed capsule splatter seeds in different directions, thus ensuring recruitment and the subsequent survival of the species.
Seeds: 1.5 mm long, 1.1 mm broad.

Cultivation and Propagation: The plants in this genus represent some of the more easily cultivated succulent species, but sadly neglected by growers in recent years. Their main growth period is in late winter and were heading for spring-summer dormancy, but they do best with at least a little water all year.
Soil: It grows best in sandy-gritty soil and requires good drainage as it it is prone to root rot. It can grows outdoor in sunny, dry, rock crevices (protection against winter wet is required) It can also be cultivated in alpine house, in poor, drained soil.
Fertilization: Feed it once during the growing season with a fertilizer specifically formulated for cactus and succulents (poor in nitrogen), including all micro nutrients and trace elements diluted to ½ the strength recommended on the label.
Watering: Requires little water otherwise their epidermis breaks (resulting in unsightly scars). Water moderately from the middle of summer to the end of winter, and keep the compost almost dry when the plants are dormant (only occasional misting). Water minimally in spring and summer, only when the plant starts shrivelling (, but they will generally grow even in summer if given water). If grown in a container, bottom watering by immersing the container is recommended. It must have very dry atmosphere.
Exposition: Keep cool and shaded in summer, but provide maximum light the rest of the year. Remember that a sunny locality is best, otherwise they will not flower properly.
Hardiness: It prefer a very bright situation and require a minimum temperature 5°C (But will take a light frost and is hardy down to -7° C for short periods if it is in dry soil). USDA zones 9A – 11. In areas prone to frost, grow in an intermediate greenhouse or conservatory, in pots.
Pests and diseases: Soft leaves mean easy to damage. May be susceptible to mealybugs and rarely scale.
Uses: Container, rock garden.
Remarks: However there are two ways to grow glottiphyllums: The first is to let nature take her course, which means giving them large pots and copious water; they will burgeon into enormous masses of glistening green leaves. The other is to starve them into svelteness by hot summer droughts, small pots, and firm loam. The results can be very attractive. In any case it is best to treat them as late winter growers.
Notes: The 50 or so species of this South African genus of succulents are so similar that many may be hybrids.
Propagation: Seeds or cuttings. Seeds germinate very easily and can be sown in early to mid-spring, but can be sown at most times of the year (Avoid very hot weather in summer) and germinated in heated humid environment. Do not sow the seeds too deep. If sown too deep, they will be smothered and probably not germinate. Under ideal conditions, seedlings will grow rapidly. Plant the seedlings out when they are 3–5 cm in height.
Alternatively, use stem cuttings taken towards the end of summer in an heated propagating case (15-21°C) Cuttings root easily and remain true to the species, while seeds tend to hybridize.