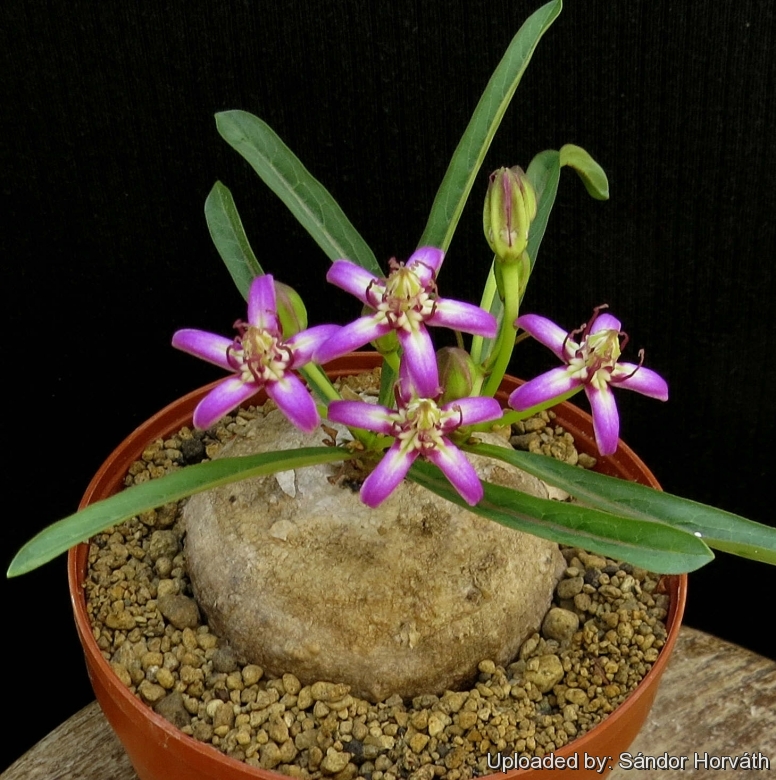 Description: Raphionacme splendens subs. bingeri is a caudiciform asclepiad with zig-zag shaped herbaceous annual stems up to 20 cm tall, growing from a sub-spherical tuber, up to 25 cm in diameter. This subspecies species is remarkable for its very few broader leaves ranging from ovate to elliptic, and conspicuously smaller purple flowers. It is an exceptionally beautiful species. Raphionacme splendens subs. bingeri is a geographical form of Raphionacme splendens distributed on the western part of the range, but not sufficiently differentiated from the standard R. splendens to be considered a good species in its own. R. splendens is one of the most widespread and morphologically variable taxon of the genus. Many of its geographical variant was early classified as different independent species, but nowadays all this plant are considered part of a multiform species, where each form is linked to others by populations of plants with intermediate characteristics. Venter (2009) regards Raphionacme bingeri morphologically as sufficiently unique to be given subspecies status.
Derivation of specific name: “splendens” Lat., “splendid”, for the bright flower colour.
Root tuber: Flattened turnip-shaped, 5-5 cm tall, 2-25 cm wide with white flesh exuding latex when cut.
Annual stems: Erect, zigzag-shaped, 15 - 20 (-30) cm tall, 2 -3 mm in diameter, unbranched, terete, young minutely pubescent.
Leaves: Distant, the two or three lower pairs reduced to mere rudiments or scales, the upper ones erect, elliptic-elongate or obovate, about 5 cm long and up to 4 cm wide, almost glabrous or variably short-hairy.
Inflorescence: Terminal or subterminal lax cymes, extra-axillary, shortly pedunculate, few-flowered with 2-4 flowers. Pedicels 7-25 mm long, slightly pubescent.
Flowers: Sepals ovate, 2-3 mm long, 1.5-2 mm wide, acute, outside pubescent to hispid; Corolla campanulate 20-50 mm across. Corolla tube 1.5-5 mm long. Corolla-lobes, completely spreading, oblong, 10-25 mm long, 6 - 7 mm wide, obtuse, white, rose to purple adaxially, outside scattered weakly pubescent, inside glabrous. Corona lobes erect, filiform from a broadened base with 2-keeled inside, 5-25 mm long, far overtopping the gymnostegium, apically often incised and contorted. Stamens 5 mm long, conical attached at the inner apices of the conspicuous coronal feet. Anthers linear 6 mm long, linear, glabrous, connivent over the tapering angular apex of the style, and connate at their tips. Gymnostegium completely protruding from the corolla- tube. Translator spatulate, about 3.5 mm, with a deeply bifid lanceolate blade.
Fruits (follicles): Erect, linearly fusiform, 8-10 cm long 4-5 mm in diameter.
Phenology: The plants comes into vegetation in May and blooms in June-July.
Note: The West African "Raphionacme daronii" is a smaller-flowered variant of this extremely widespread complex characterized by the long-stipitate stylar head, which surpasses the corolla considerably.

Subspecies, varieties, forms and cultivars of plants belonging to the Raphionacme splendens group 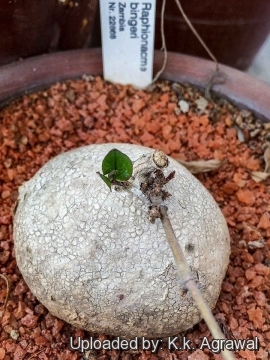 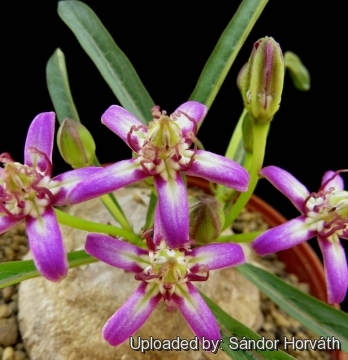 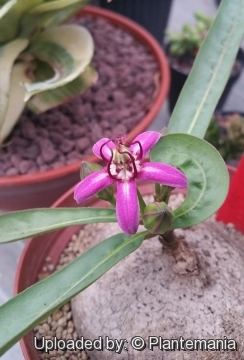 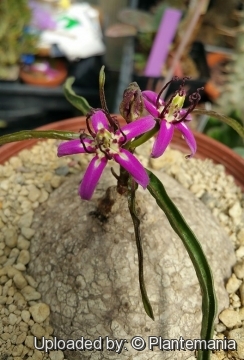 Cultivation and Propagation: In cultivation the plants are usually grown in semi shade, with the tubers wholly or (preferably) partially exposed to prevent scorching and rotting of the roots. This plant can take a good deal of water during active growth and should be watered only when not dormant. Keep dryish in winter. It should be overwintered in the greenhouse at temperatures over 12°C (avoid letting temperatures drop lower than 5° C). Use a very draining but rich soil. An error in cultivation may produce unsightly holes in the tuber.
Food uses: This species has a large edible tuber. The flesh consists largely of carbohydrate matter, and is refreshing rather than nutritious. The tuber exuding latex when cut tastes slightly bitter, and is eaten fresh (raw) or boiled, after having removed the milky and resinous peel. Europeans have used it boiled in water as a substitute for turnips. In West Africa the tuber and fruits are mainly eaten as a famine food. The tuber of this species has been occasionally confounded with the similar tuber of Euphorbia baga which is very toxic.
Medical uses: A leaf decoction is used as eye drops to treat conjunctivitis. In Congo the sap from the tuber is applied to scarification of the temples to treat headache.
Reproduction: This species can be reproduced by seeds.