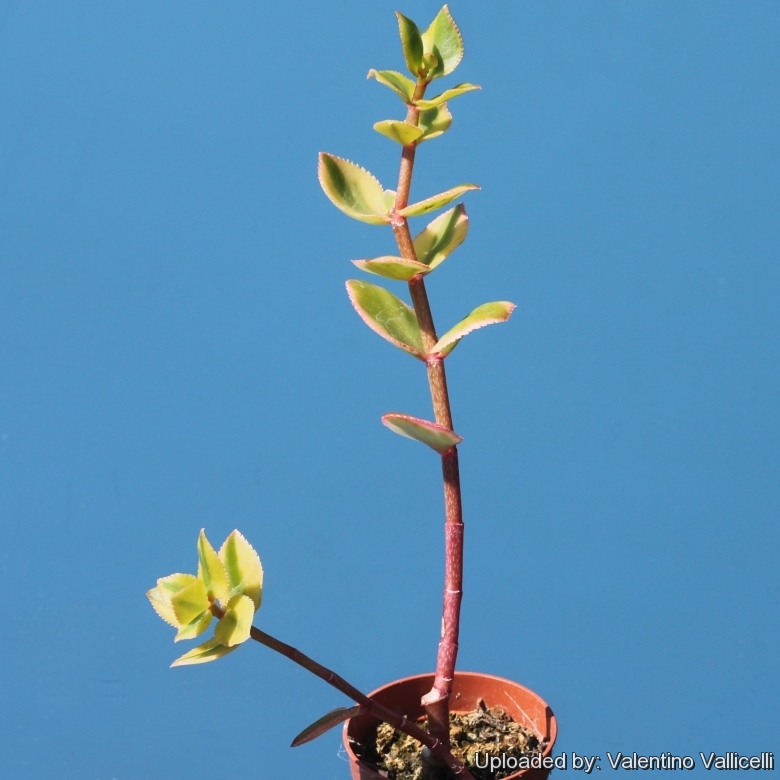 Origin and Habitat: Garden origin. the natural species comes from the coastal area of central KwaZulu-Natal, and separately near Knysna where it may be a garden escape.

Description: Crassula sarmentosa cv. Comet, named by Gordon Rowley: "Has the leaves broadly margined with yellow, often with a pinkish tinge as well. .... Occasionally shoot tips lose their  green but albino shoots cannot survive on their own. All-green reversions should be removed." Other names may be found in the marketplace such as 'Variegata' or 'Variegatum' which are invalid per Rowley.
Stems: Wiry up to 1 metre long, reddish or with elongate whitish spots, running, hanging or clambering over rocks and bushes, leafless towards the base, sparsely leafy upwards, sparsely branched mainly from base. Internodes up to 10 cm long, longer to subequalling the leaves. The very long stems of this species set it apart from most other crassulas.
Leaves: Opposite, elliptic or ovate, acute, shortly petiolate, 20-40 mm long, 10-25 mm wide, with light yellow or pink borders surrounding a green center, shining. The extent and nature of the variegation can vary, and sometimes the plant will return to the green form. Margin finely serrate, on the inside of which a row of gland dots is evident. (Crassula sarmentosa var. integrifolia does not have serrated leaves.)
Inflorescence: Cymes laxly panicled, round- to flat-topped, hairy with the flowers spreading at right angles to each other.
Flowers: Floral buds fusiform. The corolla is star-shaped, white or cream often with a hint of pink in them, especially when in bud (rarely tinged red).

Subspecies, varieties, forms and cultivars of plants belonging to the Crassula sarmentosa group 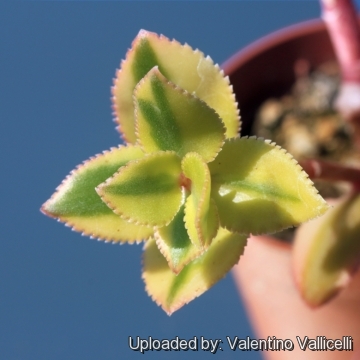 Cultivation and Propagation: Crassula sarmentosa is of easy cultivation and relatively low maintenance, and is a very rewarding bedding plant for full sun and outdoor rockeries, pot plant and green roof plant. It is also a good houseplant, and can be an excellent subject for the beginning succulentophile (it can grow easily on window sills, verandas and in miniature succulent gardens where it is happy to share its habitat with other smaller succulent plants). Some also let it trait out of a hanging pot with its long sarmentose stems. Small white flowers give a nice touch. This is a trailing scrambling plant that can become "leggy" when potted. Snip long trailing tips and plant in the pot to give a fuller look if desired.
Soil: They prefer a very porous potting mix to increase drainage. A acid soil is ideal. You can grow a plant in a 6-10 cm pot for years and have perfectly happy plants. For best results, use a shallow pot.
Watering: Provide some water all year around, in the wild most of the growth occurs during spring and autumn. During the hot summer months, the soil should be kept moist but not overly wet. During the winter months, water only when the soil becomes completely dry. Wet soil quickly causes root and stem rot, especially during chilly winter months, but can re-root if taken care of. No water should ever be allowed to stand around the roots. Low ambient humidity is always needed.
Fertilization: The plants are fertilized only once during the growing season with a balanced fertilizer diluted to ½ the recommended strength.
Sun Exposure: They need full sun or bright, filtered light with ample airflow to stay compact, but avoid direct blasting sun in mid summer (with sun exposure the leaf develops a nice brownish tint), they do not do well in full shade as they tend to etiolate, fall over and rot easily.
Salt tolerance: Crassula sarmetosa is very salt wind resistant.
Pest & diseases: Crassulas are sensitive to mealybugs.
Rot: Rot is only a minor problem with Crassula if the plants are watered and “aired” correctly. If they are not, fungicides won't help all that much. Care must be given in watering, keeping them warm and wet while growing, and cooler and dry when dormant.
Hardiness: Although the plants will survive mild frost if kept dry (hardy as low as -5° C) they should be protected from frost to prevent scarring. USDA 9b-12, the variegated forms are more tender - will not tolerate any frost.
Use: It is an excellent potted plant great for windowsill culture as well as in rock gardens. Indoors only in brightest position.
Pruning: Remove dead flower spikes only.
Propagation: They are easily propagated by the removal of off shoots, remove a lateral shoot and insert the basal part buried in the soil. This shoot should root within a month, and small offshootd will form at the base. They can also be grown from seed.