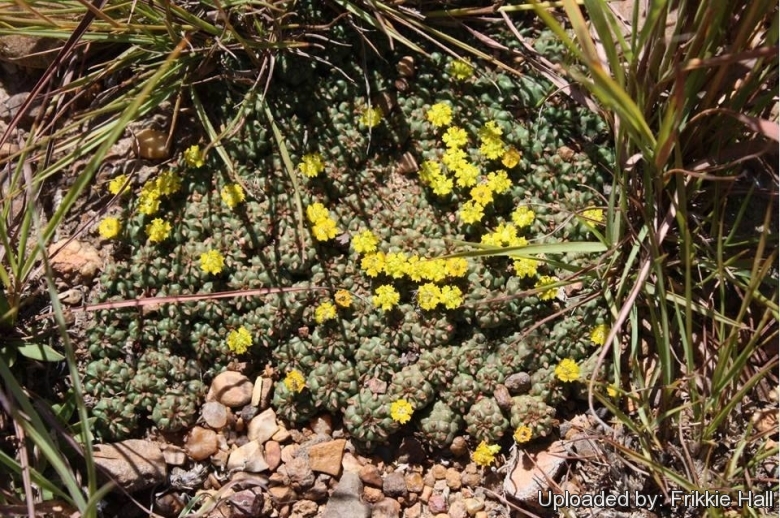 Description: Euphorbia clavarioides var. truncata, formerly known as Euphorbia truncata, is a very dwarf succulent plant, not rising more than 4-8 cm above the ground and 8-20 cm (or perhaps more) in diameter. It differs from the type variety in that its branches have truncate tips, the inflorescence is unisexual and the ovary is hairy. It is a dioecious, leafless and spineless plant, consisting of a thick fleshy obconic body (caudex) tapering into the root-system and buried nearly to the top in the ground and forming a flattish or somewhat rounded (with age) cushions built up little by little through the multiplication of its branching system.
Derivation of specific name: The specific name refers to the likeness to the lichen Clavaria while the varietal name refers to the truncate tips of the branches.
Branches: Produced on the top on very centre of the fleshy obconic body, all rising to the same level and very crowded. Banches on the outer part 25-70 mm and those at the centre about 8 mm long, 8-16 mm thick, simple or the outer branched at their tips, subcylindric or more or less compressed by mutual pressure, tessellately tuberculate, truncate at the apex when alive or when dried often obtusely rounded, glabrous, green or more or less brownish where exposed to the sun at the tips only, brown elsewhere; tubercles at first about as long as broad and 2-3 mm in diameter becoming broader than long, rhomboid and arranged in crowded spirals, not very prominent.
Leaves: Rudimentary, soon deciduous, 2-2.5 mm long, less than 1 mm broad, oblong or lanceolate, acute, channelled down the face, fleshy, glabrous;
Flower. It has an inflorescence in the form of cyathium (apparently a single flower, actually several). Cyathia sessile in the axils of the tubercles at the apex of the branches, about 2 mm long and 3 mm in diameter, cup-shaped, glabrous, with 5 glands and 5 transversely rectangular toothed lobes; glands not contiguous, 2 mm in their greater diameter, transversely oblong, with a depression across their centre and 3–5 teeth 0.25-0.5 mm long on their outer margin, apparently yellow; ovary subsessile, trigonous, without a calyx, thinly sprinkled with rather long hairs; styles 1.5 mm long, very shortly united at the base, very stout, much dilated or suborbicular and channelled at the spreading tips.

Subspecies, varieties, forms and cultivars of plants belonging to the Euphorbia clavarioides group 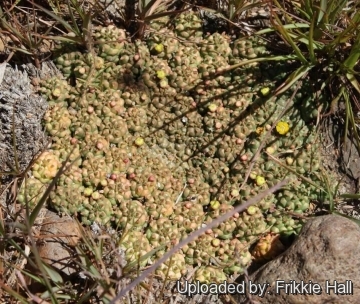 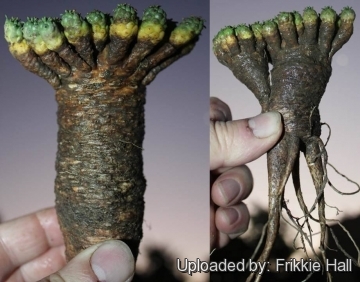 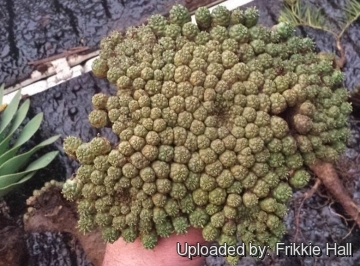 Each branch has a central head and then the new secondary heads develop around it. Photo by: Frikkie Hall 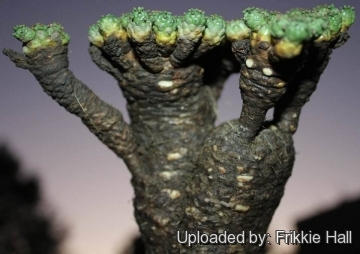 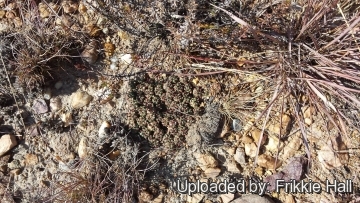 Picture taken in habitat. This after a month of near freezing weather. Very difficult to see between all the other winter colour Photo by: Frikkie Hall 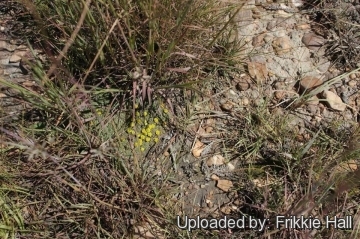 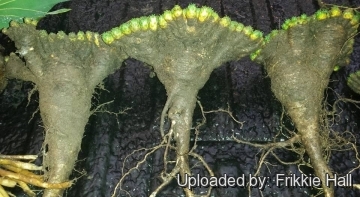 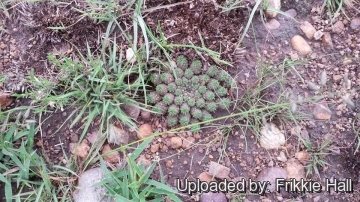 Cultivation and Propagation: Euphorbia clavarioides var. truncata forms a multi-headed, hardy cushion, and looks well between stones in a well-drained situation. It likes a sunny position. It does best in a mineral soil, good drainage is essential. Water sparingly during the summer months and keep dry in winter. It is a slow growing long lived plant and once established, it will be content in its position and with its soil for years. It can tolerate moderate shade, and a plant that has been growing in shade should be slowly hardened off before placing it in full sun as the plant will be severely scorched if moved too suddenly from shade into sun. Euphorbia clavarioides var. truncata has a large tap root and requires a relatively deep pot.
Propagation: Seed, cuttings (separate heads). If you remove an offset, remember to let it dry for a week or so, letting the wound heal (cuttings planted too soon easily rot before they can grow roots). It is better to wash the cut to remove the latex.
Warning: As with all other Euphorbias, when a plant gets damaged it exudes a thick white milky sap known as latex. This latex is poisonous and may irritate skin, so pay extreme attention not to get any in your eyes or mouth.
Cultivated plants must be handled carefully.