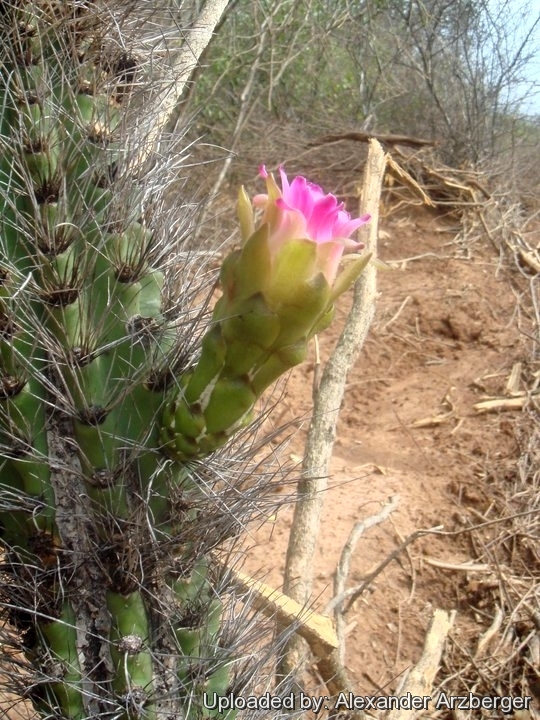 Origin and Habitat: Browningia caineana is known from Bolivia, where it occurs in Cochabamba and Santa Cruz, and from northeastern Paraguay.
Altitude range: It occurs at elevations between 100 and 1100 metres above sea level.
Habitat and Ecology: This cactus grows on sandy soils, in dry thickets that are not suitable for agricultural activities. It grows together with Stetsonia coryne, Cleistocactus baumannii, Monvillea cavendishii, among sparse trees and shrubs covered by Tillandsia and many other epiphytes. Castellanosia caineana is widely distributed, locally abundant, and there are no major threats affecting it. 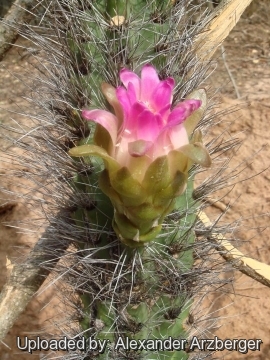 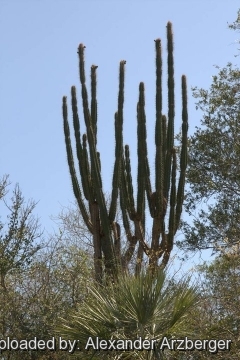 Cultivation and Propagation: Browningia caineana (Castellanosia caineana) is a species which seems to be very rare in cultivation.
Soil: Grow it in a rich and particularly draining substratum, as it is very sensitive to rottenness when in presence of humidity and low temperatures and let the soil dry out between waterings.
Repotting: Repot in the spring, when their roots become cramped. Generally, they should be repotted every other year in order to provide fresh soil. After repotting, do not water for a week or more. Use pot with good drainage.
Fertilization: It grows much faster with a low nitrogen content fertilizer in spring and summer.
Watering: Water regularly from March till October, the thin, fibrous roots suffer if there is humidity, therefore the plant should be watered only when the surrounding terrain is dry. Keep dry as soon as the temperature starts dropping in October and keep it perfectly dry in winter at temperatures from 5 to 15 degrees centigrade. Preferable not to water on overcast days, humid days or cold winter days.
Hardiness: They need to be kept in a cool place during winter rest and are somewhat resistant to frost if kept on the dry side prior to, and during, cold weather with little danger of being killed (unlike most of the Pilosocereus species). In cultivation it is better not to expose it to temperatures lower than 5° C, even if in an aerated and protected location. In the rest period no high atmospheric humidity!!
Sun Exposure: It need full sun exposures with ample airflow for best appearance.
Maintenance: Older plants often need to be supported as they tend to collapse under their own weight.
Propagation: Almost exclusively by seed as the branches cannot be used for cuttings or for grafting. The seeds can be sown in pots of fine, well-drained sandy soil, any time during the spring when temperatures are warm. The seedlings should not be disturbed until they are well rooted after which they can be planted separately in small pots.