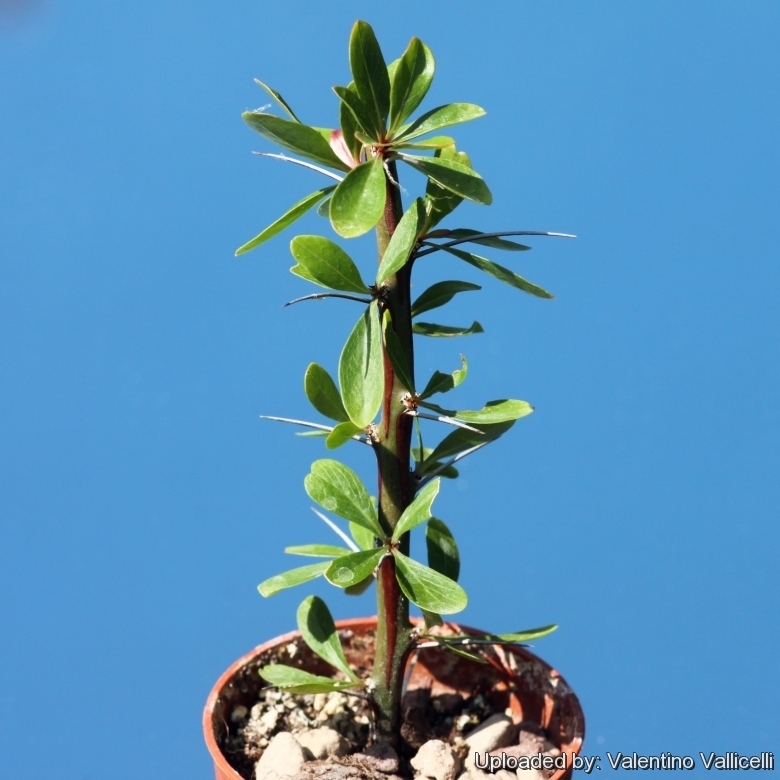 Origin and Habitat: The range of Fouquieria splendens slightly exceeds the limit of the Sonoran Desert throughout southern California and south-western Arizona, Texas and Mexico (Zacatecas and Hidalgo). Small colonies or single plants occur in many localities on the mountains which overlook the northerm rim of the Sonoran Desert. A few rare white flowering specimens of Fouquieria splendens ( a.k.a. Fouquieria splendens f. albiflora) are randomly found among standard red flowering both in habitat and in cultivation
Altitude: 0-1500 m.
Habitat: Dry, rocky hills, on slopes, plains and washes. It occours to a large extent, if not exclusively, in soils which are abundant of limestone, well aerated and possibly also relatively warm. In the drier an lower part of its areal the soil is more sandy and loose.

Description: The typical Fouquieria splendens is a slender, cactuslike, spiny shrub or small tree 2,5 to 6(-10) m high with little branched or unbranched stems and differentiated short and long shoots. The brilliant red flowers make a lovely splash of colour.
Forma albiflora 'Albiflora' in Latin means "white flowering". It is like the species but with beautifully cream-white flowers. The differences with other Fouquieria splendens are in reality very minimal and the two plants are not readily distinguishable, if not flowering.
Flowers: Tube 7-22 mm white.

Subspecies, varieties, forms and cultivars of plants belonging to the Fouquieria splendens group

Cultivation and Propagation: The side branches are often pruned away to enlarge the fat swollen main trunk. It grows best in full sun to part shade. The plant needs moderate watering when growing (in leaf) but keep it dry when it's dormant (not in leaf).
Uses:
1) Individual ocotillo stems are used as poles as a fencing material in their native region, and often take root to form a living fence.
2) Owing to light weight and an interesting pattern, these have been used for canes or walking sticks.
3) Flowers are collected, dried, and used for herbal tea.
4) Fresh flowers are used in salads and have a tangy flavor. They can also be dipped in batter and fried.
Propagation: Seeds or cuttings. Seedling grow fast but need a deep pot to accommodate the the stout taproot.
Transplantation: Is is easily transplanted and widely used in gardens.