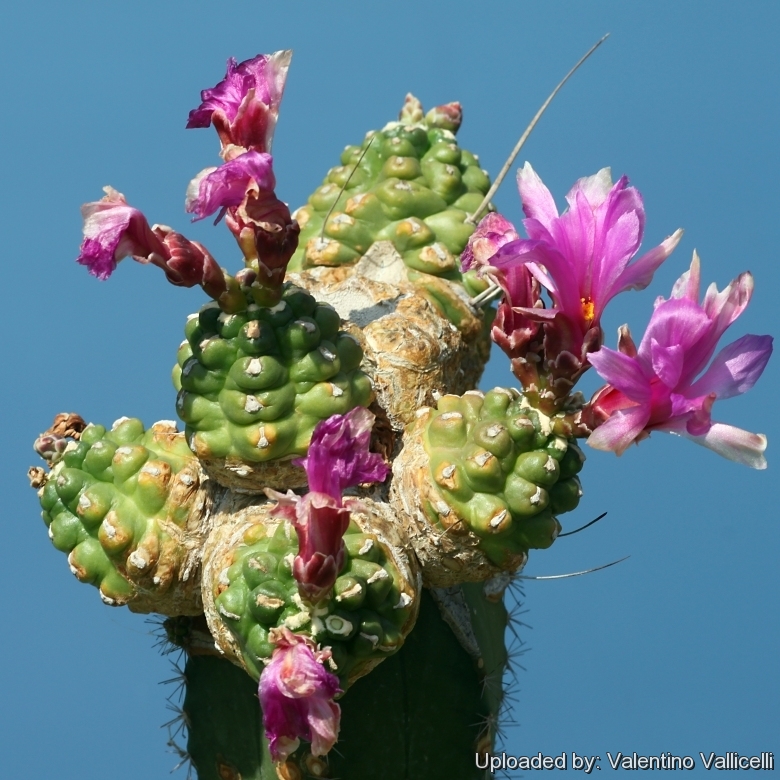 Description: Thelocactus bicolor cv. inermis is a very distintive spineless form. It not only lacks spines but it also has odd fringed flowers often developing in pairs (or even more numerous) from the same areole. The frequent development of flowers buds in groups from the same areole and the nude appearance make this plant very different from the spiny standard Thelocactus bicolor. At the first glance it is really difficult to say that it is a Thelocactus.
Habit: It is a solitary or few branched cactus.
Stem: Globose, ovoidal or slightly pyramidal,8-20 cm tall, 5-12 cm wide, olive-green to purple, depending on the time in the growing season and the amount of sun and water, woolly apex. The base becomes corky with age.
Ribs: 8, distinct.
Tubercles: Rounded, with a woolly groove on the upper side. The axil is naked. With glands.
Areoles: Elongate up to 8 mm long.
Central spines: Completely lacking, or infrequently one solitary central spine.
Radial spines: Absent.
Flowers: 55-110 mm wide, with bizarre shapes in shades of pale-pink to rich-magenta, petals with feathered edges, petals may curl in odd directions, twist or wave, and colours may exhibit flame variations for multiple hues.
Blooming season: Early spring to autumn. 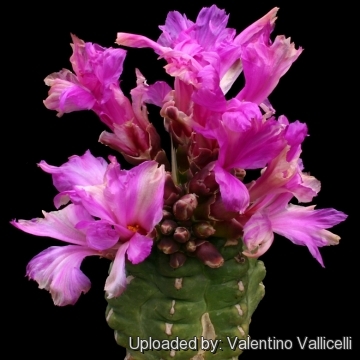 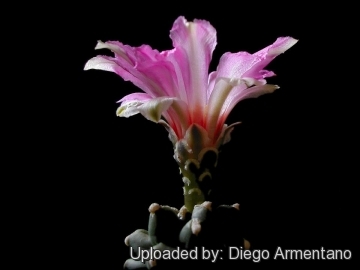 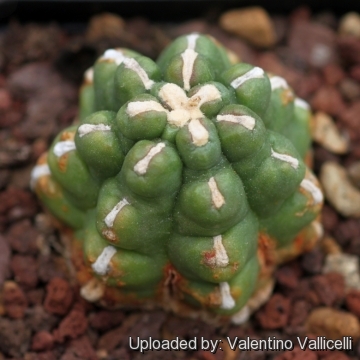 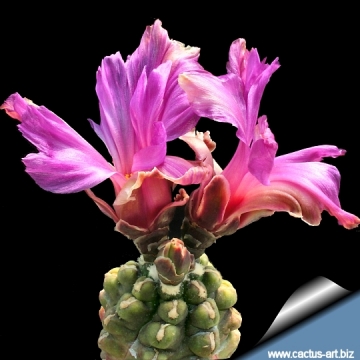 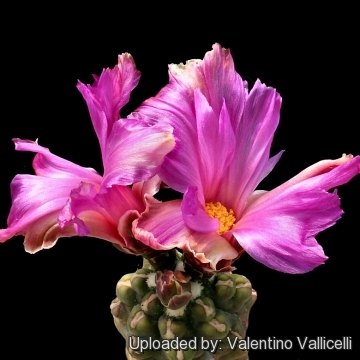 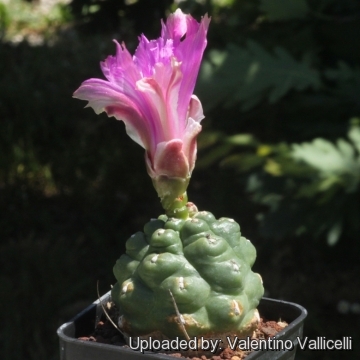 Cultivation and Propagation: Thelocactus bicolor is a summer grower species easy to cultivate, more cold tolerant than most and less fussy regarding soil conditions.
Growth rate: It is a relatively slow growing.
Soils: It likes very porous standard cactus mix soil, but can become too elongated if compost is too rich.
Repotting: Use pot with good drainage.
Watering: Water regularly from Spring to Autumn, but do not overwater(Rot prone), keep dry in winter.
Fertilization: Feed with a high potassium fertilizer in summer.
Hardiness: Reputedly somewhat resistant to frost if kept on the dry side prior to, and during, cold weather (hardy to -7 C ° C, or less for short periods).
Exposition: Requires full sun or light shade and careful watering to keep plant compact. Tends to bronze in strong light, which encourages flowering.
Uses: It is an excellent plant for container growing. It always looks good and stays small. It look fine in a cold greenhouse and frame.
Pests & diseases: It may be attractive to a variety of insects, but plants in good condition should be nearly pest-free, particularly if they are grown in a mineral potting-mix, with good exposure and ventilation. Nonetheless, there are several pests to watch for:
- Red spiders: Red sopiders may be effectively rubbed up by watering the infested plants from above.
- Mealy bugs: Mealy bugs occasionally develop aerial into the new growth among the wool with disfiguring results, but the worst types develop underground on the roots and are invisible except by their effects.
- Sciara Flies: Sciara flies are one of the major problems for seedlings. It is a good practice to mulch your seedlings with a layer of grit, which will strongly discourage the flies.
- Scales: Scales are rarely a problem.
- Rot: Rot is only a minor problem with cacti if the plants are watered and “aired” correctly. If they are not, fungicides won't help all that much.
Propagation: Graft or (rarely) cuttings if available. The cutting should not be disturbed until they are well rooted after which they can be planted separately in small pots.