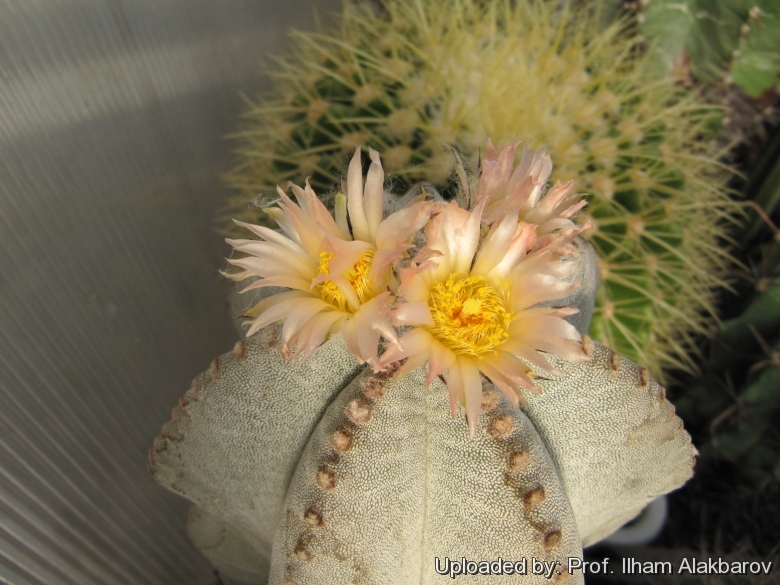 Origin and Habitat: Tula and adjacent areas, Tamaulipas and San Luis Potosí, Mexico.
Habitat and Ecology: It grows on stony, calcareous soils and prefers low densities. Its distribution is limited by its need for stony, calcareous or lime soils. This calcicole also needs carbonates to integrate calcium and make itself more rigid. This species is found in habitat dominated by Agave lecheguilla, which acts as the main nurse plant to Astrophytum myriostigma var. tulense.

Description: Astrophytum myriostigma var. tulense , is a naturally occurring form of Astrophytum myriostigma distinguished by very columnar stems up to 90 cm tall. This plant has 5 twisted ribs and is covered with denser white flock, however the number of ribs is not a stable feature; plants typically add additional ribs as the plant matures, increasing to as many as 10. The tulense variety also has smaller yellow flowers. This taxon is self-sterile. It produces viable seeds only with extra pollination.
Habit: It is a spineless columnar succulent plant, usually solitary. A transverse section of the stem reveal a perfect star shaped form (like the common star-fish) giving the plant the appearance of a bishop's mitre (hence the common name Bishop's cap)
Stem: Globular to cylindric up to 90 cm tall (but occasionally up 150 cm tall) and 10-20 cm in diameter, bright green, covered with many minute white hairy scales that give it a characteristic chalk-white or silvery-grey appearance. The scales are composed of very fine interwoven hairs, which, under a microscope, are very pretty object.
Roots: Fine, fibrous.
Areoles: Closed together
Spines: Wanting.
Ribs: Usually 5 increasing to as many as 10 as the plant matures, vertical or twisted, regular, deep, prominent, very broad and sharp to rounded .
Flowers: Funnelform, usually less than 5 in diameter cm long glossy yellow and sweet scented from the areole at the tip of the stem on mature plant. Outer perianth segments narrow, with brown scarious tips. Inner perianth segments numerous, oblong yellow with a silky shine. Scales on ovary tube scaroious, imbricated, very narrow often bristly tipped, with long wool in their axil.
Blooming season: Flowers appear intermittently throughout the warm months from April to September. Plants may take up to six years to flower.
Fruit: 2-2,5 cm in diameter, greenish to tannish-red, covered with brown, overlapping scales, with long wool in their axil.
Seeds: Dark brown, helmet-shaped, shining, with a large depressed hilum, the margins being turned in. 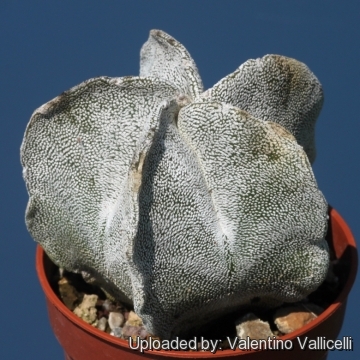 Cultivation and Propagation: Astrophytum myriostigma is a summer grower species relatively easy to grow. It is sometime seen as a grafted plant but grows very well on its own roots too.
Growth rate: It is a slow growing and easily flowering species.
Soil: Use mineral well permeable substratum with little organic matter (peat, humus), plants may become too elongated if compost is too rich.
Repotting: Re-pot every 2 years. Use pot with good drainage.
Fertilization: It grows much faster with a low nitrogen content fertilizer in spring and summer. Potassium helps maintaining the plants compact and healthy.
Watering: Requires careful watering to keep plant compact. Water sparingly from March till October, the thin, fibrous roots suffer if there is humidity, therefore the plant should be watered only when the surrounding terrain is dry. Keep dry as soon as the temperature starts dropping in October and keep it perfectly dry in winter at temperatures from 5 to 15 degrees centigrade.
Hardiness: They need to be kept in a cool place during winter rest and are somewhat resistant to frost if kept on the dry side prior to, and during, cold weather (due to the altitude they are hardy to -5 C ° C, or less for short periods). Although it is one of the easier Astrophytum to grow, it tends to rot in winter during the resting phase, if kept wet. In the rest period no high atmospheric humidity!!
Sun Exposure: Light shade to full sun, its colour tends to richer and darker when grown in light shade.
Uses: It is an excellent plant for container growing. It always looks good and stays small.
Pests & diseases: It may be attractive to a variety of insects, but plants in good condition should be nearly pest-free, particularly if they are grown in a mineral potting-mix, with good exposure and ventilation. Nonetheless, there are several pests to watch for:
- Red spiders: Red spiders may be effectively rubbed up by watering the infested plants from above.
- Mealy bugs: Mealy bugs occasionally develop aerial into the new growth among the wool with disfiguring results, but the worst types develop underground on the roots and are invisible except by their effects.
- Scales: Scales are rarely a problem.
- Rot: Rot is only a minor problem with cacti if the plants are watered and “aired” correctly. If they are not, fungicides won't help all that much. To prevent rottenness it is also advisable to surround its root neck by very rough sand or grit, this help a fast water drainage.
Propagation: Almost exclusively by seed. Plants are sometimes grafted onto column-shaped cacti. Cutting scions from a flourishing plant is almost a crime because the scions do not root easily.
Remarks: This quite variable plant has been widely grown for years and is now available in several cultivated variety and several breeds do exist. The famouse “Onzuka” is only one of these and though maybe the most beautiful, but a lot of other forms are represented in many collections.