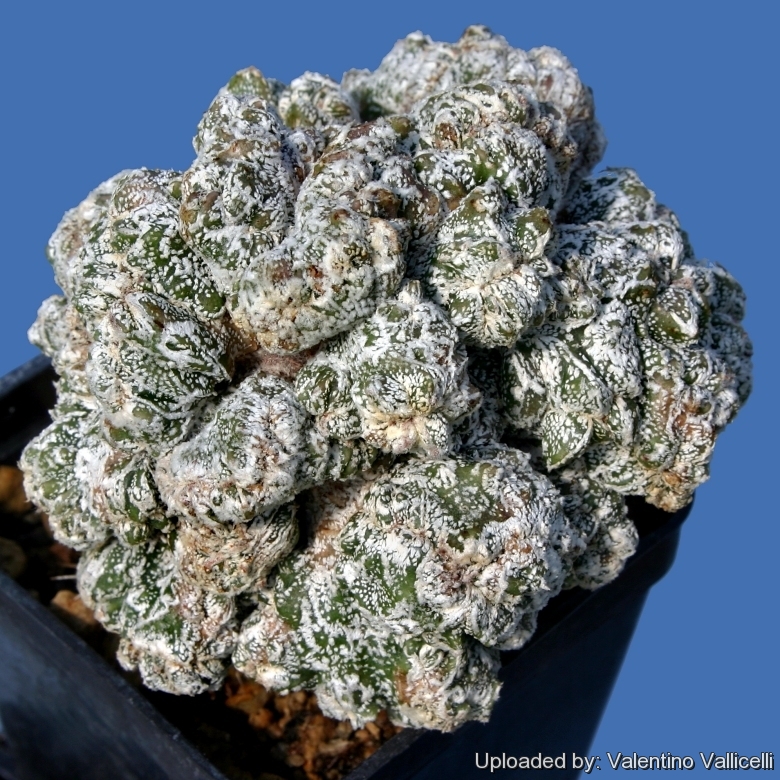 Description: It forms large low clusters of white textured monstrous and crested stems, and the plant looks more like some non-cactus succulent than a cactus. These plants show different crested and monstrous shapes. There are several crested forms mainly selected by Asian growers.
The cause of monstrosity and cristation: The cause of anomalous form of growth is not fully explained. Biologists disagree as to why some Astrophytum grow in this unusual form. Some speculate that it is a genetic mutation. Others say it is the result of a lightning strike or freeze damage, but whatever the stimulus, the growth point of the stem has switched from a geometric point, to a line, which folds and undulates as the crest expands. Though these crested cacti are somewhat rare (1 in 50,000 or less), cresting occurs naturally and can be encountered in many other cactus species. 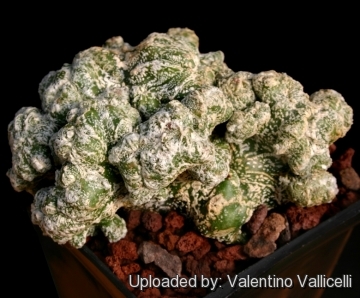 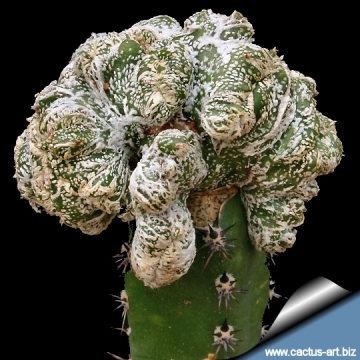 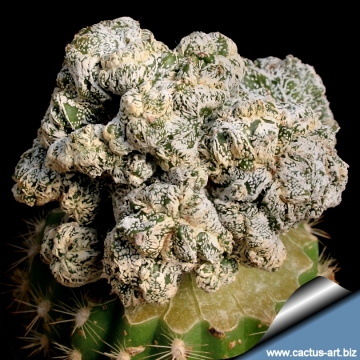 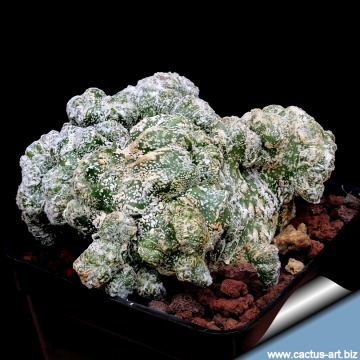 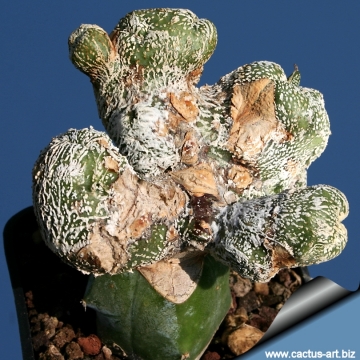 Cultivation and Propagation: Astrophytum myriostigma cv. Onzuka cristata (monstruosa) is not too difficult in a greenhouse, although grows quite slowly. It is usually seen as a grafted plant but can grow on its own roots too.
Soil: Use a mineral well permeable soil with little organic matter (peat, humus).
Exposure: They need a good amount of light shade to full sun this help to keep the plants healthy, although slow growth. Keep well ventilated, as it is prone to root rot.
Watering: Water sparingly from March till October (weekly during summertime, if the weather is sunny enough), with a little fertilizer added. Less or no water during cold winter months, or when night temperatures remain below 10° to prevent root loss. It is sensitive to overwatering (rot prone).
Fertilization: Feeding may not be necessary at all if the compost is fresh then, feed in summer only if the plant hasn't been repotted recently. Do not feed the plants from September onwards as this can cause lush growth which can be fatal during the darker cold months.
Hardiness: Keep perfectly dry in winter at temperatures from 5 to 15 degrees centigrade. In the rest period no high atmospheric humidity!!
Monstrous growth: Monstrous varieties of plants, where the variation from normal growth is due to genetic mutation, can occur randomly on normal plants. Sometimes it's due to damage, but generally the causes are unknown. A monstrous plant may may revert to normal growth for no apparent reason.
Propagation: Grafting (usually) or by cuttings that are hard to root. Plants are usually grafted onto column-shaped cacti but proved to be able to produce their own roots if degrafted. Cuttings will take root in a minimum temperature of 20° C (but better in hot weather).