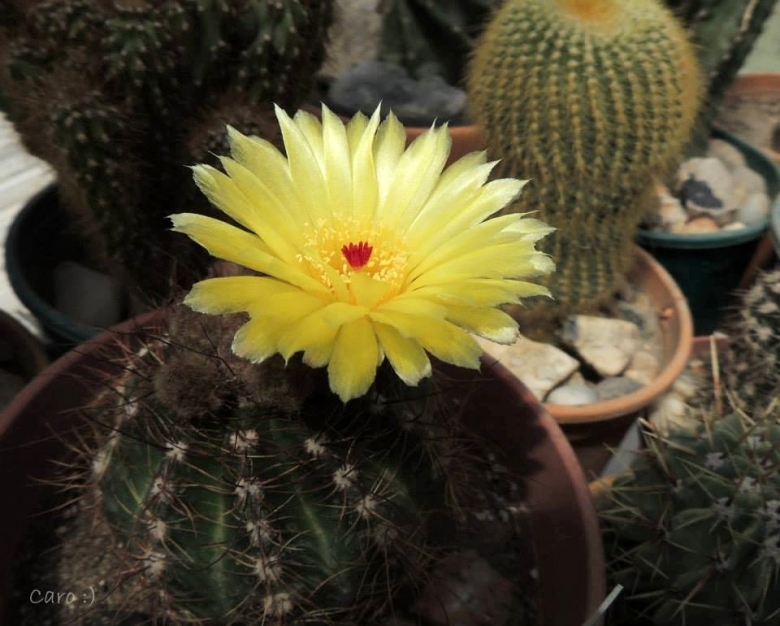 Origin and Habitat: Parodia ottonis is widespread in South America in South Brazil, Uruguay, North-east Argentina and South Paraguay.
Habitat: Subtropical grasslands. And also in this area are several species of Frailea.

Description: Parodia ottonis, better known as Notocactus ottonis, is a common attractive dwarf clumping cactus and particularly is fun as it matures and flowers at an early age. This is one of the most variable species in the genus and has lots of unnecessary synonyms and comprises a multitude of different regional forms as well as various cryptic allied species including the Parodia linkii, Parodia oxycostata, Parodia carambeiensis amd Parodia muricata. But where each form is linked to others by populations of plants with intermediate characteristics. This species is in cultivation with many cultivated and propagated forms. Generations of cactophiles have had this plant as one of their first acquisitions and few can have been disappointed by its easy cultivation and free-flowering habit.
Habit: Simple at first later usually clustering, the plants may form large clumps developing offsets on stolons which may emerge up to 20 cm away from the parent plant,
Stems: More or less spherical, tapered at base, eventually cylindrical with a flattened top, 2-15 cm in diameter (mostly less than 10 cm), light. Deep-green, bluish green, and can get deep purplish to maroon during winter dormancy, though this colour can be retained if grown in sufficient light. However the new growth is green but will soon darken to match the older epidermis.
Ribs: 6-12, rarely up to15, well defined. rounded or acute.
Spines: Slender hair-like, straight, curved or twisted, relatively sparse that does not hide the epidermis.
Central spines: 1-6, sometimes difficult to distinguish from radials, yellowish, pale to dark brown, light rose, reddish brown or black, 8-40 mm long tending to point downward.
Radial spines: 4-15 spreading radially, with a starlike appearance, whitish, yellow, pale rose or brown. 5-30 mm long.
Flowers: 3,5-6 cm in diameter, few often closely packed apically, bright satiny yellow in one rare variant orange-red, pericarpels and tube with dense white to brownish wool and bristles. Stigma-lobes usually red or purplish, rarely orange or yellow.
Fruit: Ovoid to short oblong. 9-12 mm in diameter green, not elongating at maturity, thin to thick-walled. dehiscent lengthwise to expose the seeds and white pulp.
Seeds: 15-100 per fruit. Bell-shaped glossy black, 1,2-1,4 long and 11,7-1,2 mm broad strongly tuberculate. 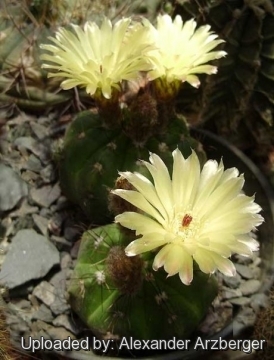