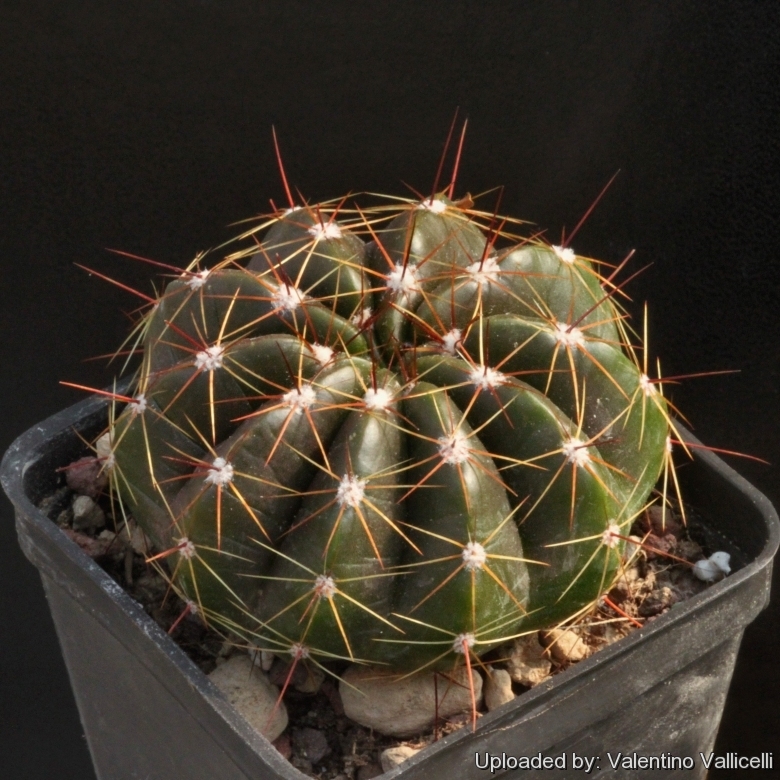 Description: Notocactus ottonis var. paraguayensis (firstly described as Echinocactus ottonis var. paraguayensis by Heese in 1905) is a local or morphological form of the widespread and variable Parodia ottonis , but not sufficiently differentiated and considered merely a local variant of the latter (if not the same). Notocactus ottonis var. paraguayensis is at most a race of Parodia ottonis . The key difference by which the two were separated, namely the ribs less rounded, almost acute and the longer reddish-brown spines, appear to fall within the natural variation of Parodia ottonis and it should be synonymized with the latter. The plants are also slightly smaller than the type of the species.
Stem: 48-60 mm wide, 35-50 mm tall, clumping darker green and can get deep purplish to maroon during winter dormancy, though this colour can be retained if grown in sufficient light. However the new growth is green but will soon darken to match the older epidermis.
Ribs: 8 to 9, deeply cut, vertical, up to 6 mm hight, maximum width at the base 12-18 mm.
Areoles: 4-5 mm in diameter, illiptical to round, 10 to 16 mm apart.
Central spines: 3, light brown to reddish, 12 to 20 mm long, the lowest the longest.
Radial spines: c. 9 light brown, reddish-brown, or yellowish.
Flowers: 37 to 40 mm long, 48 to 57 mm wide, deep yellow, with a slight reddish stripes; Inner perianth segments to 25 mm long. Corolla tube with green scales, axils with wool and 2-3 dark brown bristles (10 mm long). Style yellow, 2 mm in diameter, 22 to 24 mm long. Stigma 4 mm Ø, lobes 11, 3 to 4 mm long, purple. Stamens to 25 mm long, at the level of the stigma, above yellow, orange below, and red- purple at the base. Anther intensely yellow.