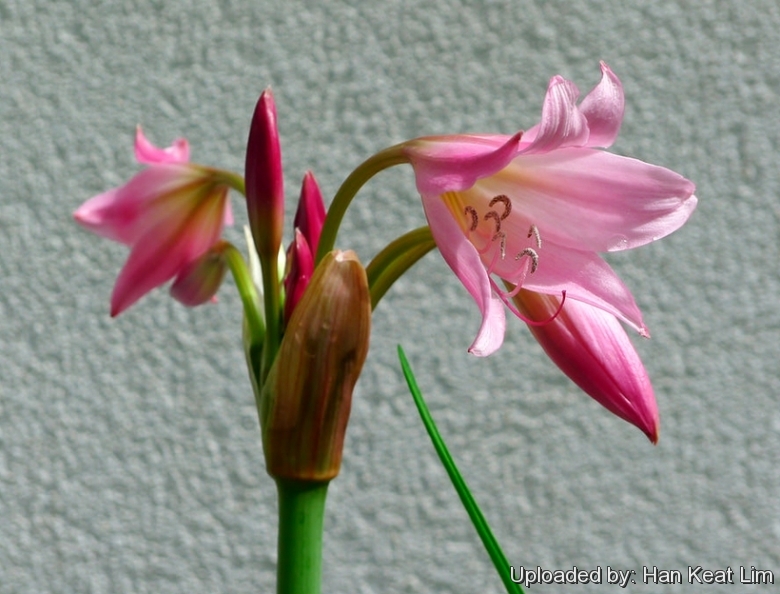 Origin and Habitat: Crinum powellii is an artificial hybrid or cultivar: both parent species are from South Africa and tend to grow in damp, wet soils; along the edges of rivers and in the margins of swamps and bogs.

Description: Crinum powellii is quite one of the most beautiful bulbs with delightful pink to white, trumpet-shaped sweetly perfumed blooms. According to the late Mr. F. W. Burbidge, in The Gardener for January 25, 1890, Crinum Powellii was raised about fifteen or more years before that date by Mr. O B. Powell. Mr. Powell crossed both the rosy and white forms of Crinum bulbispermum, the Orange River lily, with pollen of Crinum moorei, the Natal Lily, and the result was about a hundred seedlings of the plant now known as C. Powelli, altogether a more vigorous plant than either of its parents. The flowers varying in colour from deep rose-crimson in the bud, to pure white. Practically speaking, there are three distinct garden forms of this hybrid, a dark rosy flower (variety 'roseum'), a light rose or flesh-coloured variety, and the pure white form, which is greenish in the bud (variety 'album'). Full-grown bulbs develop long strap-like leaves about 90-120 in length; the sturdy flower spike, which develops from the side of the bulb is thrown well above the foliage, and bears an umbel of broadly funnel-shaped flowers opening in succession, so that a single spike continues in flower for several weeks. Very luxuriant clumps may throw up from 5 to 40 spikes each season, and are very attractive. Eventual spread about 2 metres.
Bulb: Globular to much elongated or pear shaped, 7 (or more) cm in diameter, fitted with a short or long neck protruding above the soil surface.
Foliage: The foliage is lush and exuberant, with numerous, strap-like leaves 90-120(-180) cm long, 7-10 cm wide, smooth, bright green, very decorative, that can cover a large area as the plant clumps.
Inflorescence: The leafless scape, which develops from the side of the bulb, is from 60 to 120(150) cm in height, solid, glaucous, compressed and bears an umbel with 6 to 9(-15) flowers.
Flowers: Large, fragrant, broadly funnel-shaped. The tube is about 7 cm long and somewhat longer oblong-linear segments.
Booming season: Summer
Chromosome number: 2n = 22

Cultivation and Propagation: Crinum powellii is a pretty cold-resistant species. The bulbs are planted in the spring to 25-30 cm deep, in a sunny, warm place and, if possible, sheltered in a fertile, well-drained soil. In cold climates, growing in pots, indoors or in greenhouses and outdoors in the warmer months it is advised.
Exposure: Does not like shade. A sheltered spot is necessary, as the 150 cm long leaves get twisted about, and often broken or torn in exposed places.
Soil: Crinum powellii thrives in all types of soils including clay, but prefers a deep rich well-drained soil. One should dig a very large hole to a depth of 60 cm, and then fill it full of good, rich compost made up of turfy-loam, coarse ravel or pit sand, peat fibre and leaf mould. Does not like shallow compacted soil or not having enough room to grow into. For pot culture peat soil and sand in equal parts substrate is used.
Water requirements: Should irrigate and fertilize regularly. Both parent species tend to grow in damp soils along the edges of rivers and in the margins of swamps and plants respond well to damper patches and regular waterings in the summer months.
Hardiness: Hardy in most temperate regions if grown correctly. Needs to be mulched generously and the bulbs should be bedded in sand or grit to prevent rot. In the wild, the two parent species usually grow with the long necks of their elongated bulb protruding above the surface and this is the usual advice for planting them, however, it does not hurt them to be planted a little deeper and this is useful winter protection along with a generous mulch in late autumn.
Pest and diseases: Slugs and snails may badly damage the new emerging leaves in spring. As the season progresses the large clumps of foliage tend to harbour the molluscs and regular patrols during wet weather are a good idea.
*Warning: The raw bulbs may cause nausea, persistent vomiting, and diarrhea if ingested. Them are few case reports of poisonings in the medical literature. The symptoms seen should be much like those of Narcissus, with early onset of symptoms and a duration of several hours.
Propagation: The multiplication is performed in the spring by division of the small bulbs that grow off the main bulb.