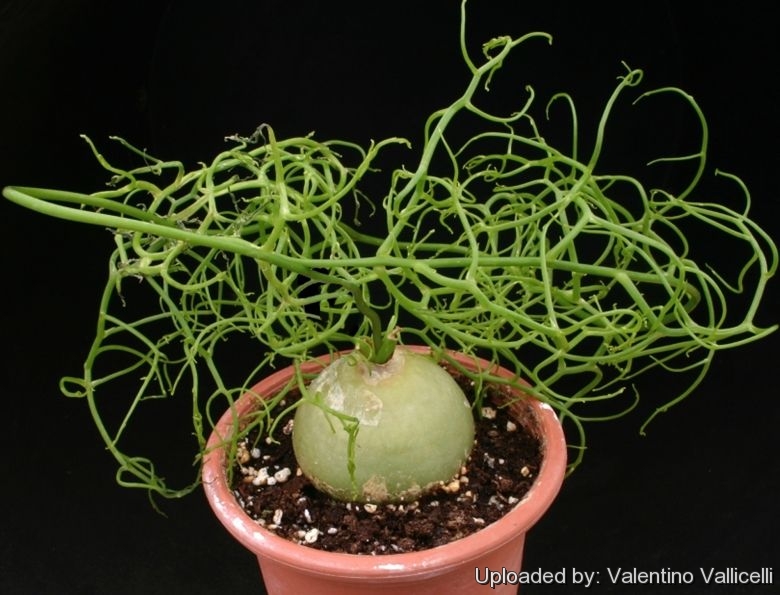 Bowiea volubilis Photo by: Valentino Vallicelli
Bowiea volubilis is an odd-looking long lived bulbous plant that is easy to grow. It produces frothy strands of foliage and myriads of yellowish-green delicate flowers in late winter/late spring.

Origin and Habitat: Bowiea volubilis (subsp. volubilis) is widespread in South Africa (Estern Cape, Gauteng, KwaZulu-Natal, Limpopo, Mpumalanga), and elsewhere in Easter Africa (Zimbabwe, Malawi, Zambia, Tanzania and Kenya).
Altitude range: This species grows at low and medium altitudes (300-2320 metres above sea level).
Habitat and Ecology: Albany Thicket, Grassland, Savanna, evergreen bushland and woodland on rocky soils, usually along mountain ranges and in slopes with thickly vegetated river valleys, often under Brachystegia clumps and in boulder screes, sometimes found scrambling at the margins of karroid, succulent bush in the Eastern Cape. Occurs in bushy kloofs at the coast and inland in KwaZulu-Natal. In Gauteng, Mpumalanga and North West Province it is often found in open woodland or on steep rocky hills usually in well-shaded situations. The stems surround shrubby support; the bulbs grow in shade of bushes, partially covered with leaf litter. Tolerates wet and dry conditions, growing predominantly in summer rainfall areas with an annual rainfall of 200-800 mm. Generation length is estimated to be 10 years. This subspecies is under severe pressure from medicinal plant harvesting over the majority of its range in South Africa.

Description: Bowiea volubilis (climbing-onion, sea onion) is an interesting long living deciduous, perennial bulb. It is generally considered a succulent in the broad sense. The plants have many overlapping scales, which form tight, pale green, spherical bulbs that grows to 20 cm above the soil and to 25 cm in diameter (could take 70 years). The bulbs send up a twining fresh-green branched stem with few linear deciduous leaves. Dormant in winter, when the outer scales and many of the scale tips dry to a paper-like state, the plants burst to growth in late spring or summer, producing one or more very fast-growing stems that needs to be supported by a trellis or stake. The stems are covered with many leafless side-branches that may fall off. The small greenish-white flowers appear in spring. Two subspecies are recognized, the nominate form and Bowiea volubilis subsp. gariepensis (van Jaarsv.) Bruyns.
Bulb: Onion-like, depressed-globose, 1.5-16(-30) cm in diameter and usually grows half buried in the soil, but may be subterranean or fully exposed, exposed parts pale green. Tunics thickly fleshy withering to paper-thin brownish skins, like an onion.
Roots: Fleshy, white, to 5 mm in diameter.
Stems (inflorescences): Each year in late winter, the bulb develops a new branched scrambling, twining or climbing, green flowering stem (raceme) that somewhat make it looks like an elongated, leafless, asparagus but is much more tender, the stem (wine) can reach 2.5-6(-10) metres, it grows with great vigour and determination, and hangs up any nearby support it finds on its way. As it matures, dense lacy branches form and give a full appearance. Branches subulate to 7 cm long, 2-7 cm in diameter. When fall arrives, the growth dies back going into a period of dormancy. Bracts narrowly-lanceolate, 3-5 mm long, with a short spur.
Leaves: There are no leaves except for 1-2 true leaves that emerge from the middle of the bulb and perishing early, they are small, linear-lanceolate, canaliculate, very short lived and are soon replaced by the flowering stems of true scales leaves that drop rapidly.
Flowers: Single, starry, 6-lobed, diurnal, greenish or white 10-16 mm wide, scattered on the long twining raceme. Pedicels arched. 2-10 cm long. Tepals free to the base, 5-9(-12) x 3.5 mm, white or green to yellowish-green, patent or reflexed, oblong to lanceolate, margins revolute toward the base, apex subacute. Styles 6, terete, stigma three lobed. Filaments suberects. Blooms are produced only in moderate to full sun where the plant produces dozens of flowers on each shoot. The flowers have an unpleasant smell.
Blooming season: Spring and sometime will bloom twice in a year.
Fruits (capsules): 3-locular, ellipsoid, apex pointed, 8-25(-30) mm long with accuminate valves, dehishing longitudinally.
Seeds: Black, angular-oblong, shiny, 5-10 mm long. 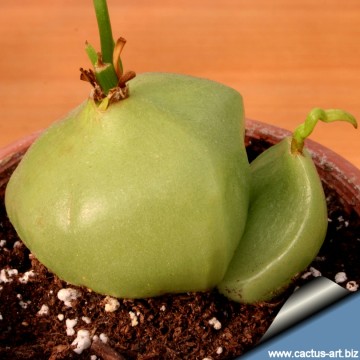 Over time, the bulbs eventually split to produce two bulbs and even more as the plant becomes very old. Photo by: Cactus Art 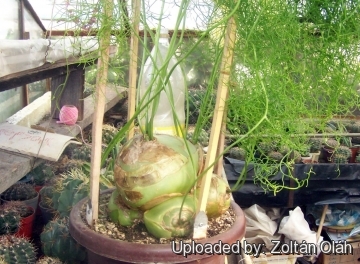 - In a group of plants known for many interesting oddities, Bowiea volubilis is one of the great curiosities of the succulent world. It produces large onion-like bulbs that may measure from a few cm upward to as much as 25 cm across. Photo by: Zoltán Oláh 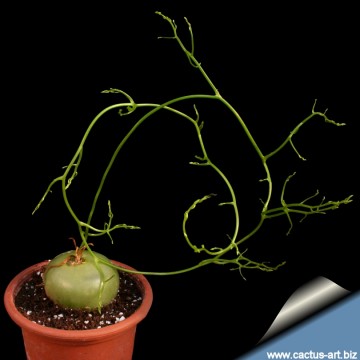 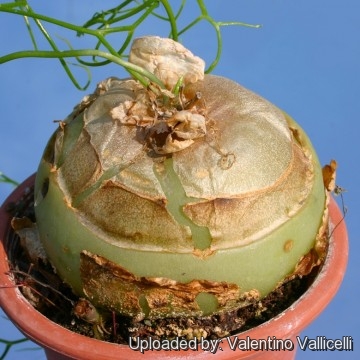 The bulb looks like a globe of green jade resting on the ground, sometimes camouflaged by a paper-thin, brownish "onion skins". Photo by: Valentino Vallicelli 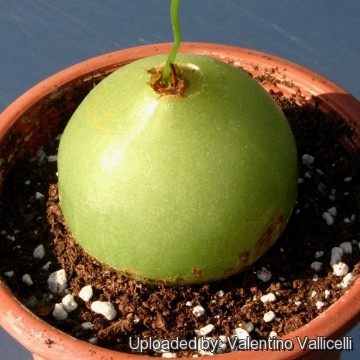 Bowiea bulbs are comprised of tightly clustered modified leaves, which serve as reserves of nutrients and moisture. Photo by: Valentino Vallicelli 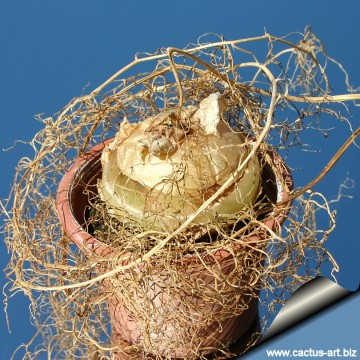 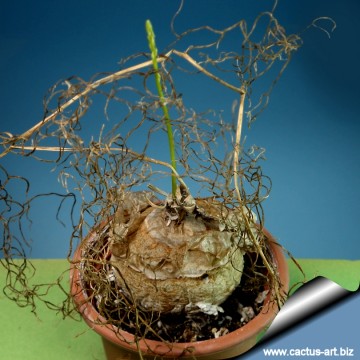 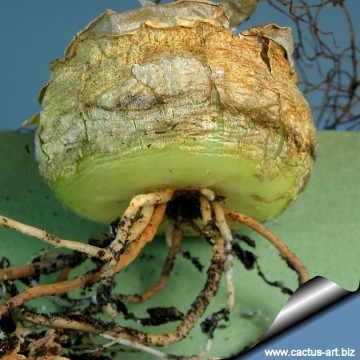 Cultivation and Propagation: The climbing onion has definite growth and dormant stages. During the active stage in late winter, bowiea will produce long, entangled vines, which are actually the flower stems of the plant. As it matures, dense branches form and give the plant a full facade. Then, if the plant receives enough sunlight, myriad star-shaped, greenish-white flowers will scatter themselves along the stems. Unfortunately, their scent is as odd as the plant itself. When fall arrives, the growth dies back and the bulb goes into a resting period. This plant truly thrives on neglect. An old favourite that’s easy to grow and puts on a fanciful display but it took years to acclimate; this is not a plant for the impatient gardener. It likes well drained, organic soil (e.g. use a mixture for cactus + normal potting soil) and regular watering during the active growing season. Let the soil become rather dry before watering again
Stop gradually watering when the stalk dries out after blooming, in summer or else the bulbs may rot. Start watering when the stalk starts growing again in late winter. ) It can be planted undergrounds, with a thin soil layer on it, or just leave it “on” the ground, it will root anyway, and the chances of getting rot are smaller this way rather than planted undergrounds (although it grows slower). Protect from heat in summer. Light shade to full sun, keep bulb shaded.
Pests and Diseases: Mealy bugs seem to be a problem, especially in older specimens that have formed a clump of bulbs. They hide in the residue of the old, dry, dead bulb scales.
Propagation: Seeds, detach offsets when repotting , but can also be reproduced by dividing the bulbs. In fact any small (or large) fragment of a nice green bulb scale will sprout little baby bulbs if allowed to callus on the edges when simply placed on a bright windowsill. Just leave them until they have pulled all the nourishment they can from the "mother" bulb scale which will then dry up, then remove them and pot up.
Warning: Despite its common name of climbing onion, all parts of a Bowiea are toxic and contain cardiac glycosides. They are only dangerous if eaten in large quantities but they may produce a minor skin irritation in people who have a sensitivity to the compounds, but H. Jacobsen claims it can be eaten.