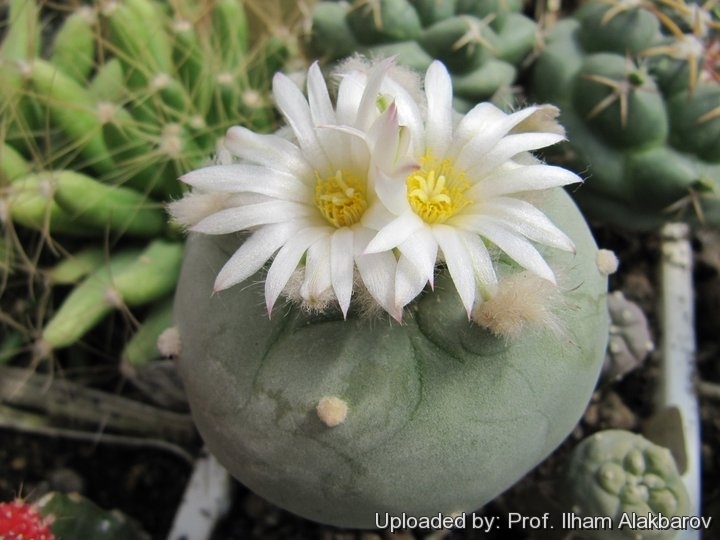 Origin and Habitat: Endemic of the of the state of Querétaro, México it grows only in a small area between Vizarron, Bucareli, and Toliman. L. diffusa occurs at the southern end of the range of the genus.
Habitat: Xerophytic shrubland. Lophophora diffusa grows mainly beneath the canopy of some locally dominant shrubs and possible nurse plants (e.g. Larrea tridentata and Acacia sororia)

Description: The ssp. kubesai is a globular spineless plant with a large tap root. It is very similar in all aspects to the standard Lophophora diffusa, and is not easily distinguishable as a young plant.. The particularity of this subspecies will be revealed only in older specimens that are larger in size and tend to form large multi-headed heaps, up to 1,5 mt in diameter (in contrast to the typical single stemmed L. diffusa specimens).
Stem: Lacking well-defined ribs and furrows. The epidermis is glaucous-yellow-grey.
Ribs: 5 to 13, the podaria are are broad and flat.
Areoles: With tufts of hairs that usually spread unequally on the scarcely prominent podaria.
Flowers: The flowers are whitish or pinkish (rarely red) , reaching over 3 centimetres in diameter.

Notes: This is a relative of Lophophora williamsii, the true Peyote. It has many morphological and chemical differences, and does not contain the same substances as L. williamsii. This species contains no trace amounts of mescaline like the Peyote. But it does contain a lot of other alkaloids, the principal of which is pellotine. It is not narcotic and is not specifically named in the law, and it is probably legal to possess. 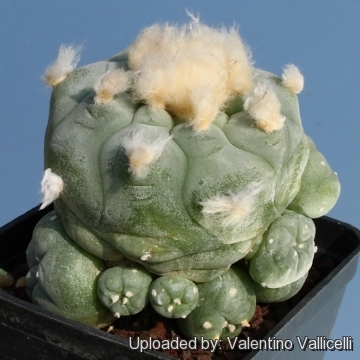 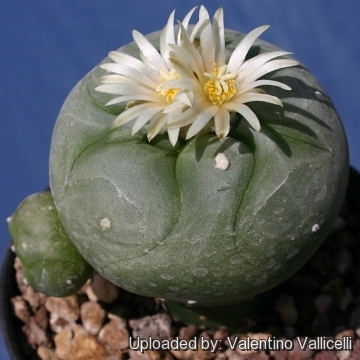 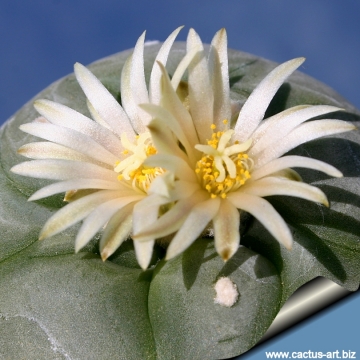 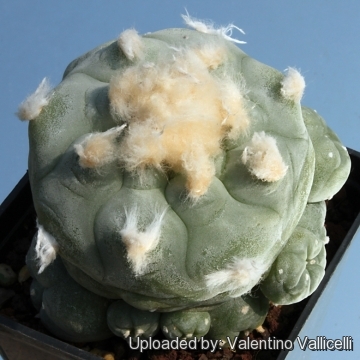 Cultivation and Propagation: Slow growing. It requires partial shade in summer, full sun the rest of the year.
Grow it in a narrow and deep container to accommodate the tap root. They are very rot prone, so use highly gritty compost with much drainage.
Waterings should be rather infrequent, to keep the plant compact and avoid it becoming excessively elongated and unnatural in appearance. Watering it properly is often difficult, because this plant tends to crack open or rot if over-watered. The fact that the plant retracts into the soil and assumes a grey-green colouring between waterings is perfectly natural, and doesn’t cause any damage.
Like other arid zone cacti, it requires a dry and cool over-wintering. Otherwise they may succumb to rot. This also promotes flowering. Assure a good ventilation.
Propagation: Seeds. Seeds should be sown in spring in sterile cacti mix. Cover with a humidity dome or plastic wrap and leave in a warm spot in 50-75% shade. Fluctuating temperatures are best (ie. high daytime temperatures and low night-time temperatures), as they simulate the desert environment. Keep constantly humid, as seedlings cannot survive if too dry. Seedlings will emerge in 7-21 days, and can be grown in the same environment for a number of months. Mulch with a thin layer of small quartz gravel (1-2 mm in diameter). This helps them stay upright, hinders algae growth, and regulates moisture. As they get older, the watering can become less frequent. Potting up can be done when 5-10mm in diameter.