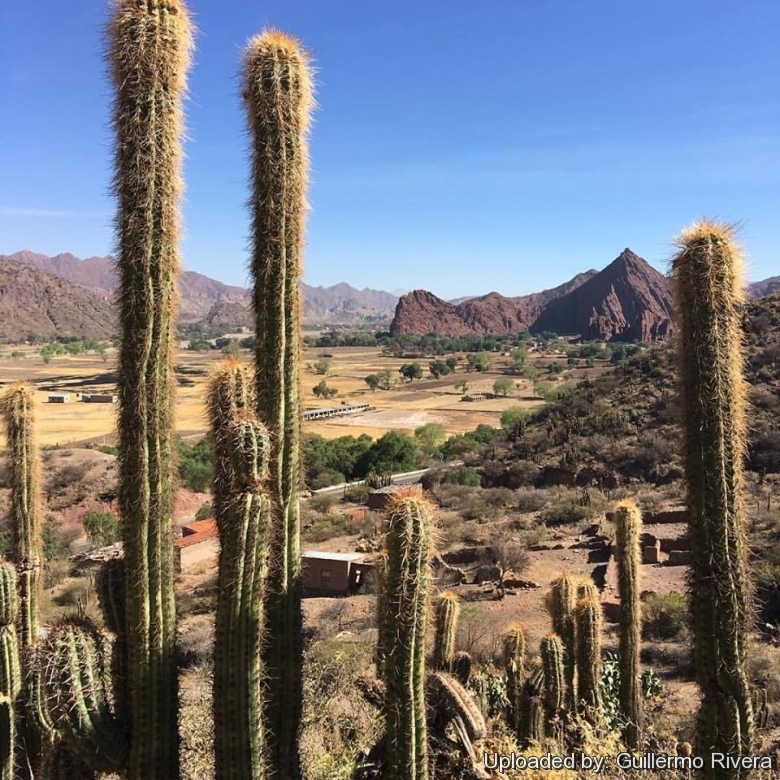 Origin and Habitat: Taquimbala province, Cochabamba, Bolivia on dry slopes at altitudes from 2800 to 3100 meters.
Habitat and Ecology: This cactus is locally abundant in seasonally dry inter-Andean valleys with sparse forests, more frequent on northern slopes. There are no major threats to this species [1] [6] [9].

Description: Echinopsis tacaquirensis subs. taquimbalensis (Trichocereus taquimbalensis) distinguish from the similar Echinopsis tacaquirensis for having clearly distinguished central and radial spines. (typically in subsp. tacaquirensis the spines are bristly and not readily distinguishable between central and radial). E. tacaquirensis subs. taquimbalensis has has bright green, few branched stems. In the wild, they can be more than 2.5 m tall and reach the impressive diameter of 15 cm. It is unlikely that they are this size in a greenhouse. The hard needle-like spines at first are translucent, caramel-coloured and then proceed from brown to dark brown. In nature E. tacaquirensis is seldom found while E. tacaquirensis subsp. taquimbalensis is extremely common and if any one of them should be a subspecies, it should definitely be tacaquirensis.
Derivation of specific name: "taquimbalensis" for the occurrence in the Taquimbala province, Cochabamba, Bolivia.
Stems: Columnar, 0.5-2.5 metres tall erect to slightly arched. Branches 6-15 cm thick, with pale to bright green waxy epidermis.
Ribs: 8-9 (or more) obtuse, 3-5 (or more) mm deep, 8-10 (or more) mm wide.
Areoles: Rounded to elliptic in shape about 5 mm in diameter diameter, prominent (stand out up to 1 centimetre), at first white, then brownish felted, 8-15 mm apart.
Spines: All needle-like, sharp, at first bright brown and later yellow or grey with a swollen base.
Radial spines: 8-13, mostly 1.5-3 cm long.
Central spines: 2 or 3 with thickening knobs at the base, one (or 2) pointing upward 3-5 cm long and one pointing downward up to 7(-8) cm long.
Flowers: Few lateral, around the tip of the branches, white, funnel-shaped up to 20(-23) cm long. Ovary spherical or ovoid, 2-2.2 cm in diameter, covered by broad, pale green scales, about 4 mm long, densely clothed with white and brown hairs. Floral tube 10 cm long, 1.5 mm in diameter covered by thick, green, acute scales, densely clothed with white and brown hairs. Outer perianth segments 5-10 cm long, straight, greenish-purple. Inner perianth segments 7-9(-12) cm long, spathulate, pointed, with wavy margin, whitish. Stamens very numerous, in two whorls, lowermost ones up to 8 cm long, uppermost ones 4.5 cm long. Filaments greenish becoming yellow above. Anthers yellow. Style protruding above the anthers up to 16 cm long greenish-yellow. Stigma lobes about 17 green. Trichocereus taquimbalensis is a day-flowering species.
Fruit: Spherical or ovoid, about 2 cm in diameter, pale green with few small tubercles, 2-4 mm long with thick, long, white hairs.
Seeds: Small, 1.2 mm long, punctuate, shining dark brown.
Remarks. There is a variety var. wilkae that has four, more rounded, central spine. This variety grows around Tupiza, quite far away from the location of the type. [1] [2] [6].

Subspecies, varieties, forms and cultivars of plants belonging to the Echinopsis tacaquirensis group 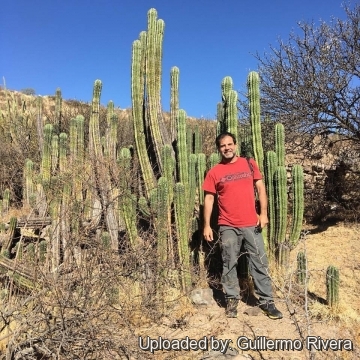 Trichocereus taquimbalensis forest west of Sucre Photo by: Guillermo Rivera
Send a photo of this plant.

Cultivation and Propagation: Echinopsis tacaquirensis subs. taquimbalensis is a pretty common cactus and can be found in collections throughout the world. It grows slowly and is moderately cold hardy, but make sure that it is not exposed to severe freezing temperatures, or it may die.
Soils: They need a well drained soil mix.
Waterings: Water regularly in summer but allow to dry fully before watering again. During the winter months they should be rather kept dry. Since they are big-sized plants, they need plenty of space for their roots. Repotting should be done every other year, or when the plant has outgrown its pot.
Exposure: Light shade when young, full sun later. In cultivation they prefer partial shade as they get sunburn pretty easily. If it get´s a severe sunburn, it can die pretty quickly.
Hardiness: Echinopsis tacaquirensis subs. taquimbalensis is a typical, cold hardy cactus species and can tolerate temperatures down to -5° Celsius for very short periods of time, but for safe cultivation overwinter it at temps of approximately 10° Celsius and completely dry. Wet soil is a killer and should be absolutely avoided.
Propagation: From stem cuttings (if available) in spring (let them dry till the ends callous well. Then replant them in fresh cactus soil that is ever so slightly moist, and keep it that way till they root) or preferably by seeds. Seeds should be sown in a well-drained soil mix. Surface sowing is the best. Seeds germinate in 14-28 days at 20° C .