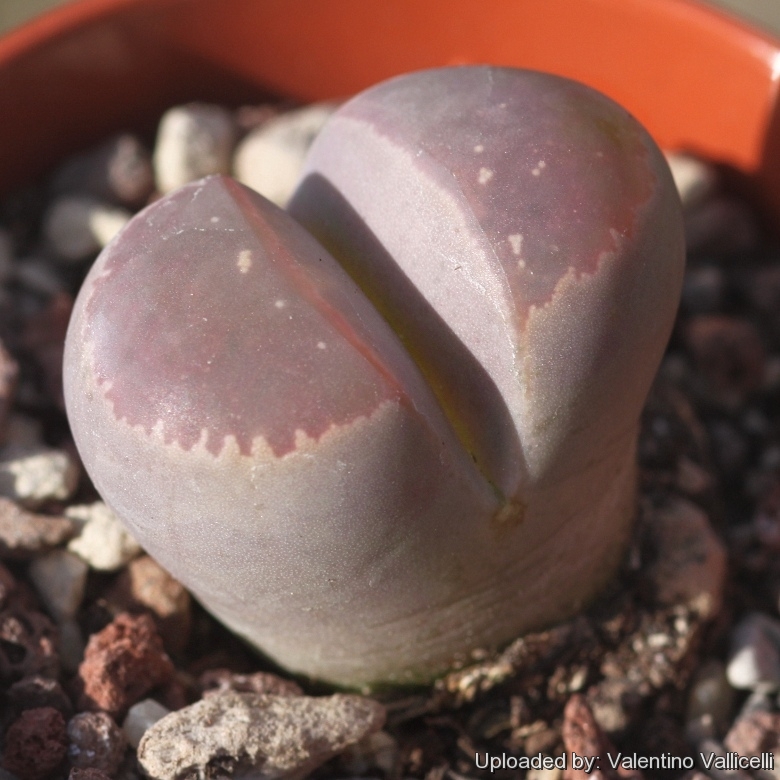 Origin and Habitat: Lithops olivacea var. nebrownii are restricted and occur sporadically in in a small area to the South West of Aggeneys and near Aggeneys, thus at the South West end of the range of the species.
Type locality: South West of Aggeneys.
Habitat: It is a quartz lover and will always be found growing either on big outcrops of quartz or more commonly on quartz plains where the quartz pebbles protect the plants from the blazing summer sun by reflecting a lot of the light and heat. Stones comprises transluscent white and red-stained quartzite; opaque white quartzite stained with pink, red or rose quartz and feldspar flecked with mica.
Ecology: Its hard translucent gloss closely resembles the white and red-stained quartz crystalline rubble of its habitat. Two succulent plant that are often found growing with Lithops olivacea var. nebrownii are Lithops julii subsp. fulleri anf Avonia papyracea, which loves quartz too. In times of drought the plants shrivel and are almost invisible, as they get covered with fine wind-blown sand. After rain, however, they absorb water and become fat and turgid. There is a considerable correlation between the colour of different populations and the nature of their habitats.

Description: Lithops olivacea var. nebrownii is a local or morphological form of Lithops olivacea which is more red-brown, green-brown in appearance and occurs at the South West end of the range of the species. Moreover var. nebrownii is slightly cordate in profile and usually has divergent fissures.
Habit: It is a tiny egg-shaped, geophyte succulent, usually forming clumps of 2 to 10 heads or sometime compact agglomerate with up to 30 or more usually less than 2 cm tall.
Bodies (Paired leaves): Up to 30 mm long and 20 mm broad at the fissure (but usually smaller). Leaves firm, tightly pressed together, fissure 6-12 mm deep, often slightly divergent, top of surface truncate to slightly convex, occasionally slightly concave or in the older stage strongly convex; window usually large, always shaped like a nail, of transluscent greenish brown, greyish pink or brownish green, usually with a distinctly deeper-hued (orange-brown) line along the inner margin and often also as a lining along the outer margins. As a rule in Lithops the margins show various degrees of indentation, but in L. olivacea, the inner margin is straight and plain and without markings, while the outer margin usually denticulate or rarely quite plain. Margins and islands various shades of opaque yellowish or pinkish beige, salmon, yellowish grey or pale apricot. Shoulders as for the margins, but usually greyer and duller.
Flowers: Diurnal, long lasting, yellow with white throats, up to 35 mm across, but usually less.
Blooming season: Late summer to mid autumn.
Fruits: Capsules mostly 5-chambered. Boat-shaped, top flat. Face elliptic, up to 9 by 7,5 mm.
Seeds: Yellow-brown, rugose.