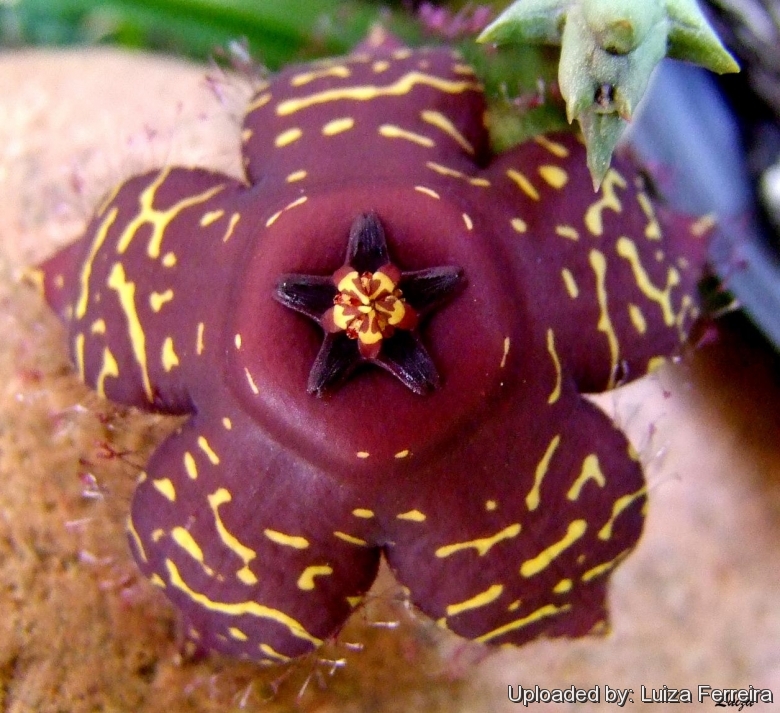 Description: Orbea doldii is a succulent, leafless perennial with noteworthy flowers to 5 cm across, the corolla is purple with bright yellow marking, and vibratile hairs along margins. The stems, stem teeth, inflorescence, pedicels, sepals, corolla, size, outer and inner corona characters are very closely with those of Orbea macloughlinii that grows in the same area where O. doldii was found. Only the different patterned corolla, the more marginal cilia on corolla lobe and a shallower saucer shaped annulus distinguish O. doldii from Orbea macloughlinii. However in O. macloughlinii the annulus varies from flat to raised well above the corolla (like in in the related Orbea speciosa), so the shallow annulus of O. doldii can also be accepted as within the normal range of variation of O. macloughlinii. Corolla markings can vary in the same species and can't be used as a differentiating character.

Subspecies, varieties, forms and cultivars of plants belonging to the Orbea macloughlinii group 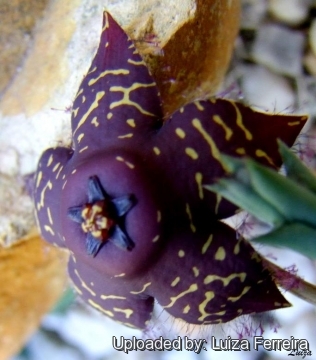 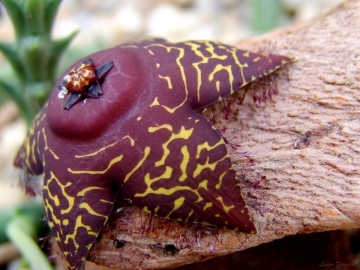 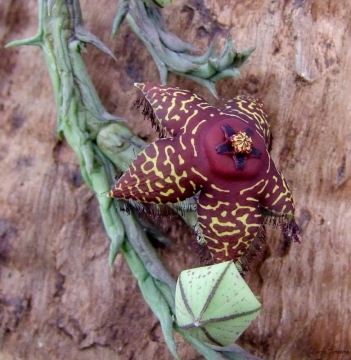 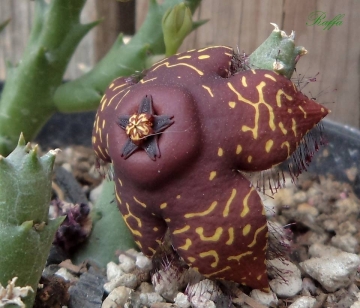 Cultivation and Propagation: Orbea doldii grow well in light gritty soil with a very liberal drainage. They should at all times sparingly watered (best rain water with some occasional fertiliser), and in winter time they hardly require any. They require outdoor culture, or a warm close greenhouse, while growing in the early part of summer, and afterwards may be ripened and kept in a greenhouse; but as they bloom chieﬂy in autumn, warmth is desirable to enable them to expand their ﬂowers.
A minimum winter temperature of 5-10°C is acceptable, providing that plants are kept absolutely dry. They prefer light shade rather than full sun, although stems may not colour up under shady conditions.
Propagation: Plants are usually increased by cuttings, which, as they are very succulent, should be allowed to dry a week after they are taken off, when they may at once be put singly into pots.
Pest & diseases: Keep their roots free of mealy bugs, as fungal attack often occurs as a result of damage to stems by insects. A layer of grit on the surface of the compost prevents moisture from accumulating around the base of the stems and minimise the chance of fungal attack on the roots.
Traditional uses: This species is sporadically collected for food by local people.