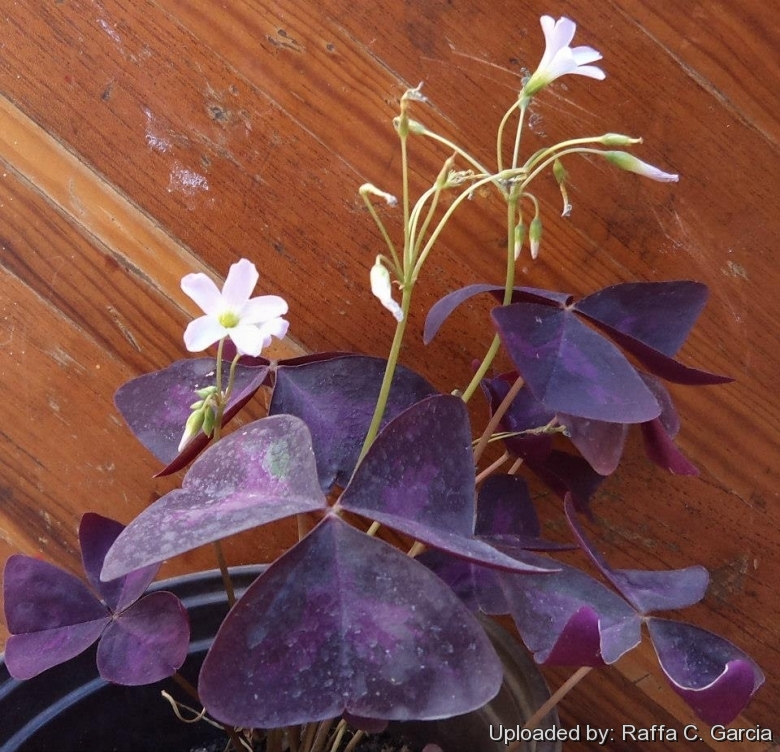 Origin and Habitat: Oxalis triangularis is native to South America (Argentina, Bolivia, Brazil, Paraguay, Peru?). Introduced in Florida and Louisiana.
Altitude range: 5 to 600 metres
Habitat and ecology: It grows naturally amongst rocks near streams, but easily naturalizes in disturbed sites, on the edge of woodland remnant and near gardens in subtropical and warm temperate areas.

Description: Oxalis triangularis, commonly called "Love Plant" or "Purple Shamrock", is an edible, perennial, acaulescent plant, arising from scale-clad rhizomes, growing to 20 cm tall. It is particularly priced for its purple, triangular leaflets that close at night. O. triangularis can be divided by morphological characters into 2 subspecies closely sympatric over much of their native ranges: subsp. triangularis and subs. papilionacea. However the differences are minimal and it seems probable that only a single evolutionary entity exists. Forms of O. triangularis are sometimes recognized as “atropurpurea” but this apparently is a horticultural name.
Rhizome: Short, branching, up to 5 cm long and 15mm wide, covered with thickened, overlapping scales, and juicy, sometimes with a cluster of bulblets at the rhizome base, rarely without leaves; rhizome and bulb scales (1–)3-nerved, glandular along the margins.
Leaves: All basal leaflets 3, obtriangular to obovate-triangular, (20–)30–50(–60) mm, lobed ca 1/10 length or apex merely notched, lobes apically truncate to slightly convex, dark purple on both surfaces, commonly with lighter violet splotches adaxially, radiating from the midvein, oxalate deposits absent or as short, filiform, marginal lines on both sides of the notch, petioles 12–20 cm. The leaves of O. triangularis move in response to light levels, opening in high ambient light (in the day) and closing at low light levels (at night). This movement is not due to growth and is instead powered by changes in turgor pressure in cells at the base of the leaf. It is an example of photonasty.
Inflorescence (umbelliform cymes): (1–)2–5(–9) flowerd, heterostylous. Scapes 15–35 cm.
Flowers. Hermaphrodite (having both male and female organs) pollinated by Insects. Sepal apices with a pair of orange tubercles. Petals 15–22 mm, white to pinkish or pale purple.
Blooming season: It is in flower from April to May occasionally to September.
Fruits (capsules): Ovoid-ellipsoid, 12–18 mm.

Subspecies, varieties, forms and cultivars of plants belonging to the Oxalis triangularis group 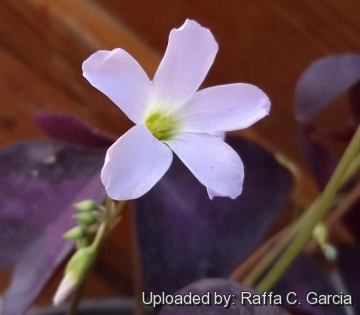 Oxalis triangularis Photo by: Raffa C. Garcia
Send a photo of this plant.

Cultivation and Propagation: Oxalis triangularis, is typically grown as a houseplant but can be grown outside in warm areas preferably in light shade.
Soil: It grows in light (sandy) and medium (loamy) but well-drained soil. Suitable both for acid, neutral and basic (alkaline) soils. It adapts in both dry and moist soil. Pot cultivated plants need average potting soil with good drainage.
Moisture requirements: Water regularly during the active growing season, but allow the surface soil to dry out between waterings.
Exposure: It can grow in semi-shade (light woodland) or no shade.
Hardiness: It is frost tender (USDA climate zones 8a–11). Indoor it requires a cool indoor temperature of about 15 degrees celsius. It can tolerate higher indoor temperatures but will go into dormancy prematurely and/or begin to take on a "tired" appearance if temperatures go above 27 degrees Celsius for prolonged periods of time.
Wind tolerance: The plant can tolerates strong winds but not maritime exposure.
Maintenance: Mature plants are cut back to the soil every 3–5 years in early summer or during the dormancy period. Young plants are cut back to the soil every year in early summer or during the dormancy period, until they reach maturity.
Edible Uses: Leaves have a pleasant acid flavour and may be eaten raw or cooked. The are a pleasant and decorative addition to the salad bowl. Most children really adore eating the flowers raw. The root is juicy with a pleasant sweet mild flavour and can be eaten raw or cooked. The leaves contain oxalic acid, which gives them their sharp flavour. Perfectly all right in small quantities, the leaves should not be eaten in large amounts since oxalic acid can bind up the body's supply of calcium leading to nutritional deficiency. The quantity of oxalic acid will be reduced if the leaves are cooked. People with a tendency to rheumatism, arthritis, gout, kidney stones or hyperacidity should take especial caution if including this plant in their diet since it can aggravate their condition.
Pest and diseases. Fungal leaf spots, powdery mildew, rust, and seed smut are the most common problems, but also watch for spider mites and leaf miners.
Propagation: Sow fresh seed or divide rhizomes. Oxalis triangularis are plants that grow from bulbs, and their propagation is done by division of the bulbs. Like other bulbs, the oxalis go through dormancy periods on a regular basis; at the end of such period, the bulbs can be unearthed, sidebulbs cut and replanted in appropriate soil, where they will grow into new plants.