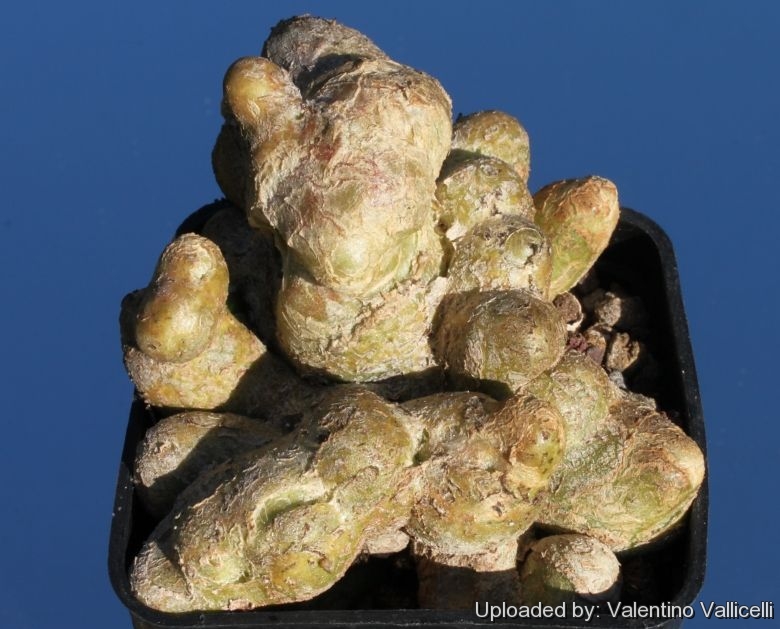 Description: This plant is very different from a normal Mammillaria duwei, it reveal its true identity only when an occasional normal areole produces a tuft of white feathery spines. It is thought by some that it is nothing else than a monstrous root grafted upside down, in fact it produces easily adventitious roots in any part of its body. It forms large low clusters of hard, corky-textured creamy-brownish, greenish and pinkish fissured protuberances, some only a few centimetres across. The plant looks more like some non-cactus succulent or rocky material than a cactus. This cultivar shows many growing variations, with different crested and monstrous shapes.

Notes: This plant is a monstrous root that sometime produces normal roots and normal areoles. But extraordinarily it produces viable somatic embryos. Somatic embryogenesis is a phenomenon observed during plant tissue culture, some of the somatic cells start behaving like the embryonic cells. They form the embryos which are not formed due to fusion of gametes. So they are called as somatic embryos. The formation of complete embryo from these cells is called as somatic embryo genesis. It is very rare to see such a phenomenon in a living plant out of a laboratory. 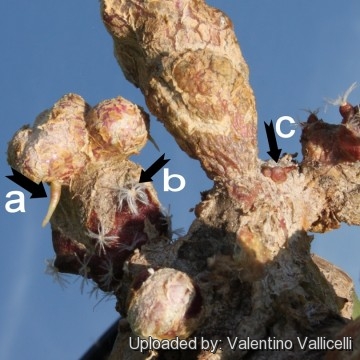 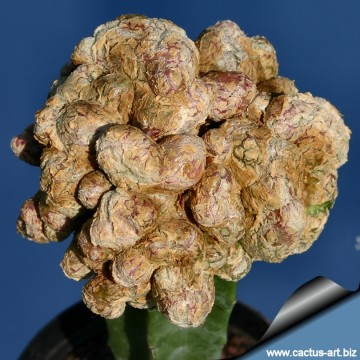 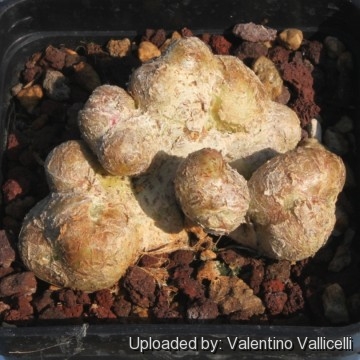 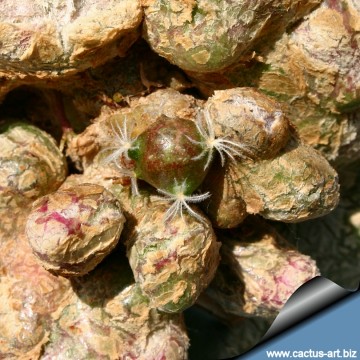 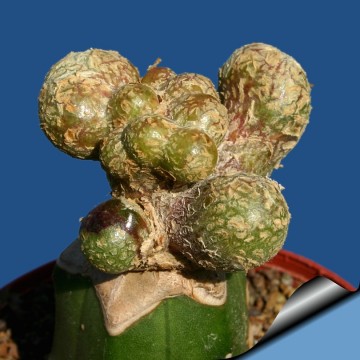 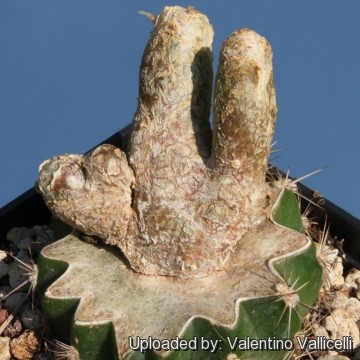 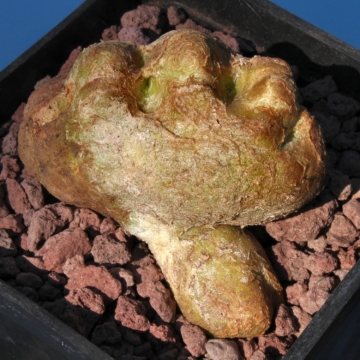 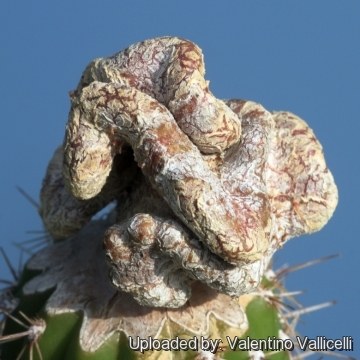 Cultivation and Propagation: Mammillaria crinita subs. duwei f. monstruosa is almost always seen grafted on a stronger stock, but seems it can grows well on its own roots too. The plants on their roots are quite difficult to grow long enough to produce clumps as it is very rot sensitive and needs lots of light with ample airflow.
Growth rate: It is a small growing.
Soils: It likes very porous standard cactus mix soil with little organic matter (peat, humus).
Repotting: Repotting every 2-3 years. It will need a pot with sufficient depth to allow the tap root. As it is especially prone to rot under-pot in a smaller container filled with very porous compost. Use pot with good drainage.
Watering: Water regularly in summer, but do not overwater (very wet-sensitively, especially in light of its succulent root system). Its roots are easily lost in pots that stay damp for any length of time. Keep dry with ample airflow in winter. In the rest period no high atmospheric humidity!!
Fertilization: During the growing season enrich the soil using a fertilizer rich in potassium and phosphorous, but poor in nitrogen, because this chemical element doesn’t help the development of succulent plants, making them too soft and full of water.
Hardiness: Reputedly sensitive to frost , but less so if kept on the dry side prior to, and during, cold weather (hardy to -5° C for short periods). However some warmth throughout the year will increase the grower's success (minimum 5° to 8°C during rest season).
Exposition: Outside filtered sunlight or afternoon shade, inside it needs bright light, and some direct sun. Subject to sunburn if exposed to direct sun for too long.
Uses: It is an excellent plant for container growing. It always looks good and stays small. It look fine in a cold greenhouse and frame.
Pests & diseases: It may be attractive to a variety of insects, but plants in good condition should be nearly pest-free, particularly if they are grown in a mineral potting-mix, with good exposure and ventilation. Nonetheless, there are several pests to watch for:
- Red spiders: Sensitive to red spider mite. Overhead watering is helpful in controlling mites.
- Mealy bugs: Easily they develop aerial into the new growth with disfiguring results, but the worst types develop underground on the roots and are invisible except by their effects.
- Sciara Flies: they are one of the major problems for seedlings. It is a good practice to mulch your seedlings with a layer of grit, which will strongly discourage the flies.
- Scales: they are rarely a problem.
It is wise to treat your whole collection with a systemic insecticide twice a year in spring and autumn.
- Rot: it is only a minor problem with mammillaria if the plants are watered and “aired” correctly. If they are not, fungicides won't help all that much.
Propagation: Graftingt or (rarely) cuttings. Cuttings of healthy shoots can be taken in the spring and summer. Cut the stem with a sharp, sterile knife, leave the cutting in a warm, dry place for a week or weeks (depending on how thick the cutting is) until a callus forms over the wound. Once the callus forms, the cutting may be inserted in a container filled with firmed cactus potting mix topped with a surface layer of coarse grit. They should be placed in the coarse grit only; this prevents the cut end from becoming too wet and allows the roots to penetrate the rich compost underneath. The cuttings should root in 2 to 6 weeks.