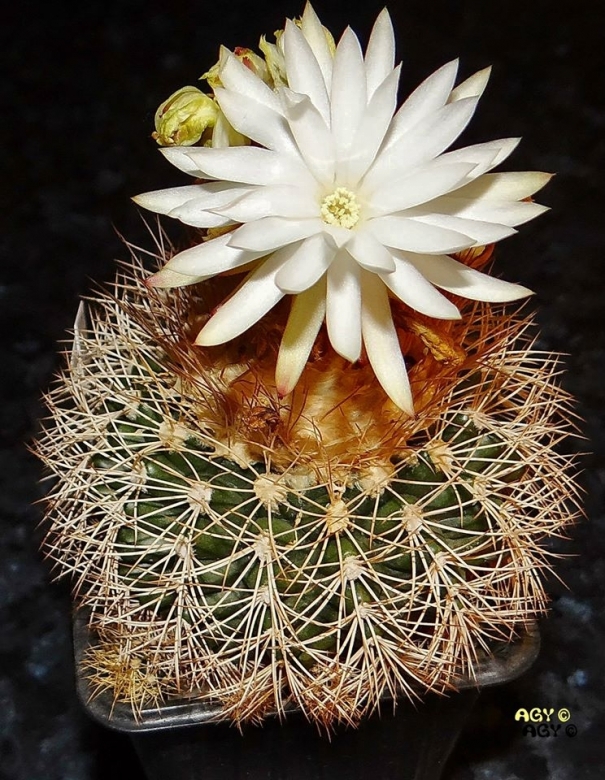 Origin and Habitat: Geographic coordinates 11º 29 'S and 41 ° 20' W and 11º 28 'S 41º 22' W in the Morro do Chapéu municipality, Chapada Diamantina, Bahia, Brazil. Plants are scattered in spotted population, individuals have varying degrees of aggregation and apparent spatial structure.
Altitude range: The altitude ranges between 700 and 900 meters and slopes between 2 and 9 degrees.
Habitat and origin: Discocactus zehntneri subs. boomianus grows in tropical semi-arid region with hot summers where it forms large clusters, and usually it is found growing on sandstone outcrops in sandy terrain together with low size xerophytic flora. Annual average temperatures ranges from 20 to 22 ° C and annual rainfall from 600 to 700 mm. This species presents both sexual and asexual reproductive systems. Plants offsets from the base to form little clusters, the sprouts remain attached close to the mother plants, but after some time most of them start producing roots becoming fully independent, and mingle with seed-grown individuals, which are also heavily concentrated around the mother plants, due to the dispersion pattern of its seeds. This night-blooming species is pollinated by hawkmoths and Coleoptera.

Description: Discocactus zehntneri subs. boomianus (firstly described as Discocactus boomianus by Buining & Bredero in 1971) is a more or less distinct subspecies of the variable Discocactus zehntneri. It is spiner than the type subspecies, with more thinner spines in each areole completely covering the body. But still more importantly, this subspecies has tuberous roots, which D. zehntneri lacks. In Discocactus, tuberous roots are otherwise only found in Discocactus bahiensis and in the newly described Discocactus petr-halfari. Discocactus zehntneri subs. boomianus has dark tipped yellowish spines, small body, ribs broken up in tubercles, and red fruits, and eventually offsets from the base to form little clusters, and produces in culture just as many offsets as Discocactus araneispinus). Mature individuals possess a small cephalium, a structure formed by trichomes (woolly hairs) from which emerge the tubular, white, sweetly scented flowers.
Derivation of specific name: boomianus For Dr. Boudewijn K. Boom (1903–1980), Dutch horticultural botanist at Wageningen University.
Areoles: Oval. About 9-10 per ribs in plants with cephalium.
Stem: Up to 6(-8) cm tall and 10(-14) cm wide, green to dark green, with 16-20 bumpy ribs.
Radial spines: 10 to 14, more or less arranged in comb-formation, recurved backwards to the plant, at first yellow to light brown, darker tipped, later greyish, ca. 3 cm long.
Central spines: Absent, occasionally 1 , up to 3.5-4 cm long. On the top of the plant the central spines are longer and upright.
Cephalium: Creamy-white, grayish/white to very pale brownish.
Flowers: Night- blooming, white, 9 cm long. The position of the stigma is half-way up the secondary stamens.
Fruits (Berries): Indehiscent ranging from bright red to white. The fruits have an average of 118 (± 45) seeds.
Seeds: Globular tuberculate, ca.1.34 mm wide, 1.48 mm high, and 1,15mm thick. 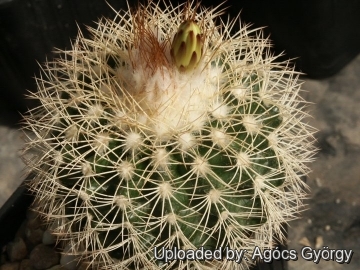 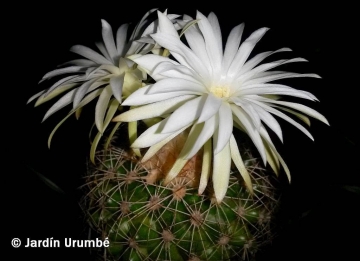 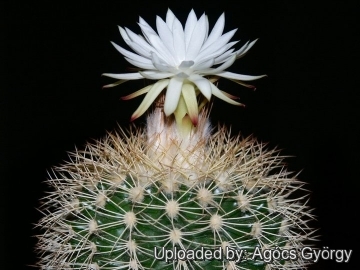 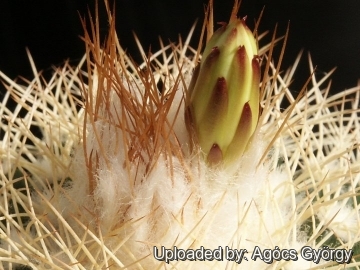 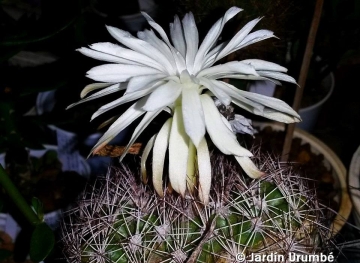 Cultivation and Propagation: Discocactus zehntneri subs. boomianus is one of the easiest species of the genus to grow, but even so it isn't a plants for beginners, in fact collectors consider the Discocactus to be rarities with requires skilful cultivation. it is rather difficult to grow and frost tender, it can’t stand cold, or even fairly cool temperatures and should be kept at above 15° C if grown on its own roots (8°C if grafted). Need full sun or afternoon shade. They are slow growing and very rot prone when kept on their own roots and though they can’t endure long stretches of total dryness, too much water will rot them, as their weak root systems tend to be inefficient at sucking up water from wet soil. They generally resent being repotted and can take a long time to establish. When grown to maturity, however, it possess an exotic look shared by no other cacti, and it generally attract a lot of attention.
Propagation: Seed or cuttings. Young seedlings are generally grafted on a low stock to keep the plant in a good shape.