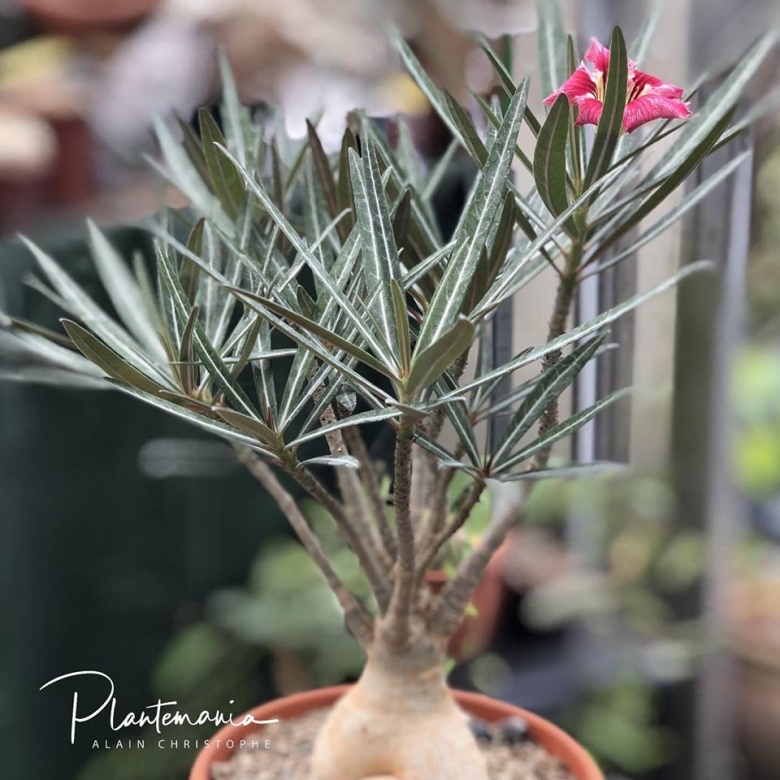 Description: Adenium somalense var. crispum, described by Emilio Chiovenda, is a dwarf, more compact variety of Adenium somalens with distinctive flowers and a large underground caudex for the plant size. The flowers are white with quilled petals heavily striped with red or completely red. They are often sold as "Adenium crispum". This species is notoriously slow growing. A. somalense var. crispum is very different from the treelike nominate variety and intergrades with Adenium obesum. Interesting marbled foliage and compact growth make this an attractive plant even when totally vegetative. It is very different from most other Adeniums.
Caudex: In nature the caudex is subterranean (just below the soil surface), fusiform or napiform (turnip-shaped). Most of the thin roots of this species originate from the upper part of the caudex nearly at ground level, very unlike the arborescent Adenium somalens thick, succulent roots that radiate from the base of the larger, above-ground caudex. In cultivation the caudex is often raised above soil level.
Stem: The few above-ground branches are thin, erect to ascending, hardly succulent, and seldom more than 30 cm tall
Leaves: Long narrowly linear, reddish green with prominent white midrib and veins with silvery highlight, usually strongly crisped (wavy-margined).
Flowers. Small, but very elegant and distinctive. Compared to the arborescent variety, they have larger throats, narrower, white to pinkish petals twisted and curled and heavily striped with red or completely red. Throat cream with bold red lines. The margins of the squarish petals are often curled downward (quilled). Nevertheless it is quite variable some clones have flat petals, while some have solid red petals.
Blooming season: A. somalense var. crispum flowers occasionally through the year, but more profusely during winter dormancy. Seedlings can flower in less than two years when only 15 cm tall. 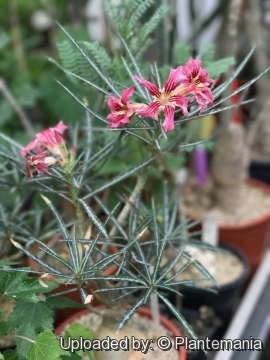 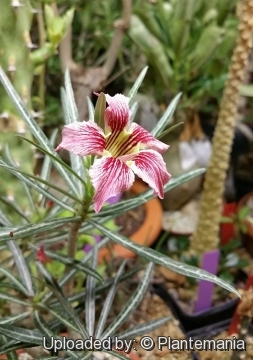 Cultivation and Propagation: Originally from arid regions, Adenium somalense var. crispum is as sensitive to cold as Adenium somalense, and is also intolerant of hot, humid conditions. For these reasons it is not widely cultivated despite the beautiful flowers and compact size. The caudex can be exposed above the potting medium to create charismatic bonsai-like tree (the base can produce roots in cultivation). Most of the root system arises from near the top of this caudex; fortunately the caudex is capable of rerooting from the bottom. It is nearly evergreen if grown in a warm greenhouse or tropical conditions a and watered, but can loose its leaves and forced into a long winter dormancy in cooler climate. New growth begins early in spring. Outdoors it thrives on a xeric watering regime as required by cacti. Under ideal conditions, it can live for hundreds of years.
Growth rate: The variety crispum grows slowly in cultivation; it takes about five years to produce a specimen with its characteristic, though still small, caudex.
Pots and soils: It like pots with generous drain holes on sides and bottom, need a very porous potting medium media (add pumice, vulcanite, perlite, sand or brick chips into regular soil, or a cactus mix) seeing that the main trunk is planted with the majority of the roots below the caudex line.
Fertilization: To make plants develop a large swollen base/trunk and to increase flowering, they require a fertilizer rich in potassium, phosphorus and micronutrient without a too high nitrogen content. Fertilize regularly while the plant is growing.
Exposition: Bright filtered light is best but in areas where light is not as burning, plants may be kept outdoors in full sun unprotected but remember that caudex is very susceptible to sun scalding. Plant becomes leggy in the shade and its flowering reduced.
Water: Water plants preferably in the early mornings until the soil is well wetted and let excess water drains from the pot base. Watering can be done as they become drier during active growth season. Never allow plants to dry out too often as this causes them to go into early dormancy. Many plants simply never get enough water to grow and flower adequately so keep them active and growing by providing them with all the essential necessities. Water sparingly during winter months.
Drought Tolerance: High.
Hardiness: It is frost sensitive and cannot endure freezing temperatures (U.S.D.A. Zone: 10a-12). If temperatures regularly fall below 10° C, the plant should be grown in a container for moving into a cold protected area. Partial defoliation may also occur at other times in response to weather change. As an indoor plant ensures a minimum temperature in winter of 10 °C. Where year-round temperature is sufficiently warm, desert rose will not become dormant and deciduous and may be ever-blooming.
Salt Tolerance: Medium
Maintenance: They should be re-potted frequently until they attain their desired size.
Uses: Specimen plant; patio; flowering container plant; Bonsai, rock gardens, pool side.
Pests & diseases: Occasional aphids, mealybugs, scales and leaf spots. It is especially susceptible to spider mite infestation.
Warning: All parts of Desert Rose are potentially very poisonous and should be kept out of reach of children and animals. It must be handled with care. avoiding direct contact by always using gloves or covering your hands with plastic bags when handling it.
Propagation: Seed, grafting or cuttings. Seeds are placed on the surface of the soil mixture for germination. Seeds germinate easily, and seedlings grow without any special attention. Seedlings are also grown as the rootstock for grafted plants. The numerous hybrids are propagated mainly by grafting on to seedling rootstock. While plants grown from seed are more likely to have the swollen caudex at a young age, with time many cutting-grown plants cannot be distinguished from seedlings. Propagation by cutting is also possible, cut end shoots and let dry for a day or two. Be careful of the toxic sap. Stick shoots into a pot of moist soil, and provide bottom heat. Keep soil moist. The best time for either method is in the spring. A grafted adenium, can become gigantic more than 2 meters tall in just 5 years.