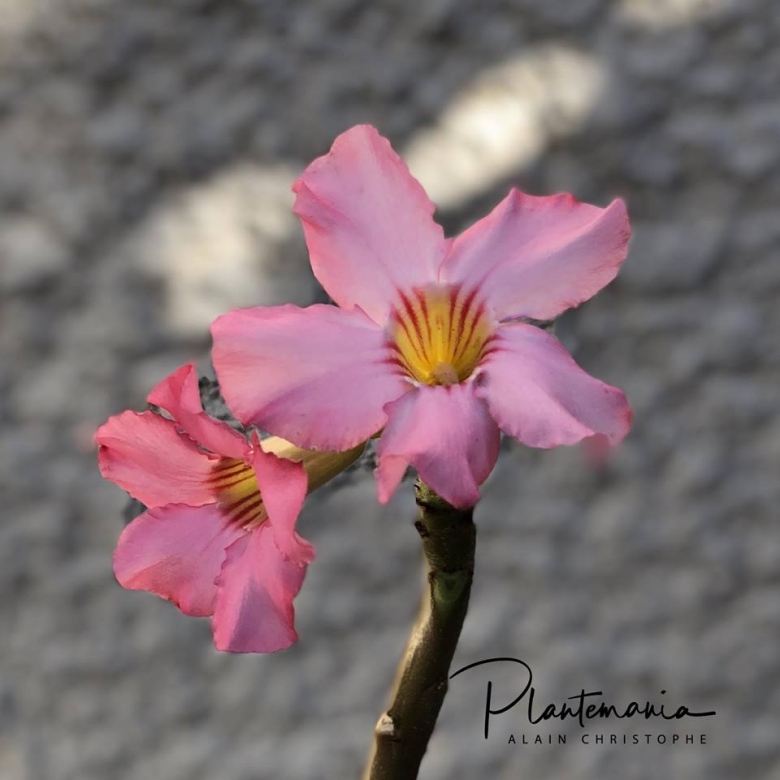 Origin and Habitat: Adenium dhofarense is endemic to the Dhofar coast (Oman) and adjacent mountains of Yemen. (Arabian Peninsula)
Altitude range: Around 960 metres above sea level.
Habitat and ecology: Tropical woodland. Adenium dhofarense is in leaf for about three months in summer, when its habitat is bathed in almost continuous heavy mist from the edge of the Asian monsoon. The rest of the year is hot and dry. The huge leaves appear in mid summer and fall off by late autumn.

Description: Adenium dhofarense is a local or morphological form of Adenium obesum, but commonly used to be know as a separate species. It is a succulent shrub or shrubby tree up to 3 m high, the shape resembling a dwarf baobab. The stems arise from a large thickened rootstock and have peculiar characteristics that reflect the harsh environment in which it lives. A. dhofarense forms one of the nicest caudex of the genus, and each individual plant is unique in it own right. However some common characteristics have been highlighted: some plants are tree-like up to 3 m tall with a densely branched crown; other plants have long branches, even up to 3 meters long, forming a large crown that usually branches from a single robust root. Most of the plants, however, are 1-1,5 m tall and have an irregular globose crown, surmounted by a few often long branches. A characteristic often observed in the species is the ability of some of the longest branches to produce roots at the point where they touch the ground and thus give rise to a new plant. It has extremely large, leathery and glossy leaves with more substance than those of most other adeniums and very small flowers that are usually produced when the plants are leafless. It grows very slowly.
Stems: Branches are often decumbent to trailing and tend to root when they touch the ground.
Flowers: Very small pink, produced in one brief flush in early summer, just before the plants leaf out.

Adenium dhofarense Photo by: © Plantemania
Send a photo of this plant.

The gallery now contains thousands of pictures, however it is possible to do even more. We are, of course, seeking photos of species not yet shown in the gallery but not only that, we are also looking for better pictures than those already present. Read More...
Cite this page: "Adenium dhofarense" Text available under a CC-BY-SA Creative Commons Attribution License. www.llifle.com 14 Nov. 2005. 01 Dec 2022. </Encyclopedia/SUCCULENTS/Family/Apocynaceae/35392/Adenium_dhofarense>