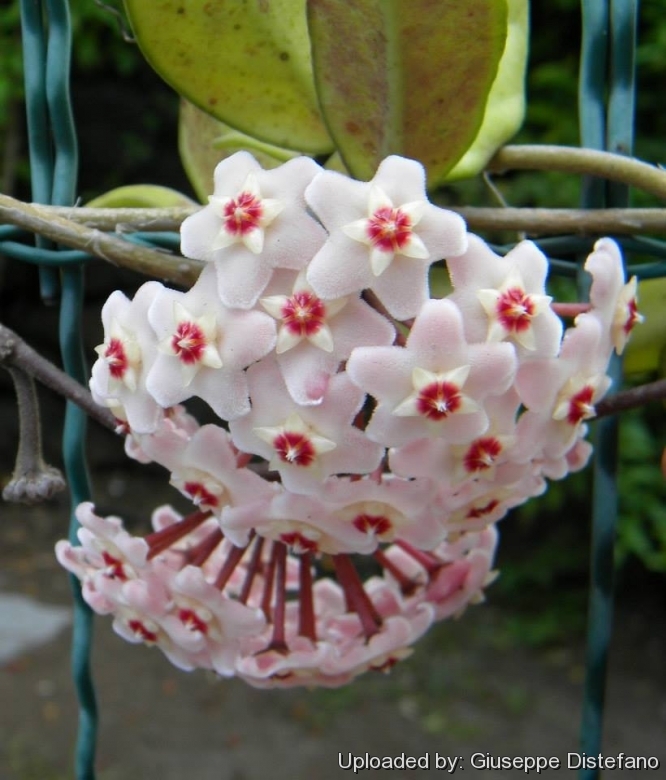 Origin and Habitat: Eastern Asia, the Pacific islands and Australia.
habitat: Hoya carnosa grows in lowland tropical and subtropical rain forest and hangs high in the trees and is semi-epiphytic. It is partially parasitical, its roots penetrating the bark of the trees which support.

Description: Hoya carnosa, the wax plant, is a popular house plant grown for its attractive glossy foliage, and sweetly scented flesh coloured flowers so exactly resembling wax, that you might almost make it into candles. It is mesmerizing not only because of its fragrance and waxy appearance but also because of the fact that each flower looks like a five-pointed star and the cluster of flowers also arranges itself in a star shape. H. carnosa has been in cultivation for more than 200 years and has given rise to numerous named cultivars, e.g. showing leaves spotted with silver-grey or leaves variegated with gold, or irregularly undulate leaves.
Habit: It is an evergreen, epiphytic, CAM, shrubby climbers up to 6 metres hight.
Stems: Weakly succulent, pale grey, smooth, glabrous.
Leaves: Petiole 1-1,5 cm long, lamina broadly ovate-cordate, ovate or ovate-elongate, 3,5-13 cm long, 3-5 cm broad, thick, fleshy, obtuse or acuminate, base rounded to slightly cordate.
Inflorescence: Up to 30-flowered, pendent or somewhat erect; peduncle to 4 cm long. Inflorescences are born in the axils of the leaves from specialized perennial structures referred to as spurs (flowers may not be produced when the spurs first appear, but in time buds emerge from the tips. Each season new flowers are produced on these same spurs, so they should not be damaged or removed).
Flowers: The flower shape is typical of hoya plants, small, flat, star-shaped. Each small flower is made up of two stars, one on top of the other. The so called bottom star (corolla) is larger in size than the upper centered star which is termed the corona. Pedicels 2 - 4 cm, reddish, pubescent. Sepals elongate; Corolla 1,5-2 cm in diameter, fleshy, creamy-white, but may vary from near-white to dark pink. Corolla-lobes broadly ovate or triangular, margin revolute, inside covered in tiny hairs giving a fuzzy sheen to them. Corona white; corona-lobes ovate-lanceolate, upper face convex, outer appendage acute, inner appendage acute, reddish. The flowers are heavily scented and may produce a drop of nectar hanging from each petal.
Blooming: Flower usually blooms in early summer.
Fruits: Fusiform, 6-10 cm long, 5-15 mm in diameter.
Seeds: Narrow, tuft of hsirs 2,5 cm. 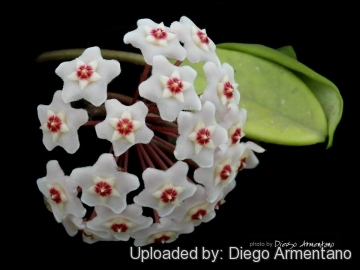 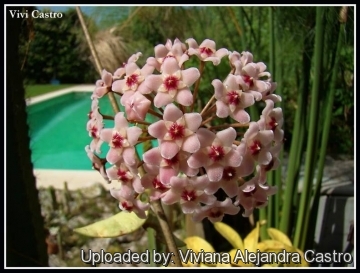 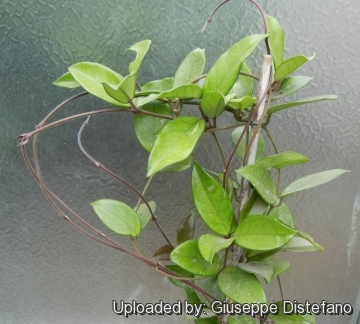 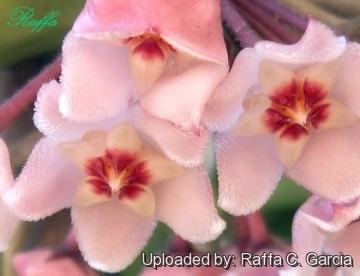 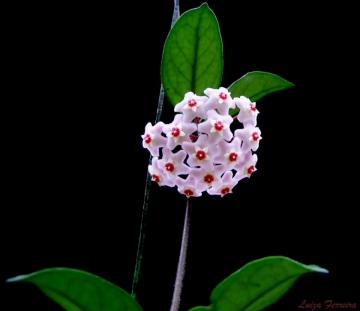 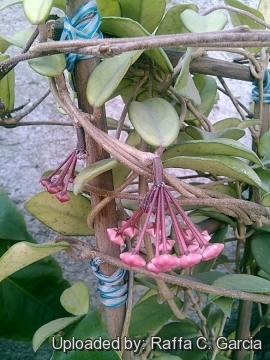 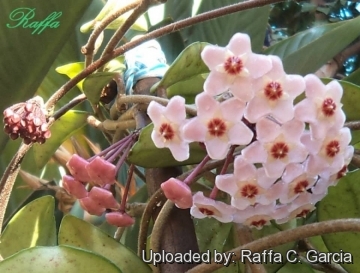 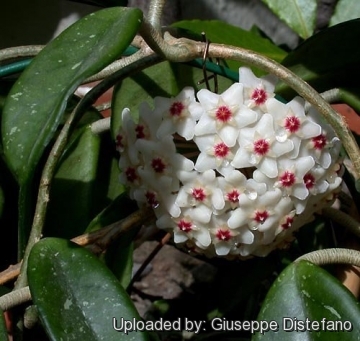