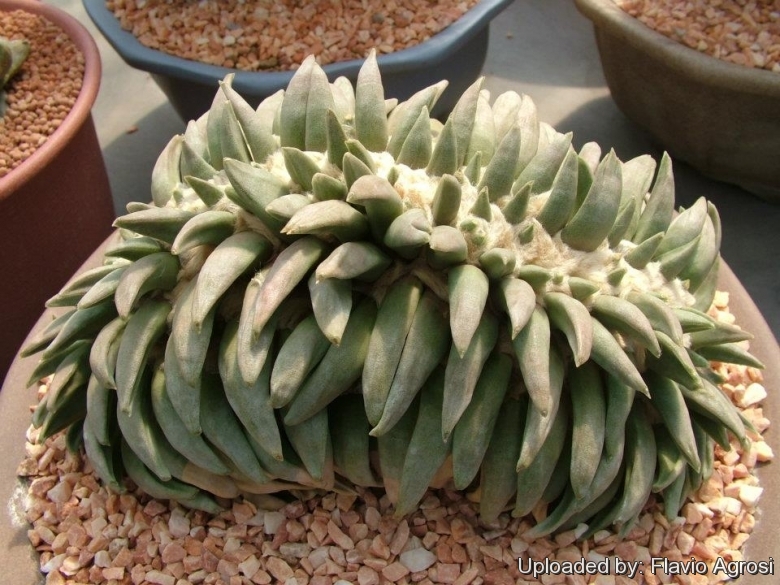 Origin and Habitat: The natural species is widely distributed in Mesico from north of Saltillo, Coahuila southwards to San Luis Potosi. Also found in Tamaulipas, Zacatecas and Nuevo Leon.

Description: Ariocarpus retususus commonly known as the "Star Rock" is one of the largest species that distinguishes for the fat triangular tubercles forming a starry rosette. It is a widespread and extremely variable plant. Tubercle size and shape vary widely, a terminal areole is sometimes present at the tip.
Crested form: The crested Star Rock (Ariocarpus retusus f. cristata) is a very rare, slow-growing and highly priced crested cactus forming odd sculptural shapes. Its stems fan out and can get very big making a spectacular specimen. The crested form - despite to its beauty - is still very rare, pricey and sought after by collectors.
Habit: Solitary, slow growing geophyte cactus with tubercles slightly projecting above ground level. The tuberous body is mostly below the soil.
Stem: Grey, or blue-green, fan shaped that will slowly forms brain-shaped cushion that can reach a considerable size (up to 3-12 cm high and 70 cm in diameter, or more).
Tubercles: Leaf-like, divergent, erect, basally compressed, usually becoming attenuate at the apices, convex or nearly flattened adaxially and often with shallow adaxial undulations or wrinkling, not fissured, 1,5-4 cm long, 1-3,5 cm wide, nearly as wide as long.
Areoles: At the tips of the tubercles, rounded, 1-5 mm in diameter often only on younger specimens.
Flowers: Diurnal 4-5cm in diameter, 2-4,2 cm long, white to pink (or magenta), occasionally with reddish midribs.
Roots: Tap root.
Flowering time: Autumn.
Fruits: White, green, or rarely pinkish, 10-25 mm long, 3-10 mm in diameter.
Remarks: All of the Ariocarpus seedlings are spiny and quite different from adult specimens, though the spines are feather-like. 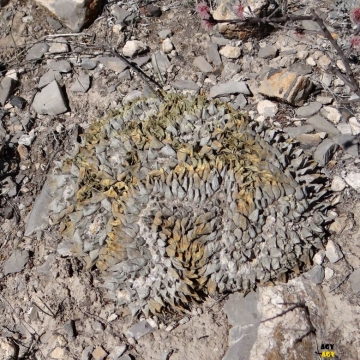 A natural occourring specimen in mexico. Photo by: Agócs György 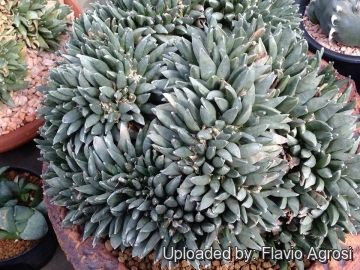 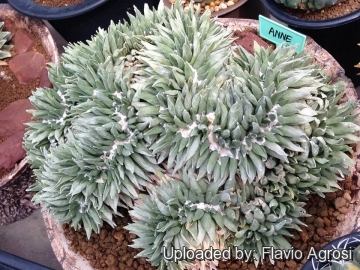 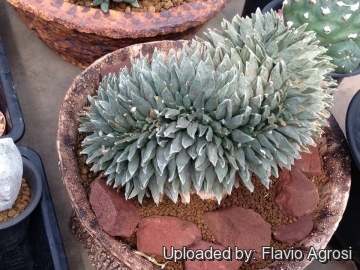 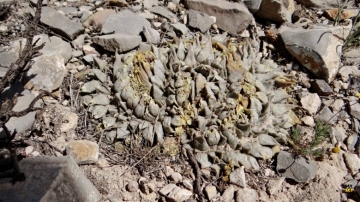