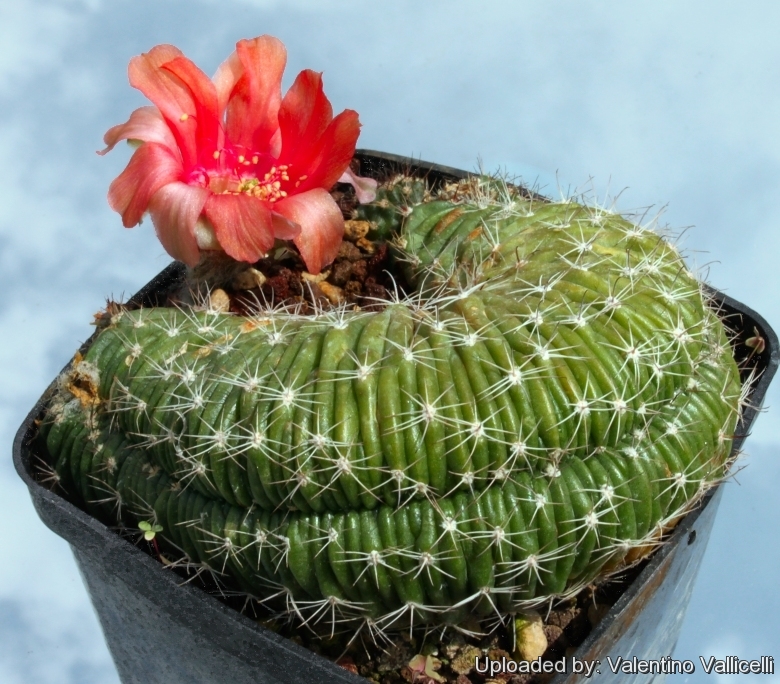 Description: The typical Echinopsis pentlandii, better known as Lobivia pentlandii, is a pretty little species, with a dark green body and flowers coming in wide range of colours. The beautiful crested form is highly priced for its sculptural shape and easy flowering habit. Older crested plant can reach a considerable size (up to 30 cm tall and in diameter).
*Stems: Fan-shaped 4-6 cm thick, dark-green from which spines emerge.
Ribs: Sarp edged, broken into long acute, hatchet-shaped, tubercles, separated by acute intervals.
Areoles: Felted about less than 2 cm apart.
Spines: Variable, all radial or sometime with one central, often difficult to distinguish as centrals and radials, brownish. Usually less than 3 cm long, but sometime longer (depending on clones and growing conditions).
Flowers: Diurnal, funnel shaped, variously coloured (Pink to reddish-brown, orange or yellow with a usual clearer centre ), up to 6 cm long, 5 cm diameter. Tube relatively stout up to 1 cm in diameter. Inner perianth-segments, narrowly obovate, abruptly acute, spreading. Scales on ovary and flower-tube lanceolate with short-hairs in their axils.
Blooming season: Blooms are produced in spring and remain open for about three days. 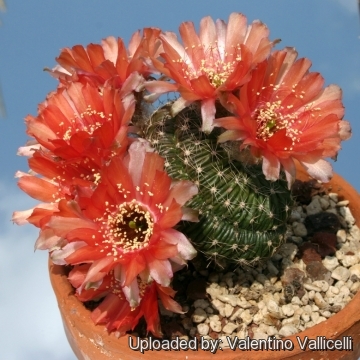 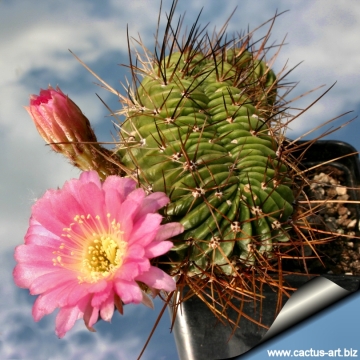 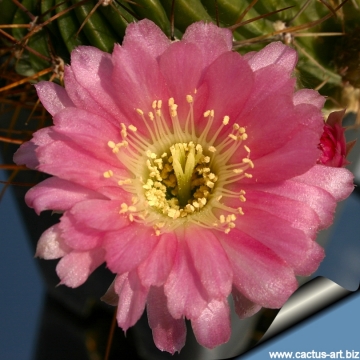 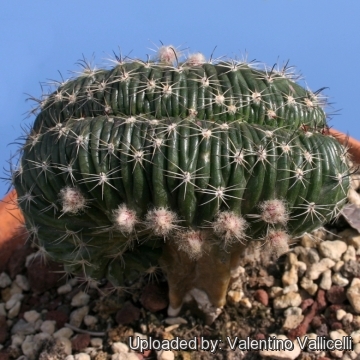 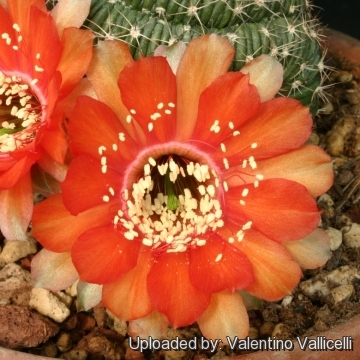 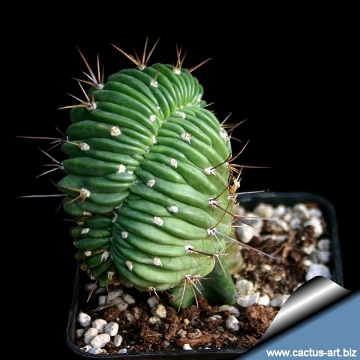 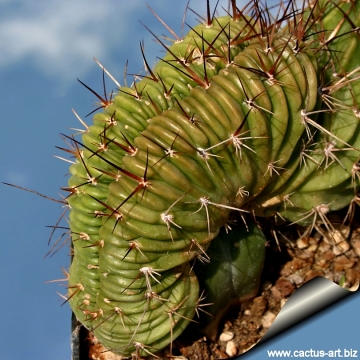 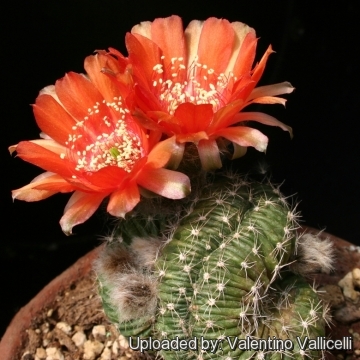 Cultivation and Propagation: This is a a much decorative frost hardy cactus easily found in cultivation. It is a summer grower species that offers no cultivation difficulties.
Soil: Use a very a particularly draining substratum, as it is very sensitive to rottenness when in presence of humidity and low temperatures and let the soil dry out between waterings, since it's natural habitat is in volcanic soil, it has adapted to more acidic conditions.
Repotting: Repot in the spring, when their roots become cramped. Generally, they should be repotted every other year in order to provide fresh soil. After repotting, do not water for a week or more. Needs a large pot to accommodate a large root system.
Water: In summer, during the vegetative period, it must be regularly watered, but allowing the substratum to completely dry up before irrigating again (but do not overwater ); in winter, it’s to be kept dry. Preferable not to water on overcast days, humid days or cold winter days.
Hardiness: It is a quite frost resistant cactus, hardy to -5° C (- 10° C if very dry). However in cultivation it is better not to expose it to temperatures lower than -0° C, even if in an aerated and protected location, in order to avoid the formation of anti-aesthetic spots on the epidermis. In presence of high atmospheric humidity avoid any frost as it is particularly sensitive to root rot.
Exposure: Outside full sun or afternoon shade, inside needs bright light, and some direct sun, but, as a former mountain dweller, does not care for extremely high temperatures in summer.
Use: It is suitable for small “desert” gardens, in association with other xerophytes. Where the open air cultivation is not possible due to the climate, it is to be cultivated in pot in order to shelter it in winter.
Propagation: By grafting and by cuttings, provided left drying up well, in summer.