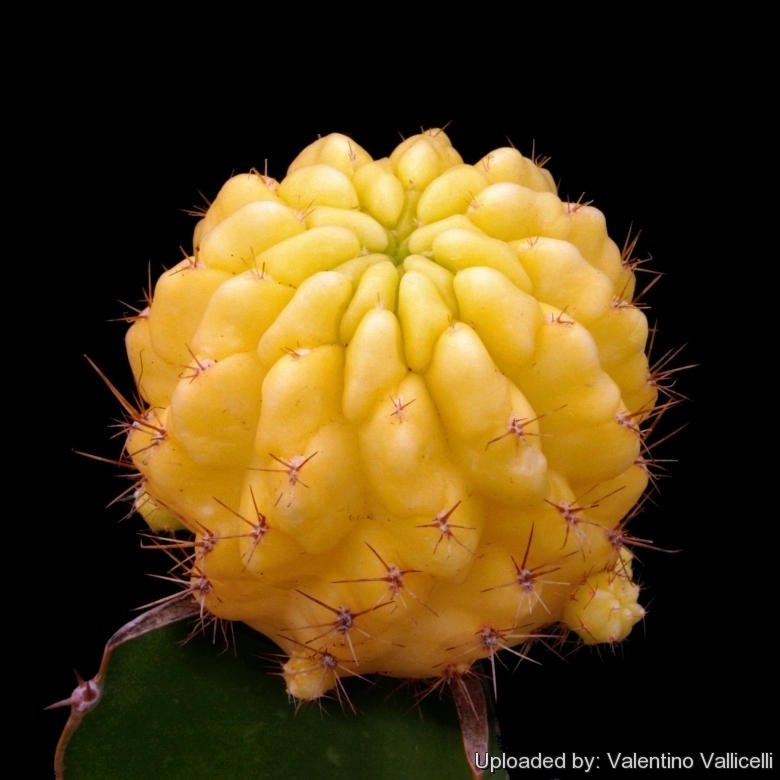 Description: Echinopsis pentlandii cv. Yellow (forma albinica), is a chlorophyll-less mutant with distinctive bright yellow stems, it is unable to produce protochlorophyll or chlorophyll. Albinism is a genetic aberration where there is a total absence of pigments. An "albinos" plant therefore is one with no pigment whatsoever, it will have totally white or cream stems or leaves. The yellow appearance of this "albinos" E. pentlandii is more precisely caused by an aberration called "schizochromism". Here, though, the specific green pigment (chlorophyll) is missing: every other pigment is present at normal levels, the dominant green colouration is lost, but will still more than likely have normal other pigments that give the yellow overall appearance of stems and the brownish colouration of spines. This yellow plant cannot grow on its own roots, and is grafted for convenience on tall green columnar cacti.
Habit: Simple at first it slowly ramifies from the base to form clusters.
Stem: Ovoid or cylindrical, but usually higher than broad, somewhat umbilicate at apex, yellow.
Ribs: About 9-12, sharp edged, broken into long acute, hatchet-shaped, tubercles, separated by acute intervals.
Areoles: Felted about 1,5-2 cm apart.
Spines: Variable, all radial or sometime with one central, often difficult to distinguish as centrals and radials, brownish. Usually less than 3 cm long, but often longer in old specimens.
Flowers: Diurnal, funnel shaped, variously coloured (depending clone), up to 6 cm long, 5 cm diameter. Tube relatively stout up to 1 cm in diameter. Inner perianth-segments, narrowly obovate, abruptly acute, spreading. Scales on ovary and flower-tube lanceolate with short-hairs in their axils.
Blooming season: Blooms are produced in spring and remain open for about three days.

Cultivation and Propagation: Albinos cacti are regarded as choice and difficult in cultivation, but despite that many of them are relatively easy to grow, but can survive only if grafted on a strong green base.
Exposure: Be aware that they cannot tolerate prolonged exposure to direct sun light (especially during the hottest summer days), so grow them in half-shade or under filtered sun.
Soil: Use mineral well-permeable substratum with little organic matter (peat, humus).
Watering: Water sparingly from March till October and keep perfectly dry in winter.
Hardiness. Keep in winter at temperatures from 5 to 15 degrees centigrade. (In general these plants are more tender and cannot endure freezing temperatures ) In the rest period no high atmospheric humidity!!
Propagation: Graft. Plants are grafted onto a green column-shaped cactus.