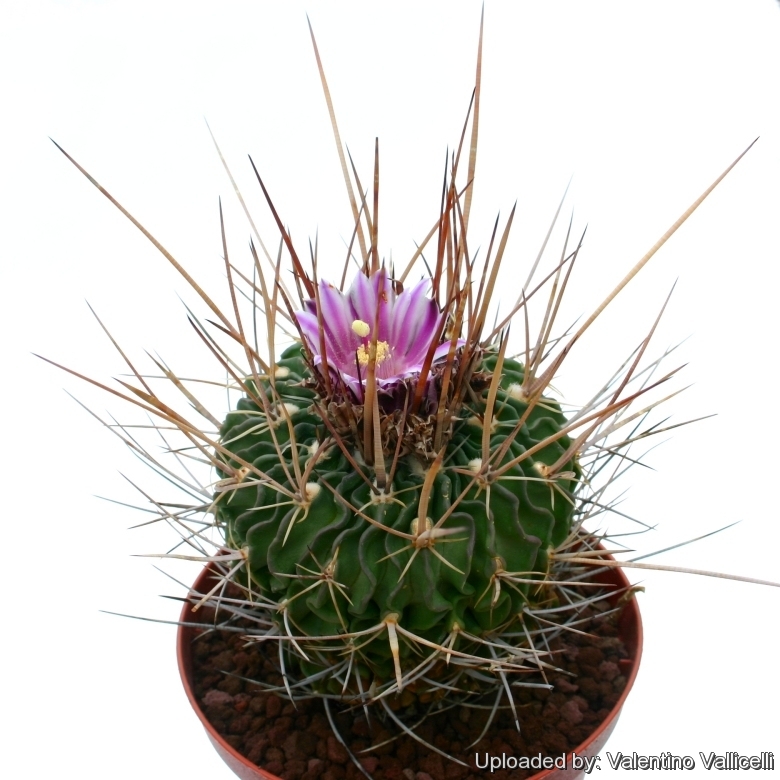 Description: Stenocactus hastatus (Formerly known as Echinofossulocactus hastatus) is one of the many geographical form of the widespread and morphologically variable Stenocactus crispatus. Many of its morphological and geographical variant was early classified as different independent species, but nowadays all this plant are considered part of a multiform species, where each form is linked to others by populations of plants with intermediate characteristics. The name Stenocactus hastatus is used to indicate plants characterized by long rigid and sharp spines, but similar plants are commonly found in other populations and to all intents and purposes it is a synonym of Stenocactus crispatus. The wavy dark matt green ribs contrasting vividly with the pale wool of the new areoles. The plant still found in cultivation under the name of Stenocactus hastatus are quite variable and the dissimilarity among seedlings spination may be considerable.
Solitary cactus with long sharp spines. The plants in cultivation are quite variable.
Stem: Flattened depressed-globose to short cylindrical, light green, 10-12 cm in diameter and tall.
Ribs: Up to 35, wavy with a triangular section, somewhat crenate;
Areoles: With white felt;
Central spines: 1 per areole, solitary, white or pale with brown tips, 4 to 8 cm long, more or less flattened, porrect, rigid and very sharp.
Radial spines: 5 or 6 short yellowish spines, the upper ones longer, up to 3 cm long.
Flowers: Large white or pink (the largest of the genus).
Fruits: becoming dry.
Seeds: Obovate, 1,5 mm long, brownish-grey, shining, finely punctate. 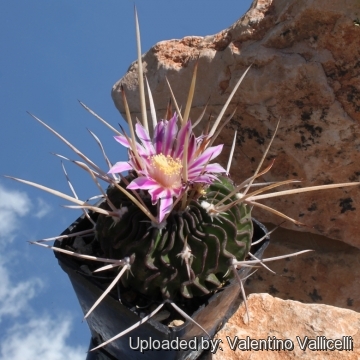 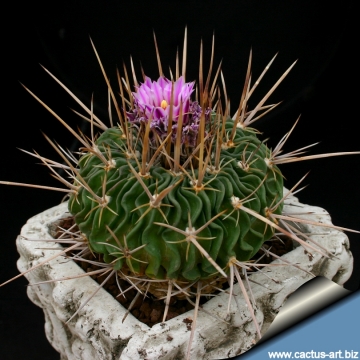 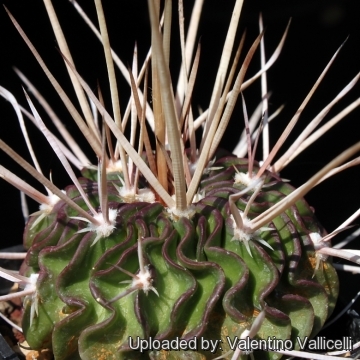 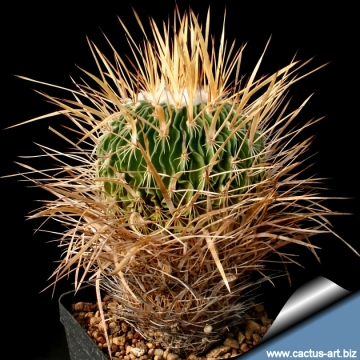 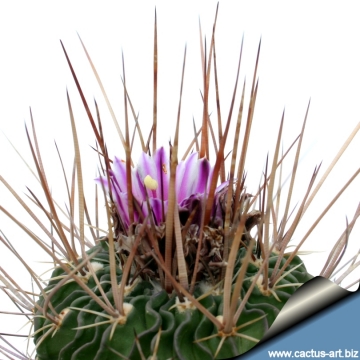 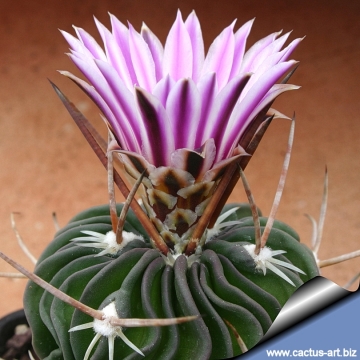 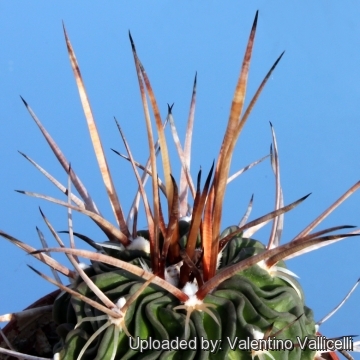 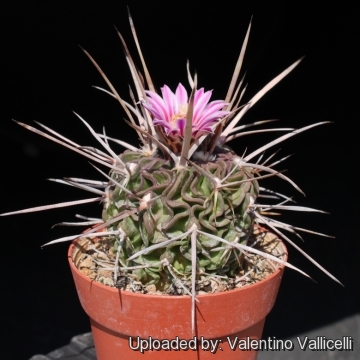 Cultivation and Propagation: Stenocactus hastatus is easy to to care cactus, recommended for any collection that needs lots of light with ample airflow.
Growth rate: It is small growing and easy to to care and very willing to flower. Because of it’s small size makes a great potted plant specimen, great for beginning collectors.
Soils: It needs regular cacti soil with little organic matter (peat, humus). Good drainage is essential along with good moisture retention properties and adequate nutrients availability.
Repotting: Repotting every other year. As it is especially prone to rot under-pot in a smaller container filled with very porous compost. Use pot with good drainage.
Watering: No absolute schedule can be given for watering as various factors (Soil mixture, containers, drainage, temperature, size of plant) influence water use, so - as a general rule - the soil should be thoroughly wetted at each watering during the active growing season (spring and summer), water when the top 1,5- 2 cm of soil feels dry to the finger. Do not soak the soil during the dormant period. Be careful, excessive watering can make root and/or stem to rots. Make sure there is good air circulation between plants. Care must be taken with watering as they tends to become swollen and untidy in growth habit if given too much water and shade.
Fertilization: During the growing season enrich the soil using a fertilizer rich in potassium and phosphorous, but poor in nitrogen, because this chemical element doesn’t help the development of succulent plants, making them too soft and full of water.
Hardiness: Reputedly sensitive to frost , but less so if kept on the dry side prior to, and during, cold weather (hardy to -5° C for short periods). However some warmth throughout the year will increase the grower's success (minimum 5° C during rest season). These cool temperatures develop sturdier plants and encourage the formation of flower buds.
Exposition: Outside bright sun it likes strong sunshine, but is tolerant and do well with light shade during the hot Summer months, inside it needs bright light, and some direct sun. Subject to sunburn if exposed to direct sun for too long. Tends to bronze in strong light, which encourages flowering and heavy wool and spine production.
Uses: It is an excellent plant for container growing. It always looks good and stays small. It look fine in a cold greenhouse and frame.
Pests & diseases: It may be attractive to a variety of insects, but plants in good condition should be nearly pest-free, particularly if they are grown in a mineral potting-mix, with good exposure and ventilation. Nonetheless, there are several pests to watch for:
- Red spiders: Sensitive to red spider mite. Overhead watering is helpful in controlling mites.
- Mealy bugs: Occasionally mealy bugs they develop aerial into the new growth among the wool with disfiguring results, but the worst types develop underground on the roots and are invisible except by their effects.
- Scales: Scales are rarely a problem.
- Rot: Rot it is only a minor problem with cacti if the plants are watered and “aired” correctly. If they are not, fungicides won't help all that much.
Propagation: Seeds (usually) or by the shoots of adult plants (if available). Seeds germinate in 7-14 days at 21-27° C in spring, remove the glass cover gradually as the plants develops and keep ventilated, no full sun for young plants! The seedlings should not be disturbed until they are well rooted, after which they can be planted separately in small pots. Cuttings of healthy shoots can be taken in the spring and summer. Cut the stem with a sharp, sterile knife, leave the cutting in a warm, dry place for a week or weeks (depending on how thick the cutting is). This permits the cut surface to heal, or callus. The callus helps prevent rotting when the cutting is placed in the rooting material. Once the callus forms, the cutting may be inserted in a container filled with firmed cactus potting mix topped with a surface layer of coarse grit. They should be placed in the coarse grit only; this prevents the cut end from becoming too wet and allows the roots to penetrate the rich compost underneath. The cuttings should root in 2 to 6 weeks. It tillers more readily than most other species.